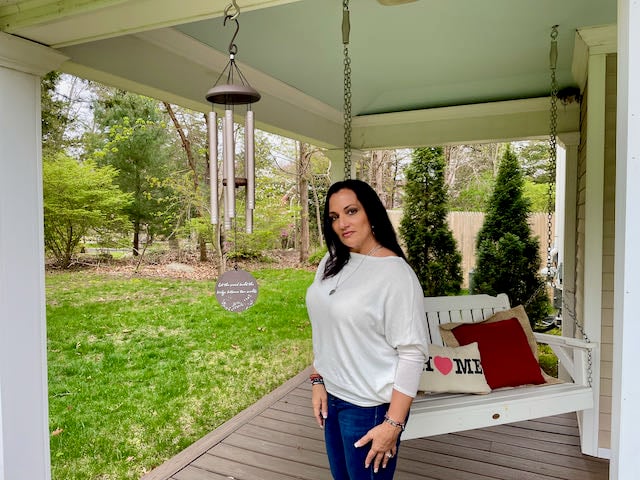 Above: Janine Passaretti-Molloy by one of the wind chimes she put up after Olivia died.

People say, ‘Oh, it’s only been a few months.’ No, it’s every single day we don’t have her 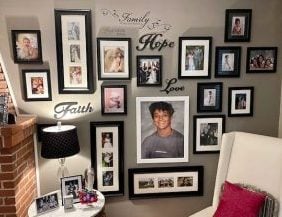 It’s been almost four months since the death of 17-year-old Olivia Passaretti and for Janine Passaretti-Molloy, each moment that passes distances her just that much more from her precious youngest daughter.

A large photo of a smiling Olivia hangs among a wall full of family photos in the Passaretti-Molloy East Greenwich home. “I see her, that face,” said Janine, looking at the photo, “and I say, I don’t know how you’re not here. You were just here. It makes zero sense to me.”

Olivia was killed while driving home from her sister’s when another car slammed into hers just before 1 a.m. on New Year’s Day. She died instantly.

The closeness of the Passaretti-Molloy family has stood out since that terrible morning. It was that closeness that prompted her older sister, Victoria, to go back out and look for Olivia after she arrived home and did not find her sister – who had left 15 minutes before her – there. They had spent the evening with their sister, Jacqueline, who lives in Warwick. Victoria retraced the route to Jackie’s, passing by the scene of the accident on Route 95 just south of Route 117. She turned around and learned the devastating news it had been Olivia. It was Victoria who had to deliver that news to her mother.

“I relive it every day like a movie and know each piece of what happened,” Janine recounted. “I relive it and I relive that sound – the worst sound I will ever hear, ‘Olivia is dead.’ I Facetimed them at midnight. They were all together. I said, ‘I’ll see you soon. Be careful. I love you.’ We all said, ‘I love you.’”

Today, Janine can’t believe she allowed Olivia to drive that night, New Year’s. She was usually so protective. But Olivia was an extremely conscientious driver. And Janine was happy to know her daughters would be together.

Janine said the family has always been intensely close, but that togetherness grew even tighter after her husband and the girls’ dad, Michael Passaretti, took his own life in 2015. (Janine has since remarried, to Dennis Molloy.)

The difficulty of that time still looms large – Olivia was 11, Victoria 16, and Jackie 17.

“We were on this life raft and one of us would fall in and it was like trying to get them back in, and then another one would fall in. I didn’t know who was next,” Janine recalled. “The funny thing is – not so funny – I thought, if I can get through this and bring my children up …” The rest of her sentence dangled in the air.

With all this heartache, Janine finds the circumstances of Olivia’s death particularly galling. According to police, the man accused of hitting Olivia’s car, Aramis Segura, 30, fled the scene after his car came to a stop, and was hiding at his girlfriend’s residence in Charlestown when police went there later that day and made the arrest.

Eyewitnesses at the scene said it looked as if Segura was driving as much as 100 mph and that he aimed his car at Olivia’s car; state police have not yet released an accident reconstruction.

But the hardest piece for Janine to swallow are Segura’s social media posts from Dec. 31, including one where he wrote he was going to drink and drive and “see if I can f*** it up.”

To Janine, that is a clear sign of intent. The Passaretti-Molloy family is urging the state Attorney General’s office to charge Segura with murder in the second degree, which requires intent. Right now, Segura is charged with leaving the scene of an accident, death resulting; driving to endanger, death resulting; obstructing justice; and driving with a suspended license.

He is being held at the Adult Correctional Institutions for violating his probation – in 2019, Segura got an eight-year suspended sentence with probation.

That eight-year suspended sentence is the tool by which Segura is now being held. Otherwise, he would be eligible for bail. For instance, in the case of Barbara Trojan, who was convicted last October in the drunk driving death of Patty Daniels, Trojan was out on bail for what ended up being a couple of years, while the case wended through the criminal legal  system and with COVID delays. Trojan had no prior record.

Janine just can’t understand why Segura was out in the first place and said Rhode Island needs to get tougher on repeat offenders. In total, since 2010, Segura has served three and a third years in prison.

“This is too many times our children are getting killed by habitual offenders,” she said.

“People say, ‘Oh, it’s only been a few months.’ No, it’s every single day that I don’t have her, that we don’t have her. That our whole entire life is turned upside down. I cry every single day. I go into her room – I keep everything shut because I don’t want it to not smell like her. I smell her pillows. I sit in her chair and I just cry my eyes out. Even if I find a reason to smile during the day, it’s not without a knife in my stomach.”

Status of the Investigation

According to Blake Collins, spokesman for the Attorney General, the investigation by the AG’s office and the state police is ongoing.

“Investigations of this nature are complex and involve crash reconstruction – a critical component for investigators to determine the circumstances of the crash,” Collins said, noting that Segura continues to be held as a probation violator. “This office is focused on completing the investigation and prosecuting a case with the goal of securing justice for Olivia and her loved ones.”

He added, “The Attorney General believes that the penalties for our most serious criminal driving laws – reckless driving and impaired driving resulting in death or serious bodily injury, as well as leaving the scene of an accident resulting in death or serious bodily injury – need to be updated and strengthened and looks forward to working with the General Assembly and stakeholders to achieve this.”

For Janine, she finds some comfort these days in signs. She said cardinals had been a special sign for Olivia after her father died that he was watching. “When a cardinal appears, an angel is near,” she said, repeating the saying they have used. “I haven’t left the house once without seeing a cardinal. ‘I hear you, I hear you,’ I tell her.”

Since Olivia’s death, they have decorated the front of their house with several wind chimes. “I hear them and it’s very comforting to me,” said Janine. “Sometimes I hear the chimes and they’re so loud. All of them are going off and there’s hardly any wind so it’s like someone’s actually over there shaking them.”

When asked what Olivia would think if she was here now, Janine said, “She would be amazed at the outpouring of support and love.” The family has received countless letters, cards, emails, social media posts and testimonials from people saying how much Olivia meant to them and how she helped them. 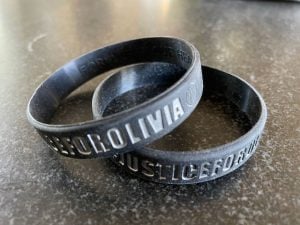 Olivia was a peacemaker, Janine said. She wanted to avoid conflict and urged forgiveness. Yet, Janine said she thinks Olivia also would want her to be pushing for change.

“For me, I feel like I can’t remain quiet when the injustice is so much. I can’t be idle. My child is dead and you’re going to know her. I want you to know who she is and how much of an effect her death has on all of us.”

Janine said she thought – before Jan. 1 – that she could imagine the pain of losing a child. She learned she was wrong.

“You can’t imagine the pain. It is way worse,” she said. “It’s unfathomable that you can be alive and feel this much pain. And now it’s still there and it will never go away. But this life, it wants you to keep moving because everything keeps moving. It doesn’t stop and it hurts more because I feel like it keeps pushing me away from her. Now I’m 111 days away from her. I feel like I’m moving, moving, moving and she’s still there and I can’t get to her.”