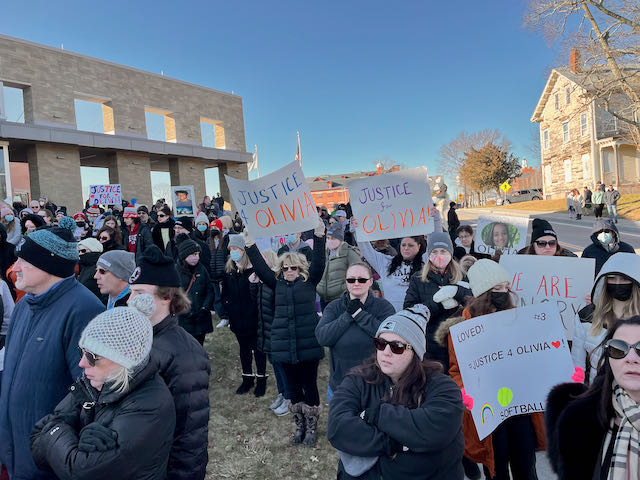 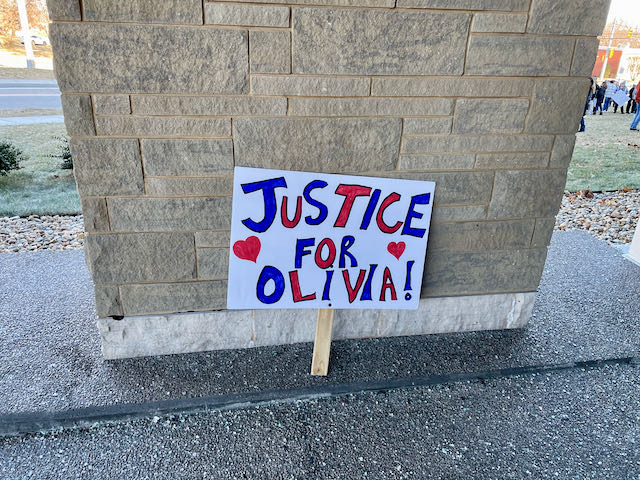 Friends and family of Olivia Passaretti held a rally outside the state Attorney General’s office in Cranston Saturday calling for Aramis Segura, the man charged with causing Olivia’s death early Jan. 1, to be charged with second degree murder. Segura has been charged with driving to endanger and leaving the scene of an accident, death resulting, and is being held without bail at the Adult Correctional Institutions for violating his parole.

Family members told the crowd of upwards of 250 people they were particularly upset because Segura, 30, of Charlestown, had a criminal record dating to 2010. They said he had not suffered the consequences of his previous actions and should not have been on the road that night.

Segura has been convicted of a number of felonies, including breaking and entering (x3), possessing a stolen car, larceny, conspiracy, burglary, child molestation, and sexual assault. In 2011, Segura was sentenced to two years in prison for the child molestation, sexual assault, and the first of his three breaking-and-entering charges. In 2019, he was sentenced to eight years probation for charges from 2016 and 2017 that included possessing a stolen vehicle and another of the breaking and entering charges.

The night of the accident, Segura fled the scene after the accident, walking south towards East Greenwich. He called his girlfriend – it had been her car he was driving – and she picked him up. First, however, she drove to the scene of the accident and told the troopers she was not sure that was her car. State police went to their home in Charlestown at around 8:30 that morning and took Segura into custody. His girlfriend has not been charged.

Family members also pointed to Segura’s social media posts from Dec. 31, which have since been deleted. Among them, he had written he was going to drink and drive and “see if I can f*** it up.”

Olivia’s two older sisters, Jacqueline and Victoria, also spoke. The three sisters had been together for New Year’s Eve, at Jacqueline’s home in Providence. Victoria and Olivia had come in separate cars and, after midnight, Olivia left first, with Victoria following 10 minutes behind. Victoria spoke about how she realized Olivia wasn’t home yet when she got back to the family house on Howland Road. She tried Olivia’s phone but there was no answer. She mobilized when Olivia’s girlfriend, Gracie Kauffman, checked in, saying she hadn’t heard from her either. 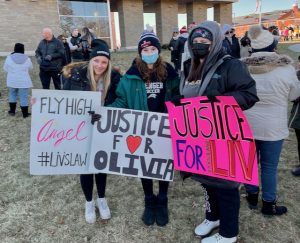 Victoria drove north on Route 95, passing what she could see was a major accident, she recounted at the rally through tears. She circled back but couldn’t see Olivia’s car and didn’t want to believe Olivia could be there. Eventually, however, she pulled over and spoke with a state trooper. Less than a minute later, several troopers approached.

“Then my worst nightmare became a reality,” she said. “They told me that it was her car and she was gone. My body went numb…. I didn’t understand how my baby sister could be gone. It’s a nightmare that I can’t wake up from. I had no idea how I was supposed to go home and tell my mother her baby was gone. My older sister and her boyfriend, that she was gone. Our whole family has been shattered.”

She added, “We will never stop until we get justice for Olivia.”

Dennis Molloy, Olivia’s stepfather, said, “We’re hopeful that through support of the community that we keep a light on this and [Segura] gets what he deserves. He’s not gotten what he deserves once in his whole life…. We’re not going to be satisfied with anything less than a second degree murder charge because that’s what it is.”

Segura is due back in Superior Court on his probation violation charge Feb. 9.