Waterfront Back on Council Agenda, Along with Distillery Ordinance

After an absence of more than a month, the waterfront noise ordinance is back on the Town Council’s agenda Monday night, May 20. In addition, the council will hear a preliminary review of the waterfront from sound consultant James Miller. They meet in Council Chambers at Town Hall at 7 p.m.; find the full agenda here.

The council hired Miller after hearing from waterfront area residents about frustrations over excessive late-night noise from outdoor music from Blu on the Water and Finn’s Harborside restaurants. Restaurant owners and their clientele reacted angrily to the proposed changes, prompting one council meeting to have to be moved from Town Hall to Swift Community Center to accommodate the large crowd.

The council will first hear from Miller, then consider the ordinance (Draft Noise Amendment), which proposes reducing the decibel (dba) levels to 60 Friday and Saturday nights but only until 11 p.m., after which the level would drop to 50 dba. On Wednesday, Thursday and Sundays, the level would be 60 dba until 10 p.m. before dropping to 50 dba.

“We will discuss the ordinance but it’s likely to be continued until we get results of Dr. Miller’s studies during the outdoor music season,” according to Council President Mark Schwager.

Miller has scoped out the area but since the live music season will only start this coming weekend, he has not yet taken sound readings.

Also on the agenda Monday, the Town Council will hold a public hearing during the second reading of an ordinance allowing craft and micro-distilleries in East Greenwich. The decision to consider the ordinance comes at the request of Aventyr Spirits of Exeter (Distillery Proposal), which is looking to open a craft distillery on South County Trail, in a complex shared by Linesider Brewing Co. 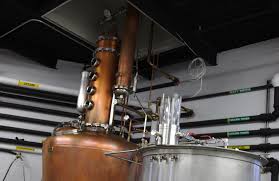 The Sons of Liberty distillery.

The Planning Board voted to recommend the ordinance to the Town Council at its meeting May 15.

The proposed ordinance (Distillery Ordinance) would restrict distilleries to areas in town zoned “manufacturing/light industrial” and only smaller distilleries would be allowed – those brewing 50,000 gallons a year or less. It would allow for a distillery to have a tasting room of a size limited to 30 percent of the total floor area.

Small distilleries, like breweries, have become much more popular in recent years. Rhode Island hadn’t had a distillery in 135 years when Newport Craft Distilling Co. opened in 2006, according to its website. Since then, Sons of Liberty opened in Wakefield and White Dog Distilling opened in Pawtucket.

The Town Council cannot vote on the ordinance until third reading.

If you like what you read here on East Greenwich News, consider supporting it by making a donation! We are a tax exempt 501(c)(3) organization dedicated to keeping East Greenwich a well-informed community. Click on the Donate button below or send a check to EG News, 18 Prospect St., East Greenwich, RI 02818. Thanks!