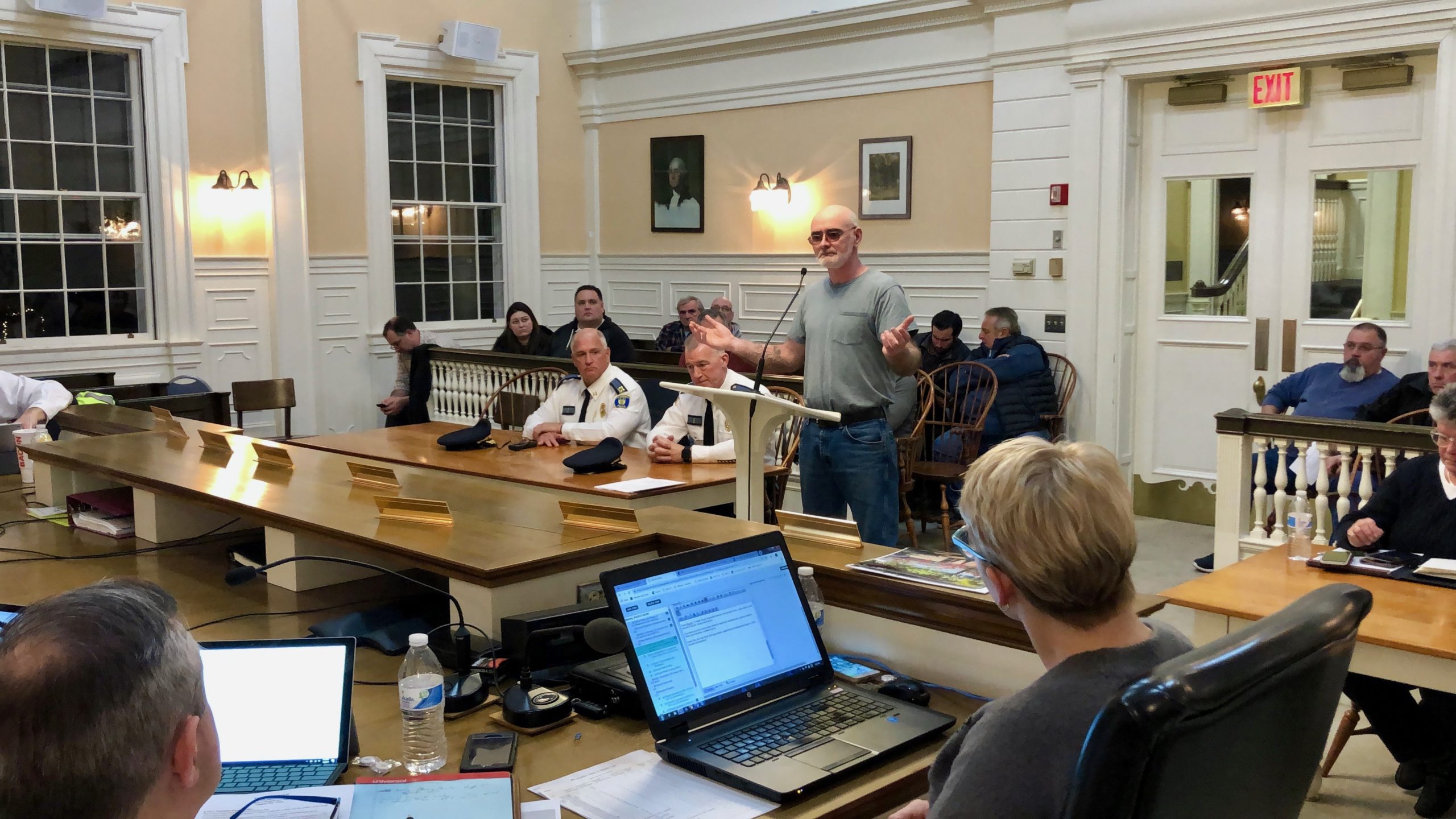 Above: Elisha Ellis, who lives on Long Street.

The Town Council got several ears-ful Monday night as resident after resident took to the podium to complain about noise, illegally parked cars, and drunkenness leading to public urination and fights by the waterfront during the summer months.

The residents begged the council to act to eliminate what they described as excesses caused by restaurants on Water Street, mainly Blu on the Water and Finn’s Harborside, both of which feature outdoor live music several evenings a week during the summer months.

“You’re talking to people and they’d say, ‘It’s terrible down here,’” Englehart said. While the council has plenty on its plate right now (the 2020 budget, hiring a fire chief, finance director and town manager, among other things), Englehart said they wanted to get the ball rolling on the noise ordinance before the summer season.

The draft ordinance before the council Monday night would decrease levels by five decibels in most categories but Town Solicitor Andy Teitz suggested overhauling the original ordinance, saying it was unnecessarily complicated (it has a total of nine decibel levels, according to the zone and time of day).

He noted that Warwick’s noise ordinance was more “minimalist,” with a maximum level of 60 decibels that drops to 50 decibels after 10 p.m. East Greenwich allows up to 70 decibels on the waterfront, dropping to 65 after 10 p.m.

Longtime King Street resident Joe Gelineau said things used to be better, but worsened in 2012, after Blu opened and the owners got rid of some noise-dampening curtains because they wanted to open things up for better views.

The view from Castle Street, with Finn’s Harborside at the bottom of the street.

One resident, who lives in and owns a multi-family apartment house on Castle Street near from the Harborside, said the situation was hurting his family and his rental business.

“It’s the Wild West down there,” he said. “I’ve got young kids. They’re up until 1 in the morning with the windows shaking. I’ve lost tenants because of this. It’s an ongoing problem and it needs to stop.” 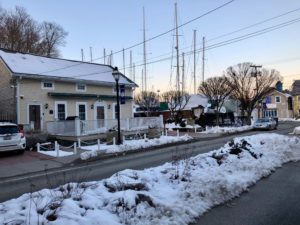 88 King Street with Blu on the Water in the background.

Pounding on the podium in rhythmic fashion to accent his words, Joe Gelineau said the real problem is the unrelenting pulse of the bass. Gelineau gave the councilors copies of police reports from two times when he called to complain. In both instances, the sound from Blu did not exceed the town’s decibel limit, and in both instances Gelineau invited the police into his house. As one of the officers wrote in a  report from Aug. 18, 2017, “I noted that the bass was in fact audible within despite that all the windows were closed tight.”

“The town is creating the environment. They’re allowing it,” said Elisha Ellis, who lives in the Long Street house he grew up in. The bands didn’t start up until the mid-1990s, he said. Before that, he said, he and his friends would sit by the water and listen to the sounds of the water lapping the shore.

“What it is now is hell, it’s something entirely different. It’s acoustic bombardment,” he said.

Residents also complained about the behavior of people pouring out of the waterfront bars at closing time.

David Agronick, who lives on Water Street, told the council people urinate and argue in his front yard. “I’ve seen people hit each other,” he said.

Police patrol the area but manpower is limited. The restaurants sometimes hire detail officers to help with traffic and crowds inside the various establishments. But, residents argued, the bad behavior often happens after closing time.

“Every weekend, it’s like a festival in your neighborhood,” agreed Police Chief Steven Brown. “It’s also traffic, people talking, this goes on all night long. So if you live there, it’s a very difficult situation.”

The Town Council discussed lowering the decibel levels to 60 or 50. After more than two hours of conversation and comment, they tabled the ordinance for revision.

No one from any of the Water Street establishments was in attendance. Acting Town Manager Joe Duarte said he had told the Chamber of Commerce about Monday’s meeting hoping the chamber would alert business owners.

Councilors said they hoped both business owners and residents would be part of the discussion going forward.

“I think we can do something to help them,” said Englehart after the meeting. “I don’t anticipate we’re going to please everybody.”