It started with two East Greenwich dads who both, it turned out, both liked making beer at home. One, Jeremy Ruff, an aerospace engineer, was ready to try something new. The other, Dan Koppen, recently retired from the NFL – including several years as a New England Patriot – also was ready for a new challenge. The more they talked, the more it seemed like maybe they could start a brewery together. Fast forward two-plus years and LInesider Brewing Company on South County Trail was born.

Ruff and Koppen, who both live only a couple miles away from the brewery, liked the idea of creating a destination place on Route 2, which is relatively far from Main Street’s amped up bar-and-dining scene. Coincidentally, the distributor they use to supply all their beer-making supplies (BSG) just happens to be on Division Road, literally between their homes and the brewery.

Right now, they offer nine beers on tap, everything from an American IPA Patience & Prudence to White Knuckles (a German-style wheat beer) to Union Jack (an English-style porter). It’s all made on the premises, where large beer-making barrels share space with tables and the bar.

The number of difference choices (and alcohol contents) was intentional. 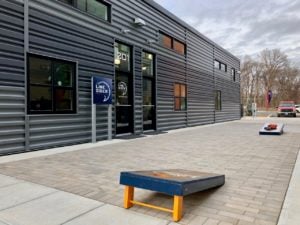 Linesider Brewing Co. is one building back from the street at 1485 So. County Trail.

“The feel we wanted for the place was you’re going to find something that you like,” said Ruff. “We want it to be a very inviting place and welcoming to everybody,”

Early indications are, they’ve accomplished that. There was a line waiting to get in on opening day, Black Friday. Ruff estimated there were as many as 1,500 people a day that weekend. The owners agree Koppen’s status as a former New England Patriot has garnered some welcome attention. But they are committed to keeping the focus on the beer.

“As time goes on, it’s going to come down to the beer. We want to get better with every batch,” said Koppen.

Linesider Brewing Co., 1485 South County Trail, East Greenwich, R.I., is open Fridays 2 to 8 p.m. and Saturdays noon to 5 p.m. While they do not serve food, they have a schedule of food trucks here.

Appreciate what you’re reading? Donate! We are a nonprofit providing news and information about East Greenwich. Use the Donate button below or send a check to EG News, 18 Prospect St., East Greenwich, RI 02818. Thanks!