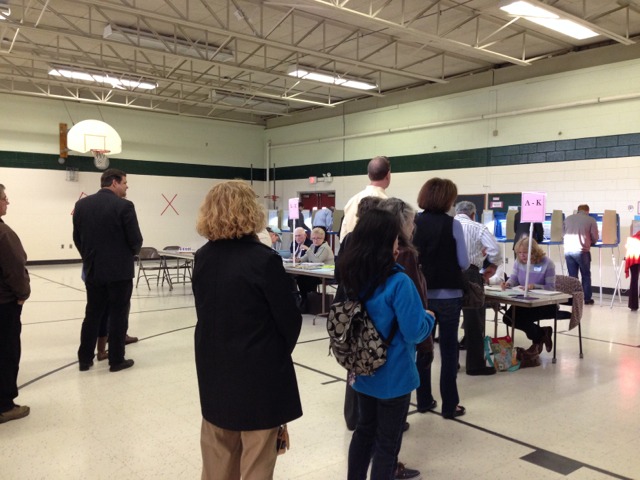 Election day got off to a strong start this morning, with voters lined up outside all five polling stations, waiting to get in and cast their ballot before work.

“People were lining up before the doors even opened,” said Town Council candidate Bill Stone, who was at Swift Community Center this morning. It was the same at Frenchtown Elementary, according to one volunteer.

That didn’t seem to deter voters, however. The poll moderator at Cole Middle School, where lines were out the door, said people were extremely patient and cooperative.

Voting itself took only about 10 minutes, according to people at the polls.

Many candidates and their supporters were set up outside the polling places. At Frenchtown, Town Council candidates Sean Todd and Mark Schwager and School Committee candidate David Green stood behind yellow chalk lines that marked a 50-foot radius around the entrance. By state law, anyone holding a political sign or actively campaigning must stay 50 feet back from the entrance to a polling station.

At around 7:45 a.m., police stopped by Frenchtown to make sure that all sign holders were maintaining the proper distance and to remind them about the rule. No one was in violation.

Most of the sign holders were there on behalf of local candidates. However, Rhode Island General Treasurer candidate Ernest Almonte had signs and supporters at several polling stations. U.S. Rep. James Langevin – who is running for re-election – stopped by midmorning to meet voters at Swift.

There were also representatives pushing for approval of Question 7 ($53 million bond for clean water and open space) at several polling places in East Greenwich. A woman from Roger Williams Zoo stood in front of Frenchtown, holding a sign and wearing a smile.

The most eye-catching campaigners were the Mark Gee supporters, clad in fluorescent yellow shirts. Gee, who lives in East Greenwich, is running against James Callaghan for state Sen. Dist. 35. At each polling place, there was a cart or wagon plastered with Gee posters and full of snacks for the mostly young volunteers. They were offering their food –  Nutella, donuts, Rice Krispie Treats, water, Gatorade, and more – to other candidates and their supporters, too.

The young Gee supporters did not seem to mind being around schools on their day off; in fact, they were all smiles. Children supporting School Committee candidates David Osborne and Michael Fain were out in force as well, holding signs in front of Cole, Frenchtown, and Hanaford schools.

If you have not voted yet, the polls are open until 8 o’clock tonight. We have everything about local races and ballot questions here.

“You can’t complain unless your voice is heard,” said EG resident Anthony Ucci after he cast his ballot.

Check back with East Greenwich News tonight for election results, and follow us on Twitter – @egreenwichnews – for updates throughout the day.