Rodney Bailey Makes One Last Trip to the Barn 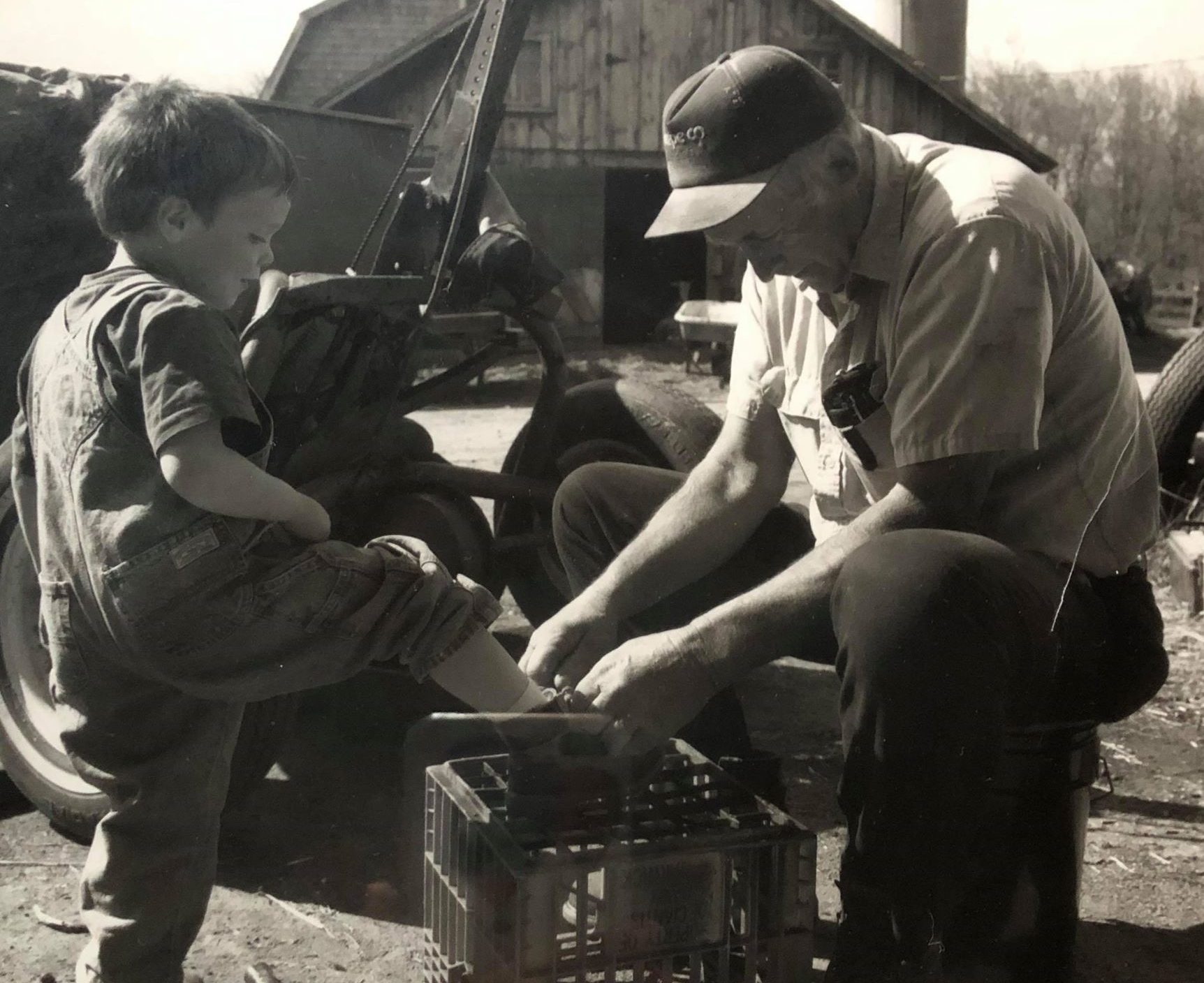 Rodney Bailey died Monday night, Aug. 3, at the age of 93. You can find his official obituary HERE. This is a remembrance.

A few days before he died, Rodney Bailey headed out to one of the fields at his farm on South County Trail to help his son, Paul, with haying. At 93, Rodney had slowed down significantly but he’d farmed that land his entire life and it just felt right to be working.

“He was trying to do what he loved to do,” his daughter Cynthia LePrise said Tuesday. But he couldn’t do it. He fell ill and his condition deteriorated quickly from there. He died at home, surrounded by his large family, Monday night.

Rodney Bailey was tall, quiet, hardworking, and beloved. He was the consummate family man, according to Cynthia and sister Kathy Burroughs.

“He would do anything for anybody. It was all about family with him. Family and the farm,” said Kathy.

Baileys have been farming in East Greenwich for generations. The original land grant was on Tillinghast. The family farmed on Middle Road for a time but they ended up on South County Trail, that large tract of open land on the east side of the road. They kept dairy cows until just a few years ago.

It was a great place to grow up, said Kathy. “It was about the best thing you can imagine.”

And it remained an important touchstone for the grandkids too.

“My whole life I thought of my grandparents farm as a paradise,” granddaughter Alexandra LePrise wrote on Facebook. “Fields of hay and corn to play in, shallow streams and ponds to wade in, geese and bulls to run from. But most importantly it was paradise because my family would always be there.”

Farming is, of course, a seven-day-a-week job. But Kathy recalls that her dad always made sure Sundays were special.

Rodney with his cows.

“Sundays were family days,” she said. “We would go for rides. Sometimes to Beavertail, to Newport – taking the ferry before the bridge was there – to other farms. Implementing some Tom Sawyer logic, Rodney would get the kids to help around the farm.

“He somehow convinced us that getting in the hay was fun,” recalled Kathy.  “We’d get the hay and then go get ice cream after. It was always fun. He made it fun.”

Rodney may have been quiet, especially compared with his whirlwind of a wife, Judy Bailey, a former town councilor (among other things) who died in 2013. But he was not above practical jokes. And he loved to tell a good story. He also enjoyed having fun with his grandkids that he did not want shared with their mothers.

Kathy only learned this week about an adventure her daughter Jessica and Cynthia’s son Matt had with their granddad. They were 12 years old and Rodney invited them to join him on a trip to a farm in New York State. Rodney wasn’t much of a drinker, but they ended up in a bar.

“And you know your mothers don’t need to know about this,” he told them. Jessica had kept her word!

Sometimes, Judy’s activities would put Rodney in the spotlight. One time, they even landed him in jail. It was the grand opening of the new East Greenwich Town Hall in 1995 (a significant renovation of the old Kent County Courthouse into a usable town space). As a town official, Judy had championed the project, so naturally, family members attended the opening. Rodney had a couple of the grandkids and they were exploring the basement, including the old jail cell there. Holding young Alexandra, Rodney entered the cell to get a better view of writing on the wall. Just like that, little Jessica shut the door. It locked and – they were quickly to discover – there was no key.

EG firefighters ended up taking the door off to release the pair. It was a few years before Rodney saw the humor in the situation, Cynthia recalled, laughing.

After Judy died, Cynthia started going with her dad to church at First Baptist on Peirce Street, the family’s church. “That was our special time,” she said.

After the pandemic started and in-person church was halted, Rodney would ask when they could go back. It happened that on July 26 First Baptist held an outdoor service at the Fry Farm right across the street from the Bailey Farm.

“We got there and he was dressed just as handsome as can be,” Cynthia said, so glad to be there.

After he fell ill a few days later, everyone spent time with him at the house. Along with the kids and grandkids, nine great grandchildren have been born in the years since Judy died.

“He loved those kids,” said Kathy. “Even at the end, he was still hearing them, enjoying the chaos.”

The last morning, when Cynthia arrived at the house and asked her father how his night had been, he said, “Well, I just got back from the barn.”

He hadn’t left his bed for three days.

“But that was the best thing,” Cynthia said. “He was back where he loved to be.”