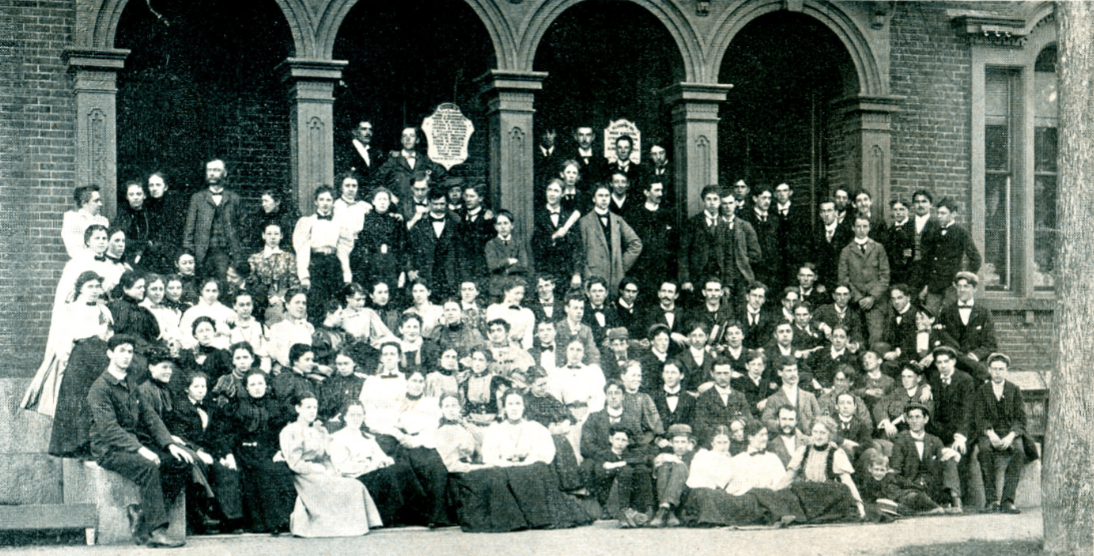 With his recent discussion of the 1896 dormitory fire and 1907 explosion, Alan Clarke has roused some interest in the old Academy buildings, so I thought people might enjoy seeing a couple of photos from two different eras. The first was taken in June 1897, the year after the dormitory burned down. Dr. Francis D. Blakeslee was still the principal. In the photo we see what must be the entire student body and the 13 members of the faculty posed on the front steps of the main building. (Dr. Blakeslee, I’m quite certain, is the tall mustachioed gentleman standing beneath the first arch on the left.) There are a couple of plaques on the wall behind them; it would be fun to know what they said. The one on the left looks like a list of names. At first I thought they could be past principals, but there aren’t enough names for that. Former students who fought in the Civil War, perhaps? Somewhere that information is available.

The second picture (see below) was taken 59 years later (and 65 years earlier than today). It’s the Class of 1960 when they were in the eighth grade in 1956. At the time the picture was taken the institution had been the East Greenwich High School for 18 years or so. The tradition of having group photos taken on those steps probably started with the building’s construction in 1858; it ended with this photo nearly a hundred years later.

It’s pretty obvious that in 1956 girls had to wear white ankle socks. The shorter bobby socks, worn by their much older sisters—always rolled down one turn—were popular in the 1940s. In 1897 girls didn’t show their ankles so we don’t know what color their socks were.

I see my brother Cliff Rice in the second row, third from the right. Many people will remember him as chef at the Charbroil. Today you’ll have to visit him in Ft. Myers. I didn’t know many of the eighth-graders, but I see Marian Bailey in the front row, first on the left. Marian had the distinction of being the first girl paper-carrier in East Greenwich. She persuaded Pete Haswell to hire her, and this opened the door for many other girls. When Pete discovered that girls were more reliable and less troublesome than boys, he came to prefer them. There were some decent boys delivering papers, of course; Joe Green comes to mind, for example. And I see Bruce Mastracchio, whom everybody knows, in the third row, third from the left, standing next to Johnny Pickells, who I’m sorry to say died way too young.

See anybody you know? Your grandmother, maybe? 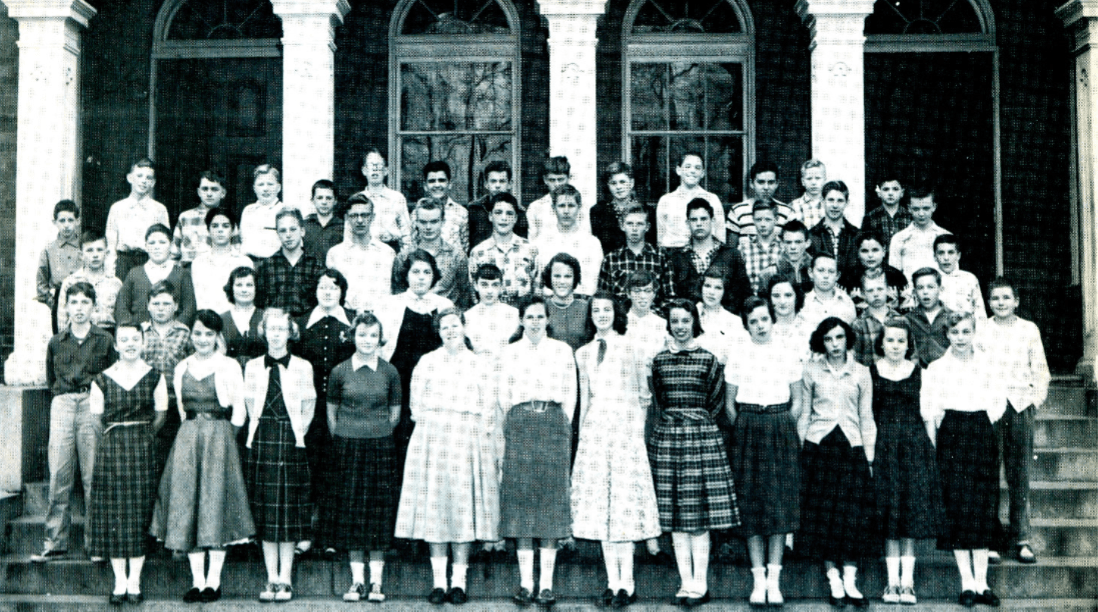 The 8th grade class of EG Academy in 1956. The photo is from the 1956 Crimson, yearbook of East Greenwich High School.

This isn’t the sharpest of photos, so you might want to examine the names:

Don Rice is a freelance writer based in Columbus, Ohio. His latest book is Who Made George Washington’s Uniform?