A Look Back: ‘Flames Envelop 3 Girls’ 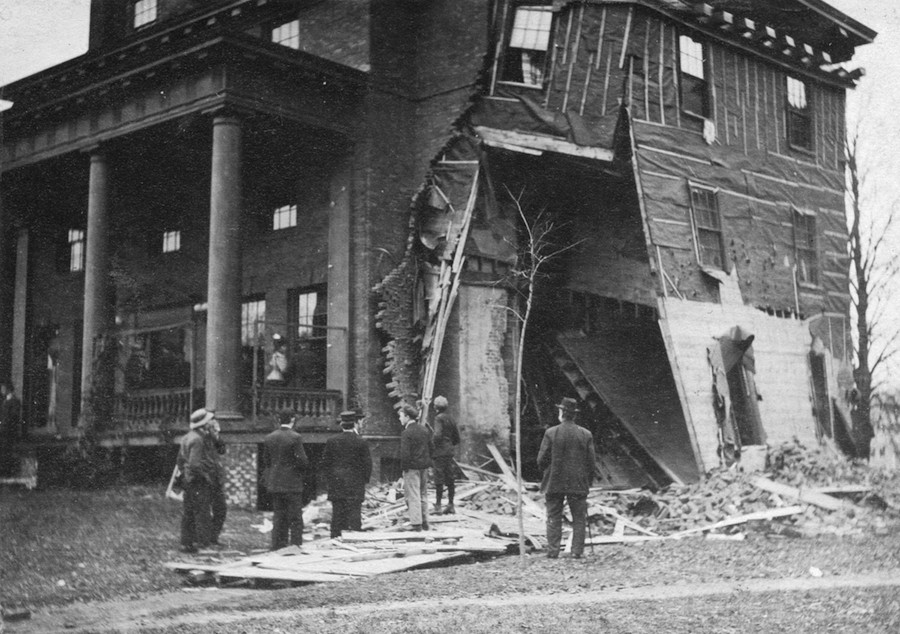 Above: Onlookers view the damage to the north end of Eastman Hall the morning after the boiler exploded, killing two girls and injuring one other. Several involved in the fire and rescue efforts had minor injuries.

Alan Clarke transcribed this Washington Times article from Nov. 13, 1907. It is more graphic than typical new stories today. Be warned. Also, the language used – ”dying” instead of “dead” – it’s unclear whether the author was reflecting the moment or it was a stylistic choice. This is a sad companion piece to a story posted last week, A Look Back: Fire at East Greenwich Dormitory, also transcribed by Clarke.

Two of Victims Will Die From Injuries Received

East Greenwich, R.I., Nov. 13, 1907 – Two girl students are dying, a third is painfully injured, and many had narrow escapes from death in a boiler explosion and fire in [East] Greenwich Academy’s new Eastman dormitory early today. The terrific blast tore out the entire end of the building in which the girls were sleeping. Many of the girls were thrown from their beds by the shock.

The flames burst so quickly from the debris that several were unable to escape down the blazing stairways, and were forced to leap from second-story windows. All were in their night clothes, and a number fell unconscious from terror and exposure to the chilling wind. Injured were:

Miss May Kellogg, 15; Holyoke, Mass., burned, cut, and bruised; out of danger.

The cause of the explosion has not yet been determined. Miss Kellogg occupied a room on the first floor directly over the explosion, and Miss Bissell and Miss Gould, the corresponding apartments on the second floor. The blast tore out both floors. Miss Kellogg’s bed fell into the cellar and landed upright so close to the furnace that the young woman was scorched by the heat. Miss Bissell and Miss Gould were sitting at a table in their room when the floor yawned beneath, and they went down in a smother of splintered beams, brick, and mortar. They were wedged so tight in the wreckage that it took the rescuers more than an hour to release them. The fire was raging furiously in the meantime, and streams of water had to be played constantly on the rescuers and victims alike to save them from death in the flames.

It was believed among the refugees on the campus that the unfortunates were being roasted to death, and several of the girls were so determined to join in the work of rescue that the instructress and attendants were compelled to use force to keep them from rushing into the blazing wreckage. The teachers were powerless to [quell] the panic which raged not alone in the Eastman, but in the other dormitories immediately after the explosion.

For over 150 years, East Greenwich Academy, also known as the Kent Academy, was an important private boarding school for students from all over the United States and internationally. It was on Peirce Street where the Department of Public Works building is today. The Swift Community Center was, at the time, the gymnasium for the campus. Rose Cottage, on the east side of Peirce Street, now private residence, was the headmaster’s home.

Eastman Hall was repaired and used by the private school until the campus was sold to the Town of East Greenwich for its High School in 1943. No longer a boarding school, the old building had other uses and was razed along with the other school buildings after the town’s new high school opened in 1956. The Swift Gymnasium, Olney Cottage boy’s dormitory and Rose Cottage survive. – Alan Clarke