A Look Back: Fire at East Greenwich Dormitory 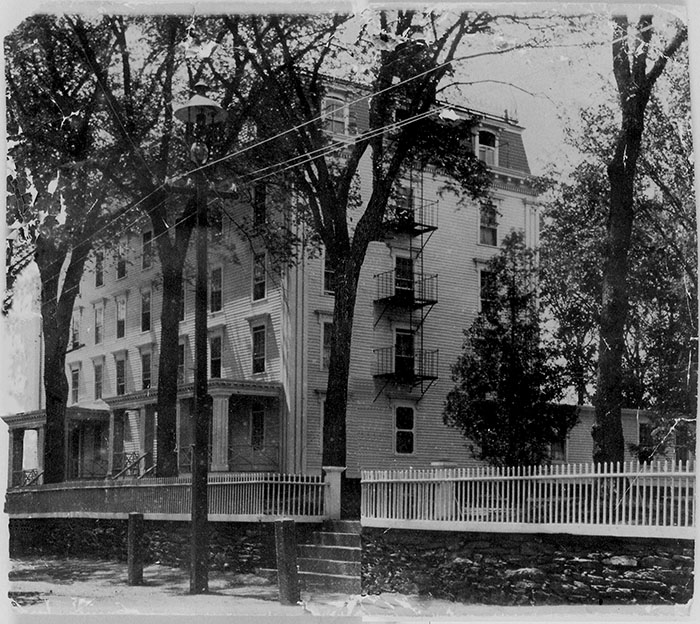 Local historian Alan Clarke transcribed this story from the then-Rhode Island Pendulum archives. The dormitory was part of the East Greenwich Academy, a private school that served as the high school for East Greenwich students as well as students from other cities and towns, including some who boarded there. The building sat on Peirce Street, at approximately 111 Peirce Street, the site of a building now that houses school and town offices. We are pleased to be able to share the story in its entirety here (complete with the several-line headline).  The photo above was taken circa 1890.

The Boarding Hall of the Academy Entirely Destroyed

The Blaze Started  Before 1 O’Clock this Morning

The Origin of the Fire is Wrapped in Mystery

Denial That It Was Caused By Electric Wires

The Building was untenanted and the blaze may have been the work of an incendiary. The loss on the building is about $8,800. Practically nothing saved.

The five-story boarding hall of East Greenwich Academy was burned to the ground between 12:30 and 2:00 this morning. The structure was built entirely of wood and was about 80 feet long by 35 feet in width. A wing to one story extended from the northwest corner for about 40 feet toward the west. This was about 18 feet wide and contained the laundry.

On the first floor were the ladies parlors and receptions rooms, the matron’s rooms and the large dining hall. The second, third, fourth and fifth floors contained the rooms of students and teachers.

The building was erected in 1846, just half a century ago. It had become much the worse for wear, although somewhat extensive repairing had kept it in fair condition for use as a dormitory and dining hall. A conservative estimate of its value would not place the loss on the building above the figures for which it was insured. 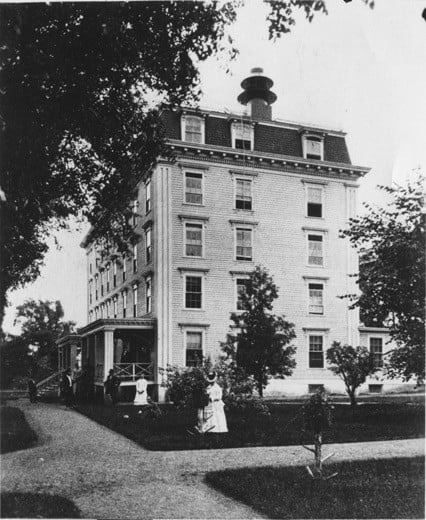 Side view looking south of original boarding hall at East Greenwich Academy. Destroyed by fire in 1896 and replaced by Eastman Hall. The building sat on Peirce Street to the left of main Academy building and closer to street, facing east.

Several of the students and all of the teachers who occupied rooms in the boarding hall during the school terms lost books, furniture and everything they had there. Among those who lost most heavily were Prof. and Mrs. T. C. Strickland whose rooms were No. 6 and one adjoining on the second floor. Among Prof. Strickland’s effects were two or three typewriters, a collection of books and bric-a-brac, etc. Prof. Strickland was Recording Secretary of the Methodist Episcopal Church of the village and it is supposed that all of the church records from the year 1836 were in his rooms and burned. He is spending his vacation with his family at Cottage City.

On the fourth floor were Prof. Snow’s rooms and whatever he had there in the way of books, furniture and wearing apparel was consumed.

In the south end of the building Miss Jennie Cox, teacher of the Art department, roomed on the second floor. Nothing in her room was saved. A valuable painting by her was hanging, however, in the reception rooms and Dr. Blakeslee carried this out among the few articles that were rescued from the flames. This painting was selected a few years ago by a board of judges to represent American Art at the exhibition in Paris and was prized by Miss Cox highly.

Miss Clara L. Jones, the preceptress, had rooms on the third and Miss Anna M. Starbuck on the fourth floor. Nobody could reach any floor above the first after the fire was discovered, and nothing was saved that belonged to either teachers or students.

Among the latter, it is impossible to estimate the losses with any degree of accuracy, for the reason that no member of the faculty except Dr. Blakeslee, the principal, is now in East Greenwich, and he knew comparatively little about the personal effects of students in the boarding hall.

Dr. Blakeslee’s family is away in New York State, and for the first time in 25 years or thereabouts the boarding hall was closed entirely during vacation. Not even the cook or janitor stayed in the building nights. No fire had been built in the kitchen ranges for weeks, perhaps, and it is rather mysterious how the fire started.

The building fronts on Peirce Street towards the east. It was directly in the rear that the flames were first discovered, apparently in Room No. 14 on the second floor, about in the middle of the structure. One theory is that the origin of the blaze was in the electric wires. The building is lighted by electricity. In the rear, about six feet from the side, stands a pole to which is attached the transformer, where the current is taken from the main wires into the boarding hall. Those who first saw the flames assert that they began to burn just at the point where the wires enter the building. They are of the opinion that defective wiring caused the trouble. The electrician who has charge of the wires of the town is quoted as saying, however, that the electricity had been turned off for several weeks and it had not been turned on again. If the theory of electrical origin is exploded, nothing else than incendiarism can be surmised as a possible beginning of the burning.

It was about 12:00 o’clock at night when smoke was smelled in the air. The Greenwich “special” had arrived at midnight from the city and the conductor Joe Hall, in going home from the station passed by the Academy grounds. He noticed nothing wrong. A few minutes later Policeman George S. Bennett and Ashton E. Porter and Ralph Leonard were sitting near the railroad station. Bennett and Porter are employed as watchmen there. They smelled smoke in the air and started up the street to investigate. On reaching Main Street, the light of the flames glared through the darkness and the men made haste toward the Town Hall to ring the fire bell, arousing the Chief Engineer Thomas H. Galvin and other citizens by their cries on the way. The peal of the alarm was soon piercing the night and in a remarkably short time enough of the Columbia Hose Company had gathered at Engine Hall to start a hose carriage up Peirce Street. Three nozzles were soon playing on the fire but the dry, wooden edifice burned like tinder and it was clear that the only hope was to protect surrounding buildings.

Dr. Blakeslee was sleeping in the Principal’s residence (Rose Cottage) across the street directly opposite the boarding hall. He says that cries of fire aroused him from slumber and he first went to an east window and saw nothing. People were running about on Main Street as he could detect from the sounds and he was about to retire again when he decided to go to the front door. Then the light of the flames was shining through the boarding hall windows directly in front of him. Policeman Bennett says that nobody had arrived at the fire when he and Porter got there. He tells the same story as others who arrived early about the location of its beginning, but has an idea that somebody set it rather than the electric current had anything to do with its origin.

The rapidity with which the flames climbed up through the third, fourth, and fifth floors shows how lucky it was that no students filled the rooms. They might have escaped with their lives, but there would have been no time to waste.

As soon as possible, Will Branch was dispatched on a fleet horse to the pumping station to warn the Engineer to keep the pump hard at work. Chief Engineer Galvin and Treasurer Slocum of the Water Company had their usual scrap when the former requested the latter to see that the water was turned off from the standpipe so that the hose might get the force direct from the pumps. The war of words was of necessity soon ended, however, and the water was turned off from the reservoir.

When the fire had eaten its way to the top of the building, showers of sparks and blazing cinders floated down upon the wooden roofs toward Main Street. The Principal’s residence and the Cashier Samuel M. Knowles’s residence next door were the most exposed but the better protected with slate roofs.  Incipient fires were repeatedly quenched by the fire boys, whose watchfulness and hard work receives nothing but the highest praises from everybody today. About 1:25 a.m. it seemed impossible for so small a company of fire fighters to cope with the scattering sparks everywhere. Even the platform at the railroad station, more than a quarter of a mile away, was ignited, and this morning was covered with pieces of charred shingles that floated down from the burning building.

Check back next week for a story next week about a calamitous event at the dormitory’s replacement, Eastman Hall.