This story has been updated since it was first published.

The School Committee has been moving toward suing the town – undertaking a so-called “Caruolo Action – for the past several months, after the previous Town Council gave them less than half the budget increase they had requested for the second year in a row. An audit they had done over the summer to assess the district’s compliance to the state-mandated Basic Education Plan showed the district had BEP deficits that totalled $1.2 million.

The $700,000 request represents a prorated amount since the fiscal year is nearly halfway done. Councilman Mike Donegan pointed out, whatever additional funds the town gives the schools would add to the baseline funding the town would be required to give the schools next year (referred to as “maintenance of effort”). He said $1.2 million alone represented a 2 percent tax increase. 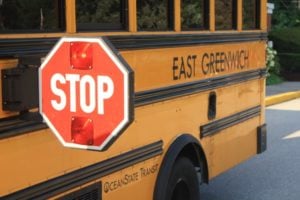 Former Councilman Andy Deutsch said in an interview after last month’s election that giving the schools less than they requested was a way to keep maintenance of effort in check. The side benefit, he said, was that the School Committee was forced to come up with creative solutions, including the bus waiver program. By giving parents a chance to waive out of bus service, the district was able to reduce transportation costs.

“You know what that was? That is a creative idea, an awesome idea that you don’t get when you have a blank check,” he said, suggesting the School Committee would not have come up with the waiver program if it wasn’t facing a tight budget.

“As a founding member of that subcommittee, and as the person who initiated the opt-out provision that now allows families to decline bus service that they will not use, I have to point out that the initiative predated the budget season that lead to the town’s level-funding the schools,” Musella said via email. “I first raised the issue in a transportation subcommittee meeting in October 2016. That a prior Town Council is trying to take credit for our transportation initiatives is flattering, but is wholly inaccurate. As a community member of that subcommittee, I was committed to finding waste.  And we found it – in the amount of approximately $200,000 per year.”

The town also took over some administrative costs in fiscal year 2018, with the idea again to lower the annual maintenance of effort, Deutsch said. That decision, however, was reversed this fiscal year, to ensure the district had a clear picture of per-pupil expenditure.

The previous Town Council cut property taxes in fiscal year 2018 and kept taxes flat this year, using $1 million from the town’s surplus to balance the budget. Deutsch said during the campaign the strategy had been to drive the town to a less desirable financial standing as a negotiating tactic with the unions. All five municipal union contracts are up in June.

Monday’s joint meeting also complies with the state law, which states the two bodies need to meet before the end of the year as the first step in new year’s budget process, to review revenue and expenditure projections.

The Town Council will meet in regular session after the joint session. On that part of the agenda, they will discuss seeking an extension on the state-mandated financial audit due Dec. 31. In addition, during executive session, they will be reviewing the 15 lawsuits and 36 arbitration cases facing the town.