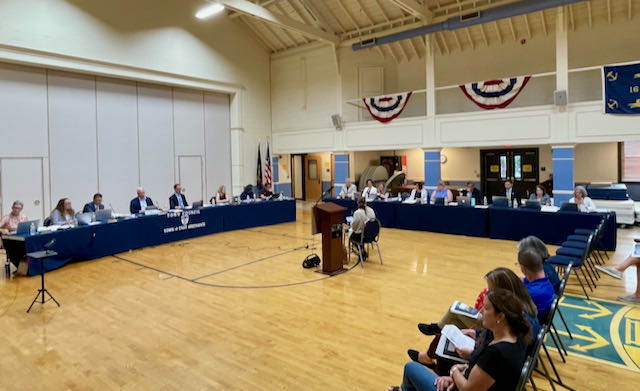 Above: The Town Council and School Committee met in joint session May 16 at Swift Community Center.

For the second year in a row, Town Manager Andy Nota’s budget allocation to the school district has come in lower than what the School Committee requested. The joint Town Council–School Committee meeting on the fiscal year 2023 budget Monday at Swift Community Center made it clear that this being the second time didn’t make it any easier to absorb.

The School Committee approved a $45.5 million budget in March that sought $39.2 million from the town, a 3 percent increase over the current year. Nota’s proposed overall budget of $79.67 million would give the schools $38.7 million, $500,000 less than requested. Nota said that was because the district has built up a fund balance of close to $4 million, suggesting it could comfortably use $500,000 to fully fund its budget.

For the School Committee, it is as if Nota is saying – for the second year in a row – the school district has more money in its fund balance than it actually needs. They disagree, citing the variability of enrollment and special education costs in particular, as well as the need to implement state-mandated but unfunded requirements, such as new “high quality” curricula.

Nota presented a look back over the past 10 years, showing the school district had maintained a fund balance far in excess of its stated policy of 1.5 to 2.5 percent of the budget (which right now would be just over $1 million). The town’s fund balance, however, is also not in compliance with its policy. Currently, it is at 14 percent of the town’s general fund; the town’s policy calls for a fund balance of 8 to 10 percent, and according to Nota, the plan is to increase it to 17 percent in coming years.

The School Committee is working to amend its fund balance policy, according to member Tim Munoz, chair of the district’s finance subcommittee. He said the district should set aside fund balance money in a reserve fund to cover special education, technology, and facilities. “We can’t build a capital reserve fund if the fund balance is seen as fungible and the town is doing the funging,” he said. He also noted the pandemic will continue to affect the school system in difficult to predict ways.

Munoz added the district wouldn’t have to go out to bond for small projects if it had enough of a capital reserve fund.

“I’m very optimistic that if we sit down with you we will come up with a fund balance policy that works for us,” Munoz said. “We want to talk with you guys. What we don’t want to do is have you put the gavel down. I think we are in a collaboration zone going forward.”

Nota acknowledged giving less than the school district asked made for a “tough conversation” a year ago, when he’d budgeted $600,000 less than requested. But, he said, “last year the school department finished with a $1.5 million surplus…. We feel confident that what happened last year [a comfortable surplus] will happen again this year.”

He said by town calculations, the school district is expected to end this fiscal year (June 30) with a $1 million surplus. Nearly $800,000 of that is already spoken for ($365,000 in this year’s  budget is coming from the fund balance and another $390,000 was just allocated to pay half the cost of the high school’s artificial turf field replacement), but that would leave more than $200,000 to add to the district’s $3.7 million surplus total.

School officials pointed out that not all the surplus was directly linked to the town appropriation. More than $2 million of the surplus comes from the district’s decision to pull out of a self-pay insurance platform so some of those dollars are from the state as well as from employees.

For some members of the Town Council, however, the surplus’s origin was less important than its existence.

“What you’re calling a cut I would not call a cut,” said Councilor Caryn Corenthal, responding to School Committee members saying the town manager’s budget cuts their budget.  “I believe everybody should be getting a raise. It’s time. On the school side as well. But I don’t think [using fund balance] would leave you in a bad position at all.

“I hear you say, ‘Everybody should be getting a raise.’ There’s a disconnect. Your placeholder is 3 percent, ours is 2 percent and you’re giving us 1.9 percent.”

Musella was referring to salary increases budgeted by both the town and school district based on employee contracts that have yet to be finalized, and the 1.9 percent increase in school district funding in Nota’s budget.

“We are a town of diversity of incomes,” said Councilor Renu Englehart. “There are a lot of people who are 55 and older … and they are unable to leave their homes because they cannot find affordable housing elsewhere.”

“We are very anxious to work with the council and the town to come up with a mutually agreeable fund balance,” said School Committee member Gene Quinn. “We can resolve this.

We’re not as far apart as it might seem.”

“I think what Tim is suggesting and you are suggesting would be really good to work toward,” said Donegan to Quinn.

There was the usual frustration over how East Greenwich gets so much less than most all other R.I. school districts. As Supt. Alexis Meyer put it, “The residents of EG fund the most of any school district in the state because of our property values and ability to pay.”

Donegan said to be careful what was wished for – that a recalibrated school funding formula would necessitate more money from the communities most able to pay, like East Greenwich.

There was only one member of the public to speak during public comment – Donna McPhee, a teacher at Frenchtown and president of the teachers’ union.

“Teachers in this district have not felt like a priority for a very long time, in terms of how we are respected as professionals or compensated,” she said. McPhee took pains to say she and other teachers loved their jobs and felt valued by students.

She said she didn’t see why the town couldn’t give the district the 3 percent increase it sought, instead of the 1.69 percent in Nota’s budget, adding that their raises over the years haven’t kept up with their health care increases. The proposed increase is less than last year’s increase of 1.9 percent, which was again not what the district had asked for.

McPhee said a 1.69 increase was not support for the schools.

Yet, there was also talk of collaboration and shared vision at Monday’s meeting. Part of that is the recent joint action to fund replacement of the artificial turf field at the high school 50/50 – the town and the school district will split the nearly $800,000 cost.

Part of that is the opportunity in the coming year to leverage state money for school construction. Convincing voters to support a potential bond referendum of $100 million (even if half would be reimbursed by the state) will require the town and the school district to work together.

“Overriding all of the conversations,” said Committee member Alyson Powell, head of the EGSD Building Committee, “[is the] focus on some of those larger issues together. We’re not competing. We’re a community.”

By town charter, a budget for fiscal year 2023 must be approved by the Town Council by June 10. The Town Council’s next meeting is