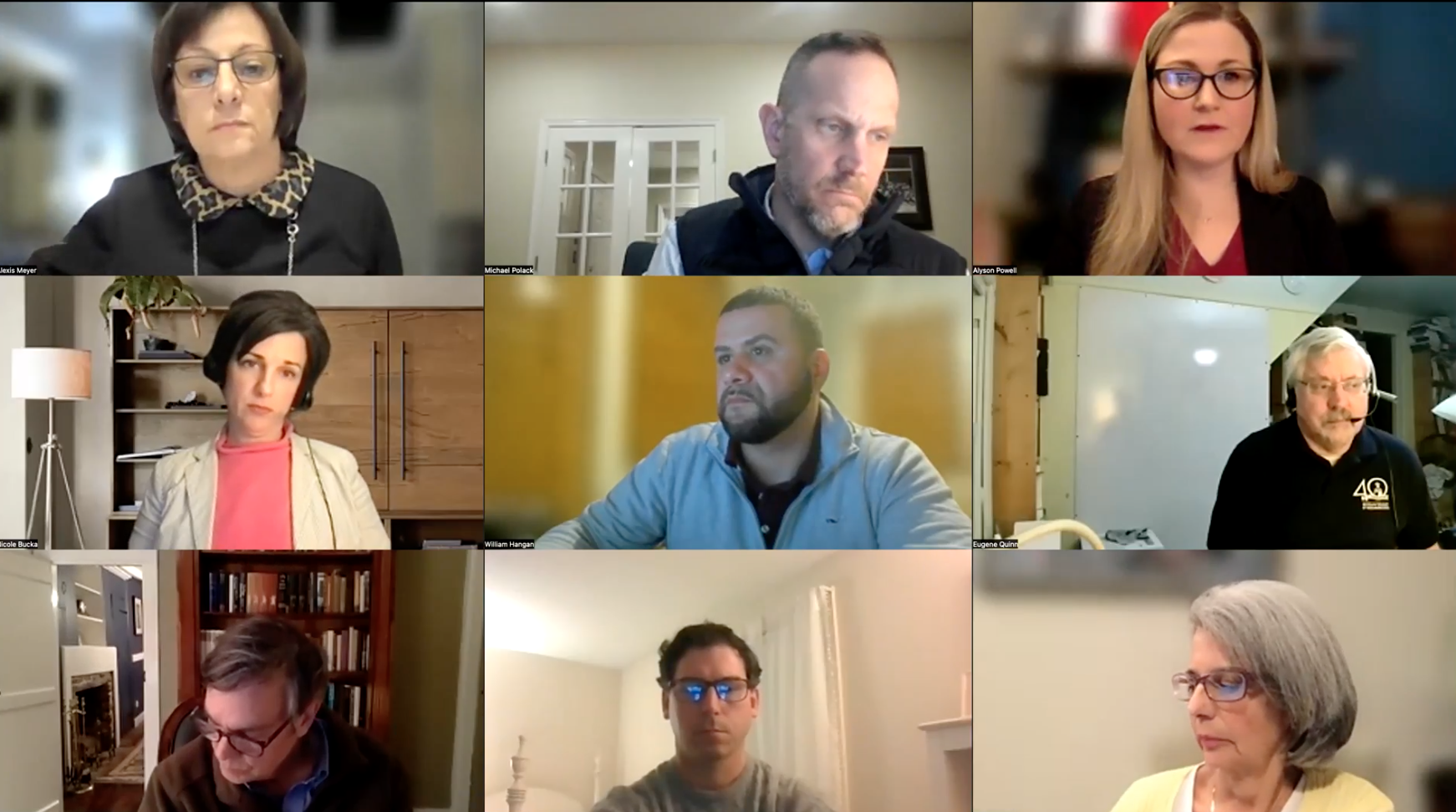 Supt. Alexis Meyer unveiled a $45.5 million budget proposal for the fiscal year 2023 at the School Committee virtual meeting March 15, an increase of $1.9 million over the current budget. It includes a request to the town for $39.2 million from the town, a $1.1 million (3 percent) increase. (Find a chart of the past seven years of budget appropriations below.)

This is a compilation of all the budget requests submitted by the district’s “budget owners” (principals, administrators), Meyer said. Those budgets have been presented to the School Committee in a series of budget workshops over the past two months; this was the first time the committee saw the entire budget.

The district’s budget must go to the town by April 15. As of now, the School Committee is slated to vote on it April 5, after the Finance Subcommittee takes a look at it March 25. The School Committee has one meeting, on March 29, before the possible vote.

This budget is a stepping off point, Meyer said, before the gavel comes down to make it official.

What’s in this budget? There are some positive revenue developments, particularly an 18.7 percent increase in state aid (from $4.4 million to $5.2 million) and rare decreases in health and dental insurance costs (down 3.76 percent and 8 percent respectively).

As is always the case, the largest expense is employees, with that budget number increasing by more than $900,000 to $26.5 million. Baked into that is a 2 percent salary increase for teachers; the teacher contract is up this summer and has not yet been negotiated.

Enrollment continues to go up, which can push the need for an extra teacher here or there as class sizes exceed contracted limits. As of Oct. 1 – the date the state sets for its annual count – East Greenwich schools had 2,535 students, up from 2,517 the year before. But by March 15, an additional 21 students had been enrolled, for a total of 2,556.

Meyer has budgeted for the addition of one teacher for the elementary level next year while noting that enrollment numbers can be a moving target.

“Things with enrollment change all the time,” said Meyer. “It’s really a changing scenario, sometimes on a daily basis.”

Out-of-district placements have stayed largely static, with fewer students attending charter schools (for which the district must pay) and more students opting for career-technical programs. 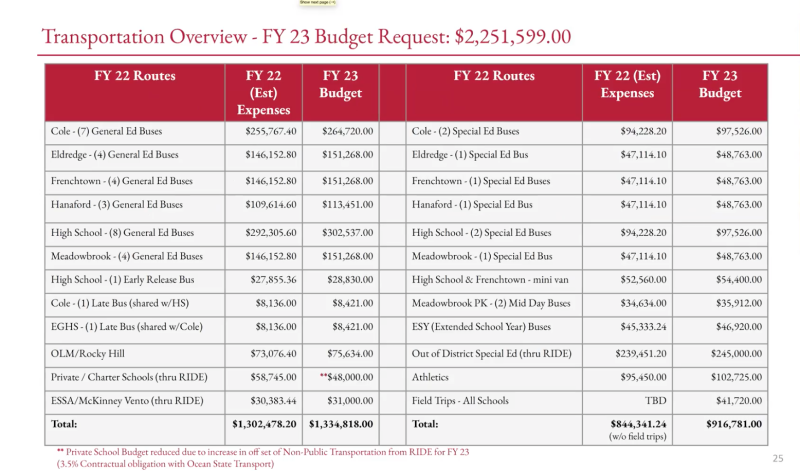 Other notable increases included technology and teaching and learning. The technology budget is up 20 percent, for everything from a town-wide software upgrade (MUNIS) and phones to the district’s new website and data security. Teaching and learning is curriculum and the district is investing in new curricula for grades 6 through 12. While there will be some ongoing expenses with any curriculum, startup costs are significant. In addition to the one additional elementary teacher, Meyer is proposing a one-year-only social worker (with the cost split between the district and a federal grant) and a .8 special ed teacher (cost similarly split), as well as a half-time speech-language pathologist and one full time custodian. The total cost to the district for these (including the extra elementary teacher) is $300,000. 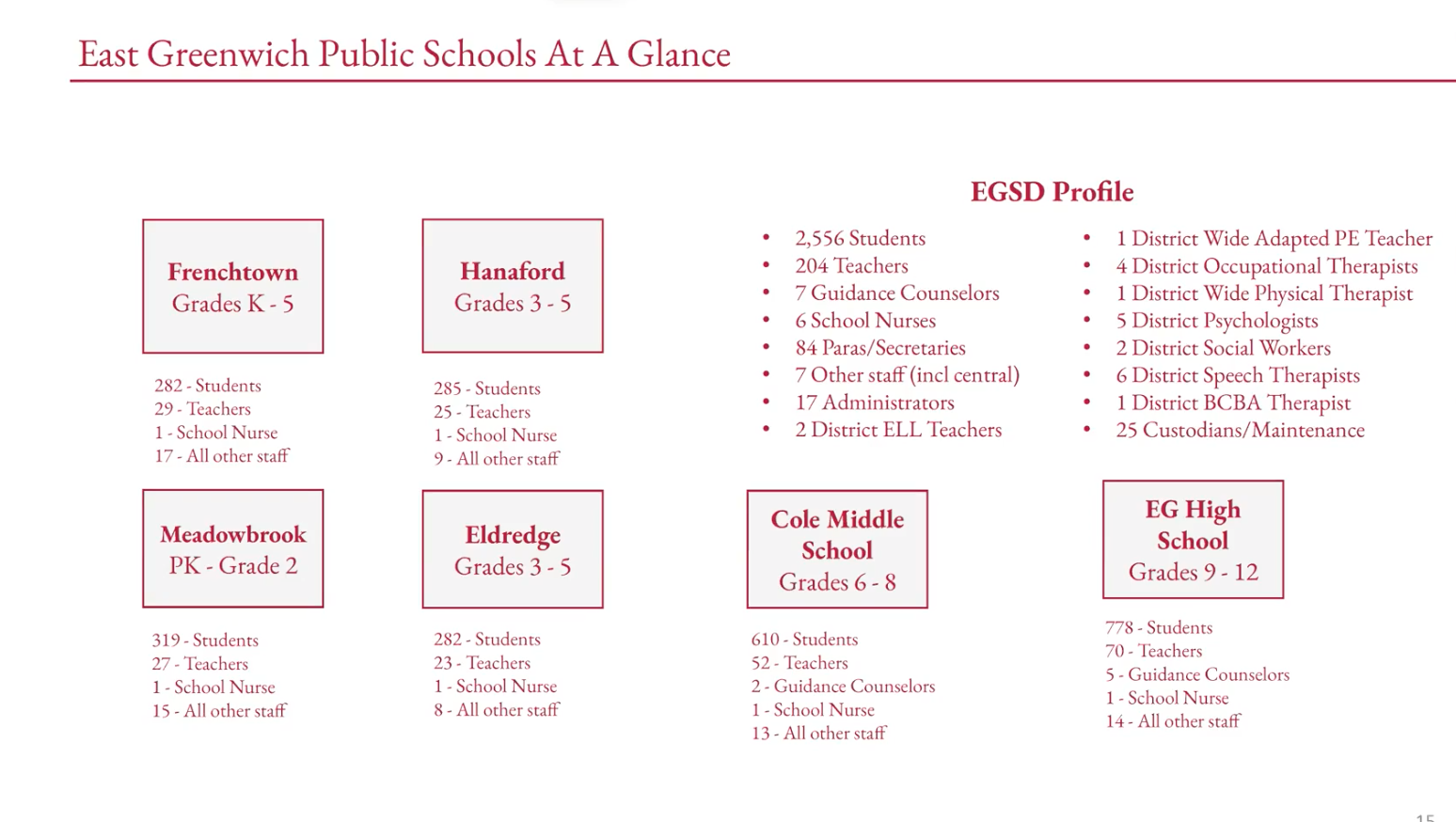 Committee member Nicole Bucka credited Meyer for the transparency of the presentation, noting the transportation information in particular.

“I really appreciate that,” she said, noting that the district pays for transportation for EG students who attend private or charter schools, as well as paying for books and student services for those students as well.

She asked whether or not the district had explored other ways of delivering transportation services.

Meyer said some districts own their own bus fleet. Others – like North Kingstown – hire independent contractors who drive their own buses (financed through the district).

“When we try to do something new in the district, the question always comes, does that increase the town tax appropriation?” he said. “I see how much we try to utilize those other funds [aka federal grants], but is it sustainable?”

After the meeting, Meyer said that is always a challenge, acknowledging that a new effort or position could be eliminated if additional grant funding was not found and the district could not fund it outright.

Munoz also thanked Meyer for the level of detail offered in her presentation (which you can find here: FY 2023 Sch. Committee Budget Hearing Presentation.

“I think it’s very helpful the way you’ve laid everything out,” he said. “It’s extremely clarifying to show the level of detail that you’ve done.”

Chair Anne Musella was absent from the March 15 meeting. The School Committee returns to hybrid meetings in April. The Finance Subcommittee will take up the budget on Friday, March 25, at 8 a.m. in virtual session. You can find the agenda, including the link to join the meeting, HERE. 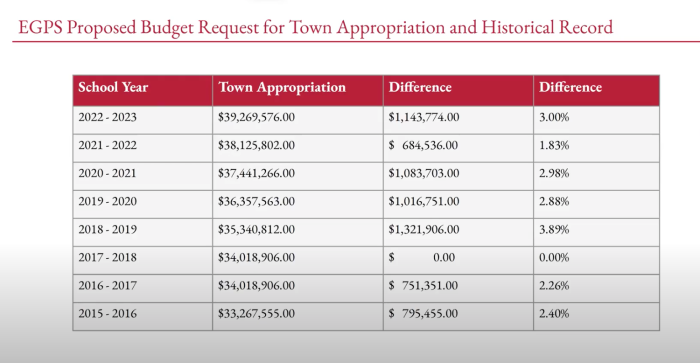