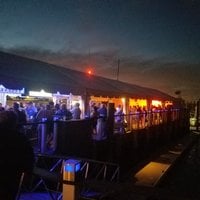 Waterfront residents had their say at last Monday’s Town Council meeting, when they voiced complaints about loud music and bad behavior. At the Town Council meeting March 11, it may be the restaurant owners and patrons who have their say, if a Blu on the Water Facebook post is any indication.

The Town Council is considering lowering the decibel levels allowed at waterfront establishments. The council will hear a first reading of the revised noise ordinance at the Monday meeting.

The post accuses the Town Council of failing to notify owners of Blu, Nautika and Finn’s Harborside – EG’s three waterfront establishments – about last week’s meeting. At that meeting, Town Council President Mark Schwager said he had told the EG Chamber of Commerce that the noise ordinance was on the agenda, but had not notified individual business owners. Council meeting agendas are public records; the agenda for that meeting was posted online and at Town Hall the previous Thursday.

By Sunday afternoon, the Facebook post had been shared more than 1,400 times and had more than 300 comments, many suggesting that residents who live near the waterfront should have known before they moved there that local restaurants featured live music. But several of the residents who complained last week said the situation had worsened in recent years.

At the March 4 meeting, the Town Council talked about lowering the decibel level at 60 (from a high of 75). Warwick’s limit is 60 decibels.

Also on the March 11 agenda (find it here), The EG Housing Authority will present its annual report, Acting Chief Tom Mears will present an overview of the fire department and National Grid will talk about a major gas line planned for South County Trail.

The council meets at 7 p.m. in Council Chambers at Town Hall.