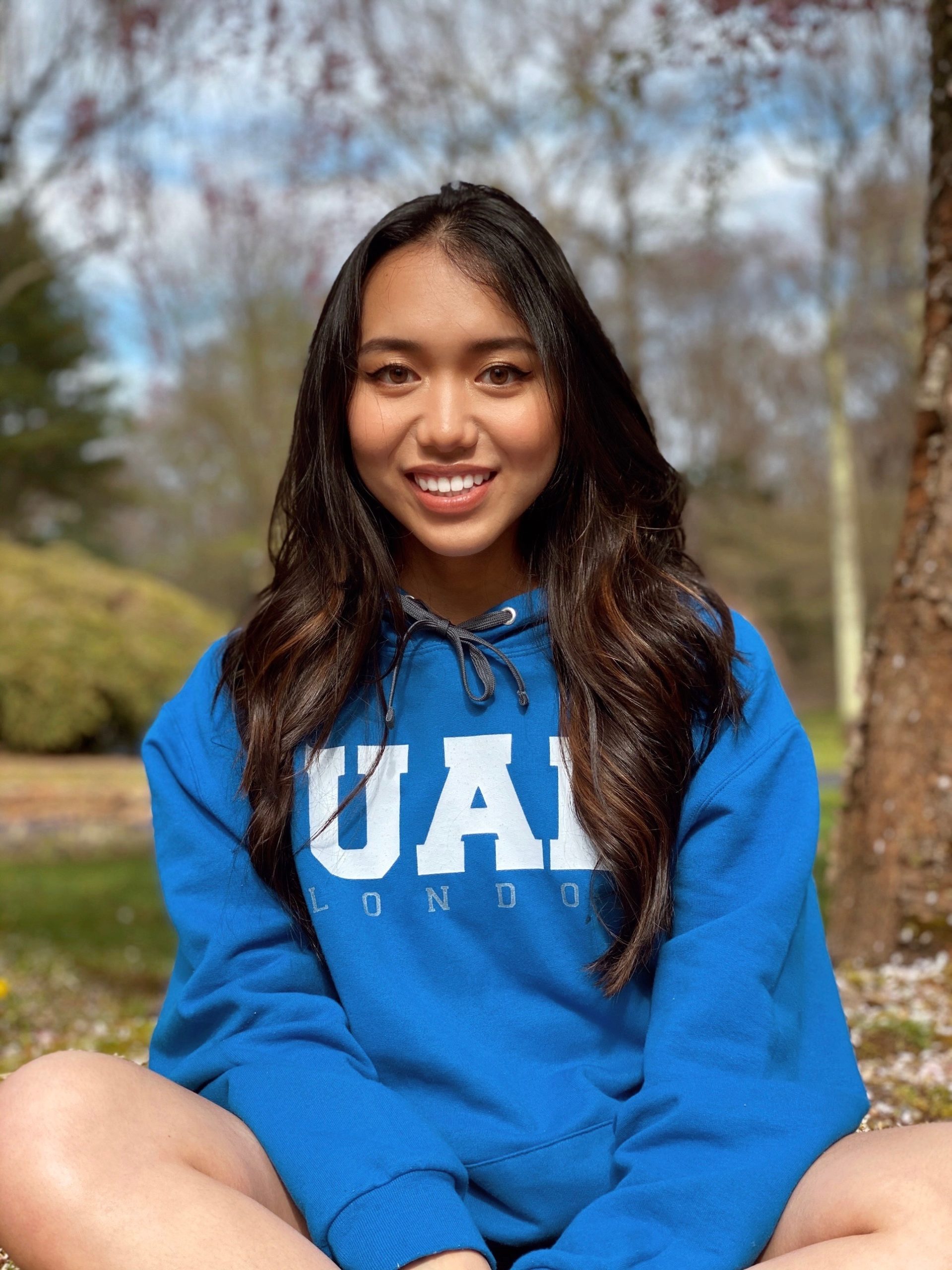 Entering her first day of high school, freshman Maleela Hong was experiencing a whirlwind of emotions. “I was slightly terrified. High school was completely different from anything I had ever done before,” she said with a laugh. Bubbly and bright eyed, Maleela had no idea what to expect from the high school. She had spent most of her educational career in private schools, and had only recently switched over to EG schools in eighth grade. Because of the team system at the middle school, Maleela didn’t know a large number of people in her grade. “I made it my goal freshman year to make new friends and connections with as many people as possible,” she recalled. “It was one of the reasons I chose public school actually. I felt like it gave me more of an opportunity to interact with different kinds of people.”

Despite her shy demeanor, Maleela has always been a vibrant, talented, and inspiring individual. She’s never been swayed by the want to be popular and has always stayed true to who she is. “I’ve never characterized myself into any so-called stereotype,” she explained. “I just wanted to be myself and let my name be the only label for me.” Extremely well rounded, Maleela excelled both academically and artistically since freshman year and quickly became a renowned name within the EGHS community. To this day, Maleela’s kind spirit and genuine nature inspire others to be the best versions of themselves. “I’ve always reminded myself that there’s no harm in being nice to others. I’ve learned throughout my high school career that a simple and kind gesture really speaks volumes,” she said.

Maleela (center) with friends during a Young Entrepreneurs of Providence (YEP) meeting.

Maleela’s high school experience has also taught her to open up more, becoming friends with a wide variety of people. Growing up, Maleela typically kept to herself and remained timid when around others. However, once she started high school, Maleela had a revelation of sorts. She said, “As time progressed, I realized I had so many passions and dreams that I wanted to accomplish, and none of them would ever come true if I didn’t speak up and do something.” Once she made this mental switch, Maleela’s horizon broadened. She joined several clubs such as Model United Nations (MUN), book club, and Future Business Leaders of America (FBLA). She also began to take her sport, karate, more seriously, and she just recently earned her black belt. “I’m so grateful to have taken part in those clubs,” she said. “Some of my best memories were made in them.”

No club changed Maleela more than Drama. “It was the start of a new beginning for me,” she said. The experience encouraged her to break out of her shell, and in doing so, Maleela discovered a new sense of confidence. Her first solo debut changed her life. Before her performance, no one outside of her family had ever heard her sing.”Singing is one of my favorite things to do, and it was always like my own little secret,” Maleela recalled. She describes the feeling of singing on stage for the first time as euphoric. “It was probably the most genuine performance I’ve ever done,” she reflected. “I will never forget how Mr. Petrucci’s and Mr Kenney’s [the directors’] eyes lit up when I sang the first note.” From there, Maleela began making covers of songs and posting them to her social media pages. With one of her videos, she entered a singing contest run by the Backstreet Boys, her favorite group, and won. They flew her out to their last Las Vegas residency where she met the band and even got a chance to sing with them. “I cried a lot after that whole thing, I’m not gonna lie,” she chuckled.

Maleela’s newfound confidence encouraged her to try new things, such as the RISD pre-college summer program. For her, the experience was not what she expected. Being surrounded by so many talented individuals was intimidating, and Maleela found it hard not to compare herself to them. She said, “[The experience] taught me to accept my faults, and that comparison on all levels, including looks, grades, hobbies, achievements, etc., isn’t productive.” Through her time in the course, Maleela found strength and self-acceptance. After working so hard to be perfect, she learned to celebrate herself for who she is and what she can do. We have to accept that. While it was at times hard to swallow, I don’t regret taking the course one bit. I came out a much more resilient and strong willed individual.”

When Maleela began to look at colleges, she made finding a major that aligned with her interests a top priority. As an artist, Maleela knew she wanted to be able to continue to grow and hone her skills in a variety of different mediums such as painting, drawing, and music. At the same time, she also wanted to be able to pursue her passion for entrepreneurship. “I needed to find something that would incorporate both sides of my true self,” she explained. “Art has always been a part of me, and it’s allowed me to express how I truly feel. And entrepreneurship, I love it. It’s limitless, and just about anyone can do it with the right mindset.” By November of her senior year, Maleela was set on going to either RISD or Northeastern, even though neither of the schools seemed to have exactly what she was looking for.

However, after stumbling across an art school in England while scrolling online, Maleela’s plans changed. The school had both the business and art qualities she was looking for, and immediately, Maleela knew it was for her. Soon after, she sent in her application and waited for the school’s decision. Thinking back to her mindset this past winter, Maleela doubted her chances of getting in. “I did my application in an unorthodox fashion,” she explained. “Not only did I include my art pieces, but I also included song covers that I did, and I wasn’t sure how admissions would feel about them.” Despite her uncertainty, Maleela unsurprisingly received a yes from the school, and will be attending the University of the Arts London this fall. She plans to major in design management through a three year bachelors program that combines her interests in art, design and business.

As an international student, Maleela’s fall remains very uncertain. Her school has decided to postpone its start from September to October, and Maleela hopes this will be enough for her to be able to attend school on campus. If not, learning might prove difficult given her major. “It’s an art school. It’s going to be difficult to learn and do art while not at the school,” she said. Despite the circumstances, Maleela has taken the pandemic and quarantine in stride. Instead of focusing on what she’s lost, she’s made an effort to take count of all the things she has. “The virus has taught me to become more appreciative of the little things in our lives, such as my relationships with family and friends,” she expressed. “It’s really unfortunate that the best part of senior year has been taken away from us, but everyone is doing everything in their power to make it somewhat special. We as seniors just have to accept it and make the most of it.”

As for her future after college, Maleela wants to change the world for the better, either as a CEO, entrepreneur, or both. “I want to connect with a ton of people around the world, and I want to impact others,” she said. And, thanks to East Greenwich High school, Maleela feels confident that she will be successful. “The teachers truly put so much work into you and your classes. It all comes from the heart,” she reflected. “I strongly believe they, as well as everyone else in the EGHS community, made me who I am today, and I cannot thank everyone enough for that. EGHS has granted me with so many opportunities that I’m sure many other high schools couldn’t provide, and for that I am extremely grateful.” From her supportive family, inspiring her to follow her dreams, to her loyal friends, always being there when she needs them, Maleela wants to thank everyone who has helped her over the past twelve years of her educational experience.

“I come from an immigrant family who escaped from Laos and Cambodia during wars in Asia. They’ve all worked and sacrificed so so much to give my little sister and I the life that we have now. Even though I’m sentimental about graduating high school, I’m so incredibly relieved that I get to put this chapter to an end, and the fact that I know I did this not only for myself but for my family. And, they’re proud of me? That is more than I could ever ask for. Graduation or no graduation, prom or no prom, I still made it. We still made it. Congratulations to class of 2020, and thank you East Greenwich High school.”

Miss Maleela Hong, oh the places you’ll go! You will be dearly missed, but we are all looking forward to seeing your future successes unravel!