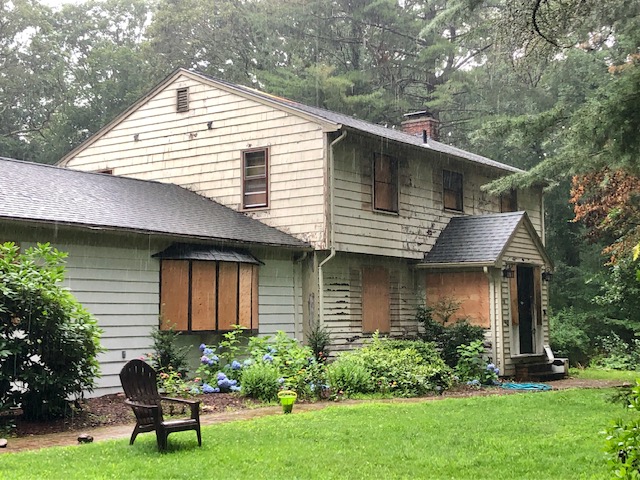 Eric and Peggy Prosseda are feeling strangely fortunate these days. Glad the fire that may well have totaled their house took place during the daytime, when everyone in the house was awake and could escape quickly.

Glad they live in a community where neighbors took in their pets for 10 days after the family had to decamp to a hotel. Glad to have friends and strangers offer furniture, hand them Target and Walmart gift cards, even knit baby blankets for 18-month-old Nina who had lost hers.

Glad to be together in a empty-ish rental house less than a mile from their High Hawk home, even as they begin the mountainous task of rebuilding their lives.

The fire took place on Thursday, July 4th, in their basement (find that story here). The Prossedas have five children, four sons and one daughter. They were all home that holiday morning. Two of the boys were in the basement when the fire started in a dehumidifier. They went upstairs and spread the alarm but it took a minute or two for everyone to register that this was a real fire and not just something that got burned in the kitchen. 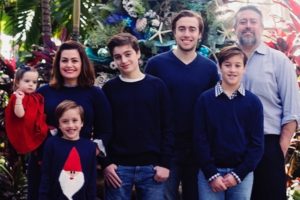 Eric and Peggy Prosseda and their children.

Eric Prosseda with his oldest son, Dante, 20, at first thought they could douse the fire using a garden hose. Eric said he couldn’t even see where the fire was in the basement, already the smoke was so thick. Still, he sprayed water where he assumed the fire to be. Then he heard a pop.

“All right, Dante, we’re done,” Eric told his son. They called the fire department, then realized one of the two family dogs was still in the house. Finn, a 14-year-old pug, hardly ever left the family room, Peggy Prosseda said. Eric went back into the house to find Finn but the smoke made a search impossible.

“I couldn’t see a foot in front of me,” Eric said.

By then, EG firefighters had arrived. Eric and Peggy told their children Finn probably had gone quickly.

“I looked up and one of the firefighters came out with Finn in his arms,” said Eric. The dog had been found in the garage, wet and sooty. It seems she’d figured out she’d better get out of the house. When the firefighter reached the Prossedas, Finn looked up. The dog was given some oxygen on the scene and, remarkably, she’s OK.

“The firefighters were great. They were so calm,” said Peggy, admitting she was anything but calm that morning.

“I felt really bad,” said Eric about the firefighters having to work on the nation’s birthday. “This was their 4th of July. They didn’t want to be doing this.”

It was a hot day too. Firefighters would cool off, Eric said, then have to go right back into the house.

While the house wasn’t burned down, smoke, water and structure damage make it uninhabitable. The family doesn’t really know what happens next.

“It’s uncharted territory,” said Peggy. The support from the community has meant more than they could have known.

“I think of how often people send out requests to help with this person or that. You never know if it helps. It does,” Peggy said.

“It was surprising how much we needed the help,” said Eric. “Gift cards just made it easier to buy seven pairs of shoes.”

They moved into the rental house on Saturday and got wifi and cable on Wednesday.

Yet, they remain grateful.

“We’re lucky, super, super lucky,” said Peggy. They know of others who have had house fires who have not been so fortunate. And, said Eric, “we live in a community where everyone is so supportive.”

A family friend started a GoFundMe campaign for the Prossedas. Find the link here.