A fire Thursday morning, July 4, at a house on High Hawk Road off Frenchtown Road displaced residents but no one was injured.

EG fire got the call at 10:30 a.m. and by the time they arrived, according to Chief Bernie Patenaude, there was a “heavy amount of fire” in the basement.

One of the homeowners, along with his adult son, were in the house looking for their dog when firefighters arrived. Firefighters got the two men out and found the dog, who was given oxygen. The two other residents had already gotten out. 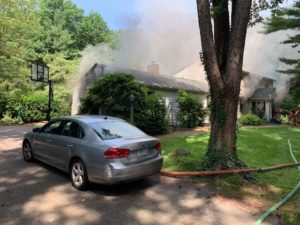 The fire took place in the basement at 1595 High Hawk Road.

In addition to all EG eight firefighters on duty (and three who came in from home), several trucks from North Kingstown fire also responded. Thursday’s fire was made more complicated by the weather, Patenaude said. Temperatures in the mid-80s with high humidity meant firefighters needed to be swapped out more frequently.

Patenaude, who was not on duty Thursday, said Capt. Ken Montville took command with help from North Kingstown fire officials. The EGFD currently does not have a deputy chief and there is no money for one in new budget.

“The guys did a heck of a job to make that stop,” said Patenaude. “They took an incredible beating when they got there,”

Basement fires can be particularly challenging, he explained, because the basement stairs act as a chimney and the firefighters need to go down that “chimney” to get to the fire.

The house currently is uninhabitable, but it’s unclear whether or not it will be a total loss. The state fire marshal is investigating the cause of the fire. If you like reading about East Greenwich, consider supporting East Greenwich News, a 501(c)(3) nonprofit news website. Use the Donate button below or send a check to EG News, 18 Prospect St., East Greenwich, RI 02818. And, thanks!