“That’s interesting because it was actually buried under expenses” in the 2018 budget, said Dykeman. “It was the only revenue line that was buried in the fire department expenses, to reduce the overall budget in appearance of the fire department. I had to physically move it up to revenue…. If I printed a report from Munis [the budgeting software], you would still see it reducing the expenses of the fire department.”

Except it doesn’t reduce the fire department’s budget. It increases it.

In the Corrigan/Dykeman 2018 budget, rescue billing is listed with fire department expenses (find it on page 33). But, it is listed as an expense.

Dykeman said Monday night she inherited the problem from the previous administration. Former Town Manager Tom Coyle’s proposed 2018 budget, however, did not have the rescue billing revenue line listed under expenses, nor did budgets for 2017, 2016, or 2015.

Instead, rescue billing in those earlier budgets is listed as fire department revenue. 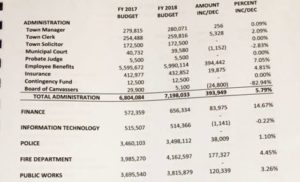 The total budgeting error is $1.4 million, since the $700,000 rescue billing revenue – the highest revenue line in previous budgets after taxes – is not counted as revenue anywhere in the budget.

A emailed request for clarification Monday night got this response Tuesday from Town Manager Corrigan:

“In the Town’s accounting systems the previous administration had incorrectly included rescue billing revenue in the Fire Department as expense lines. The print out of the budget from the Munis system clearly shows the $700,000 rescue billing revenue as a Fire Department expense. As Ms. Dykeman mentioned last evening, it will take several years to work out all of the peculiarities in the Town’s accounting and budget system.”

Interview requests were not returned.