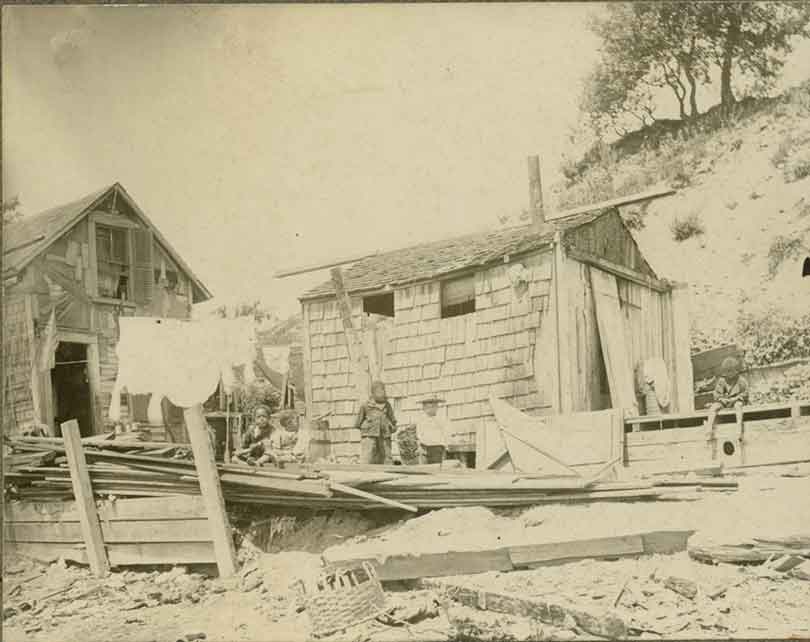 Above: A couple of the shanties of Scalloptown. Photo courtesy of EG Historic Preservation Society

What happened to the waterfront community after attempts at ‘improvement’

Editor’s Note: Recent events both national and local have prompted interest in the history of East Greenwich’s Black community. Nationally, the killing of George Floyd in Minnesota in May touched off protests and a continuing conversation about the legacy of slavery and systemic racism in the United States. Locally, the East Greenwich Historic Preservation Society decided to remove replicas of two prisoners – one White, one Black – that adorned the front of its headquarters, the town’s Old Jail at the base of King Street. The action came both as a result of the national protests but also after consultation with Black historian Charles Roberts of Newport. After they were taken down, East Greenwich News posted an op/ed by local historian (and EG News board member) Alan Clarke that gave some context to the figurines and argued against their hasty removal, but he also provided some history of Blacks in East Greenwich (find that post HERE). It got us here at EG News hungry for more information. Writer Catherine Streich took on the assignment. This is the first of a two-part article by Streich looking deeper at what happened to the Black residents of Scalloptown in East Greenwich.

You’ve probably walked your dog in the namesake park, danced at Finn’s, dined at Blu, chased your kids around the Barbara Tufts Playground, or picked up quahogs at the R.I. Clam Company, but how much do you know about the history of Scalloptown, erstwhile home of East Greenwich’s oft-forgotten African American community?

East Greenwich has had Black residents, both free and enslaved, longer than the U.S. has been a nation. A 1774 state census reveals the town was home to at least 69 African Americans on the eve of the Revolution, who made up 4 percent of the town’s population then, compared to less than 1 percent today. In the 1970 Rhode Island History Journal published by the Rhode Island Historical Society, historian Jeffrey Hess notes that “It was common for colonial New England towns to segregate their free blacks in waterfront areas,” so it is no surprise that a predominantly African American community sprung up on the shores of Greenwich Bay between the old Jail and London Street.

Scalloptown after a storm. Scanned screen image donated by Donald Rice, who bought it on eBay. Small photo, mounted. Appears to be at lower London Street looking north to intersection of Water Street.

Scalloptowners lived in small homes along the waterfront. Most did not own the land on which they resided, nor pay any rent, making them squatters. The abundance of scallops, as well as fish and other shellfish, in the bay meant that residents could easily live off the land – or in this case, the sea. Census records indicate that the population varied from just over 40 residents in some decades, to over 120 in others.

From descriptions in local newspapers, it is clear that many East Greenwich residents held an extremely low opinion of Scalloptown and its residents. Some called it “Rhode Island’s Barbary Coast.” To others, it was “the Black Hole of Calcutta.” Martha McPartland, author of “History of East Greenwich (published in 1960), described Scalloptown as “inhabited by a population of human flotsam and jetsam” noting that “it attracted the lowest possible type of inhabitant.” According to a piece in the 1909 Providence Sunday Journal, an agent from a Rhode Island charity group called Scalloptown the “‘filthiest, most immoral, least civilized settlement in Rhode Island.’” The same piece mentions that social workers coming to East Greenwich from “the Negro slums of Washington (D.C.)” which were “notorious the country over … had never found there anything more depraved than Scalloptown.”

There were many efforts to assist and “civilize” EG’s Black community. One such attempt was by William and Mary Sherman, who, in the mid-1800s, taught poor Black and White children from the Scalloptown area to read in their basement. William Sherman was publisher of the Rhode Island Pendulum. The Shermans eventually purchased land on the “Black Block” on Marlborough Street to build the town’s first integrated church. Besides the congregation’s racial composition, the Marlborough Street Mission Chapel, also called the Union Chapel, was unique in that it did not charge fees, making it truly open to everyone. (The church, now a private residence, stands today at 25 Long Street.)

Later, other members of the local community, particularly women affiliated with St. Luke’s Episcopal Church, decided to step in to address Scalloptown, the “long unresolved thorn in the side of townspeople” (EGHPS Packet, February 1990). A Mrs. Hodgman spearheaded an effort in 1902 to open a mission in the town’s Black community, on Long Street, called St. Luke’s Cottage with the oversight of Reverend Worthington. The St. Luke’s women ran the mission, and they boasted success with numerous baptisms, Sunday School students, and members of the boys’ and girls’ clubs.

In 1908 they decided to reimagine the mission as a settlement house (think Jane Addams’ Hull House), and hired Sarah Fernandis to run it. Fernandis was a Black social reformer from Maryland who, prior to her arrival in East Greenwich, had helped establish the nation’s first Black settlement house in Washington D.C. Fernandis noted the value of having a Black woman lead the settlement house in an interview for the Providence Sunday Journal in 1908. She said that “the work, to accomplish the best results, must be under the immediate direction of colored people. The shiftless negroes need one of their own race as an inspiration to show what colored people can accomplish.”

Upon arrival to East Greenwich, Fernandis made great improvements in the newly renamed and expanded “Neighborhood Cottage.” The historian Hess explains that “in her first year at the Cottage, Mrs. Fernandis started a kindergarten, a day nursery, a stamp savings bank, a reading and game room open four evenings a week, a small circulating library, and classes in sewing, cooking, chair caning, basket weaving, and singing. She also opened the town’s first free clinic, arranged for health lectures, and attempted to find employment for those who desired it.”

Despite various victories, Fernandis faced many difficulties in her quest to reform Scalloptown. When helping Black men find employment, for example, she found that there was very “small demand in East Greenwich for the labor of the Scalloptowners.” After three years, Fernandis reported her frustrations in the Pendulum, saying that “the results are not satisfying, and conditions still prevail that tend to bring about degraded citizenship and a weakened community life.” Shortly after making these comments, she resigned and was later replaced with a White social worker, Miss Mary Evans. This was the beginning of the end for Scalloptown.

Evans lasted less than a year at Neighborhood Cottage, and a suitable replacement was never found. When the St. Luke’s women once again took over the cottage, they decided that the effort was fruitless; not much had changed in Scalloptown after years of missionary and settlement work. Because they saw the depravity and poor living conditions of the community to be the reason for their failures, they decided to break up the community and find them more suitable housing. Children were removed from their families and sent to institutions as far away as Virginia. The St. Luke’s women began to purchase dilapidated houses in the neighborhood and burn them down – the first two were destroyed in 1913. This method was expensive, however, so the St. Luke’s ladies decided to try politics instead and voiced their concerns to the Town Council, who they believed had some jurisdiction over the land:

“No one seems to know who owns the land on which these miserable sheds stand,” says the November 6, 1913, Pendulum. “The facts in the case seem to point to the fact that the town owns the land and can do what it pleases with its own. If this is so, and no one has risen to say that it is not correct, then the way is clear for such a shore cleaning as the town has never witnessed before.”

Realizing the power they had to rid the town of its “festering sore,” the Town Council swiftly launched an investigation, condemned the homes of over a dozen Scalloptown residents, and announced an eviction date. Town Council notes published in the Pendulum in November of 1913 justify the condemnations “by reason of the want of cleanliness” constituting “a cause of nuisance to the public.”

Residents had until April to vacate their homes, and although the crusading St. Luke’s well-meaners had wanted to find suitable housing in town for the displaced residents, they failed to do so quickly enough, and “since new housing was not made available, the evicted Scalloptowners began to drift away from East Greenwich to nearby communities.” Opponents of the evictions challenged the legality of the condemnations, arguing that there were no reports by state health officials, nor were residents given an opportunity to fix the cited issues and keep their homes. This opposition led the council to ultimately rescind its decision, but it was too late: many of the once-evicted residents had already left, although they found themselves unwelcome in neighboring towns like Warwick, which followed in E.G.’s footsteps and “evicted a number of Scalloptowners from the city on the grounds that they constituted a ‘nuisance to the public.’”

Like the first houses that were purchased to be destroyed, the now-abandoned Scalloptown homes were burned down over the next decade, and “it was not until 1926 that the final torch was applied to Scalloptown, reducing it to ashes.” The few surviving members of East Greenwich’s Black community did not have to wait long before they, too, were forced from their homes and their town, this time, by the hands of nature rather than those of local do-gooders and politicians. The Great Hurricane of 1938, which pummeled the New England shoreline, was the final nail in Scalloptown’s coffin.