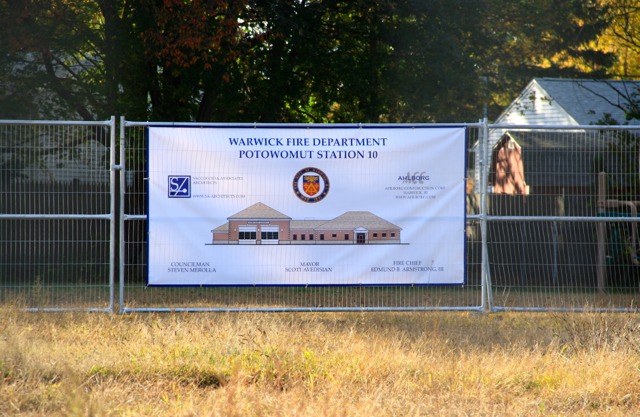 Warwick’s recent groundbreaking for a new fire station in Potowomut means the end is in sight for the $300,000-plus East Greenwich has been getting for many years to cover fire and rescue calls in the area.

EG Fire Chief Russell McGillivray said he was not sure yet how the loss would be dealt with in next year’s budget. The town’s fiscal year starts July 1.

“This is going to be a big hit to revenue, without a doubt,” said Town Manager Tom Coyle.

“For fiscal year 2016 we’ll most probably lose that revenue from the City of Warwick. I’m hoping to get some – some is better than nothing.”

In September, Coyle laid off a member of the Planning Department staff to help pay for the $98,000 EG Fire District senior citizen tax credit that had been overlooked when the district was merged with the town in 2013.

In addition, the town has left one police officer and two firefighter positions vacant in order to save some money.

“I have to be really conservative,” said Coyle about next year’s budget.

According to McGillivray, EGFD does about 200 runs to Potowomut annually. In terms of potential savings that could be found by eliminating those runs, he noted there would be less wear and tear on the trucks.

All that’s left of the old Potowomut Elementary School is a playground behind where the new fire station will sit.

Warwick decided to demolish the school and build a fire station on the site in 2013, but initial bids last summer all came in over $3 million. After paring down the plan, it was put out to bid a second time. Again, bids exceeded $2 million, ranging from $2.3 million to $2.9 million.

But two weeks later, the City Council approved a $2.6 million bid from Ahlborg Construction, using about half of the $800,000 in the budget put aside for city employee bonuses. Additional money was allocated from the city’s disaster recovery fund.

According to Warwick Fire Chief Ed Armstrong, construction will take about a year.