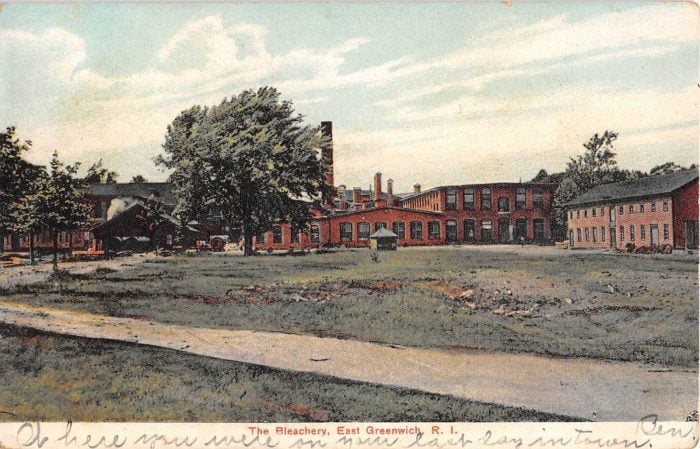 Above: The Bleachery Mill at Cedar Avenue and Post Road. Their 4 p.m. whistle could be heard for miles.

My first recall of East Greenwich as a youth was the many sounds that were very meaningful to the citizens of the town. The first sound was the clutter of the railroad train that ran on two tracks along the shore line. It would sound its whistle at every road crossing. There were four crossings, at Division Street, Queen Street, Long Street and London Street. No need for a whistle for King Street since a beautiful arched bridge was built in 1837. The train made two stops each day at the Duke Street train station. It would take passengers to Providence for 35 cents each way. As a youth, like many of my classmates, I would go down to the track that crossed Division Street and put pennies on the track for the train to flatten. There was a crossing guard stationed there in a small shack-type building whose job was to go to the center of the road with a small round Stop sign. 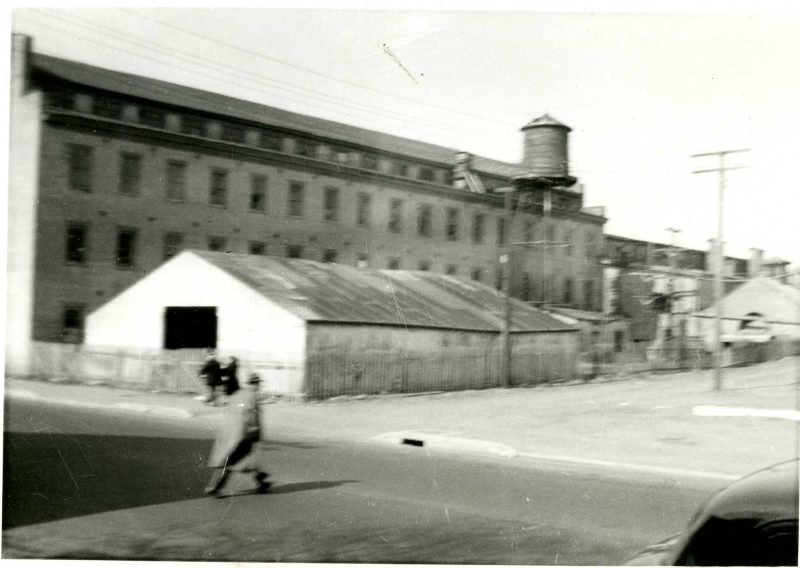 The DrySalters Mill on Main Street at Union Street.

The second sound was made by many of the textile mills located downtown. The clatter of hundreds of looms was deafening and had a distinct sound. I first heard the machine sounds in the summer when the plant windows were open. This was way before air conditioning. I was on my way to swim at the Nock’s Shipyard, later Harris and Parsons. There was a lifeguard and a small raft. The beach was not much to speak of. The mills of East Greenwich were a large part of the employment of the town folks. Many of the workers were recent immigrants and very good workers. Most walked to work each day. Very few people owned an automobile during this time. Fortunately the mills were near by. The Shore Mill was at the foot of King Street, Greenwich Worster Mill was at Duke and Ladd streets, the Bostitch Mill was at Division and Duke streets, the Farrington Mill was at the foot of Division Street. The Drysalters or Union Mill was located at Main and Union streets and had housing for its workers: nine two-story white buildings located on Main and Green streets. The CVS shopping plaza is located where these buildings once stood. During World War II, the Dry Salters produced dye for military uniforms. The Shore Mill was at King and Water streets (and is now condomiums) and lastly the Bleachery, which was at Post Road and Cedar Avenue.

The next distinct sound heard by the town folks was once per hour for 24 hours. It was the town clock located in the 70-foot tower of the Town Hall. The clock was made by Seth Thomas and the bell weighed 1,200 pounds. I remember my neighbor Mr. Miller walking one block from his home each day at around 4 o’clock to wind the clock. He never missed a wind. The clock on the tower had four faces: North, South, East and West. When the clock rang you could hear it all over town.

The fire siren was well known by the town folks but it was used for more than announcing that there was a fire. Before the advent of mass communications it was used on bad weather days to announce that the school would be closed. The siren would sound for about 30 seconds at 8:30 in the morning to the delight of the children that there would be no school.

The last of the sounds was the Bleachery Whistle. It would blast off every day at 4 p.m. It was very loud and could be heard for miles.

Glenn King grew up in East Greenwich and lives in Tennessee. We will be running more of Glenn’s columns in coming weeks.