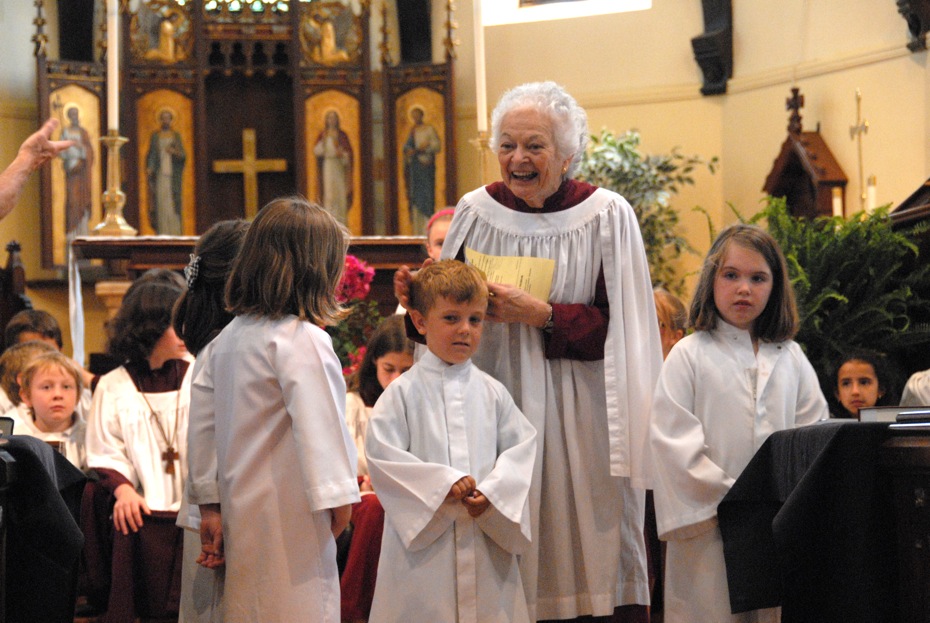 Born in Tunbridge, Vt., she was the daughter of Emma and Russell E. Adams and granddaughter of Nina and John Q. Adams. The family lived briefly in Ascutney, Vt., before settling in East Greenwich, where Priscilla continued to live, study and work for 80 years. She earned her music skills at the Rhode Island Conservatory of Music, New England Conservatory of Music (with Yuko Hayashi), International Organ Institute in Haarlem, Holland, with Anton Heiller, and through a great variety of special workshops and courses. Her first professional church organist position began at age 12 at the Quidnessett Baptist Church in North Kingstown. Next it was Music Director at the Navy Chapel at Quonset Naval Air Station where she played for Protestant, Catholic and Jewish services and directed their choirs of children and adults. Finally, in 1964, she became director of music for the St. Luke’s Episcopal Church where she remained for 50 years, retiring in 2015. Read an article from that time here. 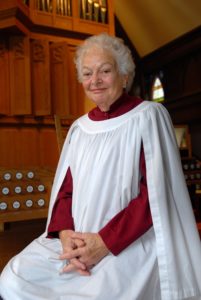 In 2011 she was awarded a Doctor of Music degree honoris causa by the St. ,Dunstan’s School of Sacred Music, for her work in the Episcopal Church in Rhode Island, music ministry at St. Luke’s Episcopal Church and her international involvement in many aspects of her professional career.

Long an advocate for youth choirs, she directed programs for inner city children and made several music mission trips to work with children in St. Vincent, St. Croix, and Grenada in the Caribbean. She was a member of the Royal School of Church Music (RSCM), which is a music achievement program for choristers founded in England and brought to the United States over 100 years ago. In 2010 she established the first RSCM Summer Training Course for children and adults at Salve Regina University in Newport. In five years the course tripled in the number of choristers attending from all over the U.S.

She was responsible for the publication of a new curriculum of Christian education linking music and liturgy that was intended to be used as a companion to the RSCM Voice for Life program with youth choirs. The focus for her entire career was working with children from ages 4 to 18 and incorporating them fully into the musical life of a church.

In 2015 she moved to OceanView in Falmouth, Maine, where she helped to establish and direct a new chorus for residents (featured here). She also helped to inaugurate a new RSCM choir program for children at St. Mary’s Episcopal Church in Falmouth.

She leaves a niece, Rebecca Adams Andreozzi; a nephew, Nicholas Adams Sampson; and goddaughter Priscilla Williams and husband Tom and their families with extended families in Maine, Massachusetts, and Virginia

You may offer your condolences or share your memories at the Jones, Rich and Barnes Funeral Home. Internment will be private at a later date. In lieu of flowers, donations can be made to: