St. Luke’s Pulls Out All Stops As Longtime Music Director Steps Down 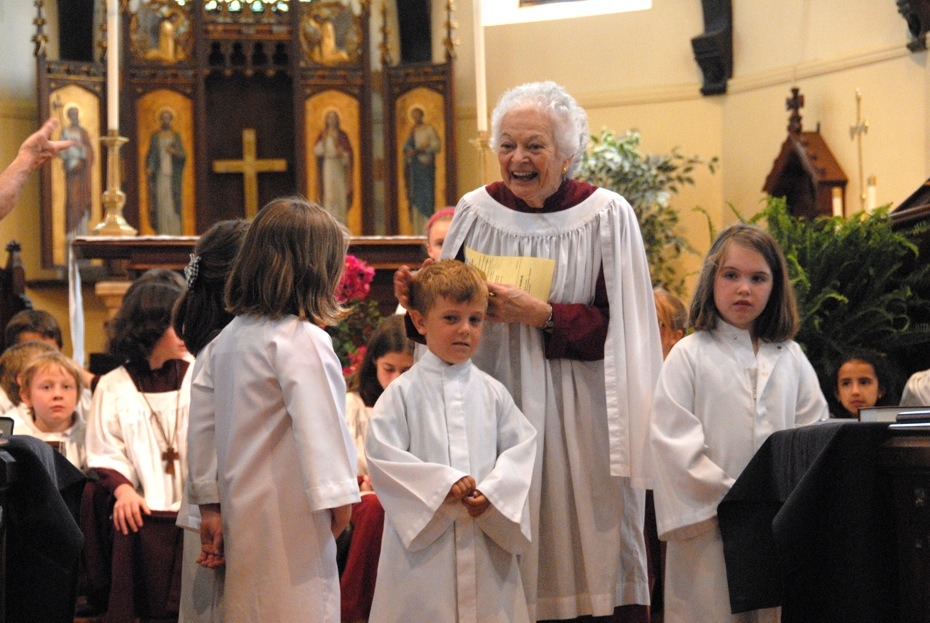 Priscilla Rigg steps down as music director of St. Luke’s Episcopal Church on Sunday, after more than 50 years on the job. And her last weekend is going to be big, including with a tribute concert Friday (Jan. 9), a special service Sunday morning at 10 and culminating with a banquet at Quidnesset Country Club Sunday night.

In the gallery, leading the St. Cecilia and Adult choirs on a Sunday morning.

Rigg, 85, has been playing the organ professionally since she was 12 ⅕ years old. Really.

“It was the begining of the war [WWII] and musicians were being called away,” she recalled. Quidnessett Baptist Church hired Rigg and she worked there until she graduated from EG High School in 1948.

After college, Rigg was music director at the chapel at Quonset Naval Base for 12 years, where she played for Protestant, Catholic and Jewish services. The children’s choir at Quonset was huge – 80 children. They were even invited to perform on the Salty Brine Show.

“I came to St. Luke’s in 1964 because [then-Rector] Al Burns came to my back door and said, ‘I’m looking for a musician and you’ve been recommended.’”

Burns, said Rigg, was very interested in music and she recalled what he told her: “I want you to come and put your shoulder to the wheel and build a program.”

A recent picture of Priscilla with a few of her younger choristers, in the choir gallery.

Build a program she did.

At St. Luke’s today, there are three choirs – the adult choir, the St. Celicia Children’s Choir and the Angel Choir. In addition, Rigg established and directs the Jubilate Ringers, a bell choir made up of ringers from a number of churches. The choirs sing on Sundays, but also perform in special concerts and evensongs throughout the year. In addition, the children’s choir is supplemented with the rigorous Royal School of Church Music program.

“Priscilla has left an imprint not just at St. Luke’s but really on the music culture of all of Rhode Island,” said St. Luke’s rector, Tim Rich. “She has been an innovator, a creator, a teacher. Because of Priscilla there are more children involved in choral performance, there are more individuals playing the organ, there are more people enjoying everything from classical, traditional church music to bell ringing. She’s been tireless, she’s been committed and she’s been visionary.”

A strict musician with very high standards, Rigg has also been able to teach people with no musical background – both children and adults.

Priscilla Rigg, on the left near the children, with choristers in 1982.

“There was never a, ‘You can’t do this.’ It was never, ‘You’re lousy,’” said Geo Borgia, a member of the parish who participated in the music program for 20 years. “I used to think you either had pitch or you didn’t. She’s taught many kids and adults pitch.”

Including Borgia, who first got involved in the music program after his wife joined the then-new bell choir 20 years ago and he starting carrying the bell cases. Before long, Rigg drafted him into the bell choir too.

In the beginning, he said, “I had to write the names of the notes on the sheet music.” When his daughter, Paloma, got old enough to join the Angel Choir (for ages 4 to 7), “that’s when I started to learn to read music. She was teaching the kids the note values and the names. I learned to read music at the same time as my daughter.”

Priscilla Rigg at her place at the organ, with page turner Charlotte Palmer.

“It’s made a huge difference. I have children staying until college now,” said Rigg. “I can’t say enough about the program and I’m grateful for the staff of volunteers.”

“Mrs. Rigg has had a huge effect on my life, because she’s probably the strongest woman I’ve ever met, and I’m sure many other choristers agree,” said 15-year-old Emeline Muoio. “She’s taught me since I was 5 . . . and the amount of music I’ve learned has made me so intrigued by the study of music itself.”

Muoio said it’s hard work, but worth it.

“She’s super strict and holds tight to her methods, and for good reason, because her teaching, playing, and mentoring has been fantastic,” she said.

Rigg speaks very fondly of the adult choir, some of whom have been with her for decades.

“What characterizes them is their spirit,” she said. “They are very caring people, and they are very open. They’re just really good sports.”

Their devotion to her was brought center stage after Rigg fractured her shoulder last summer. She was in the hospital and then rehab for weeks. Once she came home, members helped with visits, meals, and trips to the doctor.

“I was overwhelmed with the attention,” Rigg said.

Rigg with young choristers, circa 2008.

The injury slowed Rigg down but she playing the organ again and continues to work toward full recovery.

“Even through her surgery and rehab, she’s still had a strong hold over the choir, doing whatever she could, which I think is amazing, considering . . . how bad the injury was,” Muoio said.

Rigg will stay on as director of the Jubilate Ringers through June. She’s not quite sure, yet, what the future holds, but she’s thinking about doing some writing about the RSCM program at St. Luke’s and will do some teaching on the organ.

For many at St. Luke’s, her departure will leave a big hole.

“It’s bittersweet. I understand her retirement and I know she needs the rest,” said Borgia. “At the same time, I’ll miss her energy and her passion.”

“This transition will be a whole new experience for us. I think we will weather it well because we have had two rector searches at St. Luke’s and the process is similar,” said longtime adult choir member Carol Stevens. “But because Priscilla is also a friend, it will be difficult to ‘cut the cord.’ We have benefitted enormously from her ministry and we will miss her.”

“After she retires, I still want to pursue choir, and uphold the choir feeling that Mrs. Rigg established over her 50 years here at St. Luke’s,” said Emeline Muoio.

No doubt, that last sentiment, in particular, will be music to Rigg’s ears.

Editor’s Note: Priscilla Rigg was also instrumental in establishing Music on the Hill, a community concert series that attracted top talent for intimate concerts at St. Luke’s for more than 25 years.