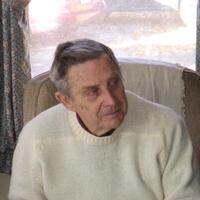 Beloved father, grandfather, and great-grandfather, “Pete” was a high school French teacher throughout his career, teaching both the language and French literature at the Kingswood School in Hartford, CT, Rockland Country Day School in Congers, NY, Princeton Day School in Princeton, NJ, and at the Rocky Hill School in East Greenwich, RI, from which he retired in 1984.

As a young man, Pete spent many summers working on a dairy farm in Vermont. Many years later, he and his wife bought a farm just down the road, then designed and built a house —a summer place which became the family’s “home away from home” for over 30 years. An avid woodworker and builder, he could often be found in his basement workshop, tinkering on some project – often something for the house, sometimes a set design element for one of the many school and local theatre groups he supported over the years. Following retirement, he was an active member of Literacy Volunteers, an English as a Second Language teacher at International House of Rhode Island, and a frequent traveler to France.

After college, Pete served two years in the army before returning from Germany to marry the love of his life, Millicent (née Satterlee) Mali in June of 1953. Pete and Millie lived in East Greenwich, for over 40 years until her sudden passing in September 2020.  Following her death, Pete’s health deteriorated. He passed away quietly in his sleep on July 3, 2021, at the age of 93.  Pete will be laid to rest at St. Luke’s Episcopal Church in East Greenwich, alongside his beloved wife of nearly 70 years.  They will rest in love forever, together. A memorial service commemorating Pete’s life, and the life of his late wife Millie, will be held at St. Luke’s on September 25 for friends and relations.

In lieu of flowers, the family would encourage donations to any of Pete and Millie’s favorite charitable organizations – all of which would be grateful for your support during these challenging times – including The Pottery & Porcelain Club of RI and International House of Rhode Island.