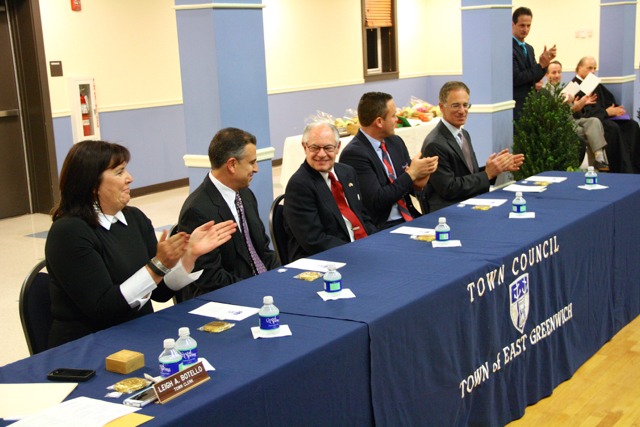 Fellow councilors applaud after the 5-0 vote to return Michael Isaacs, center, to the post of president. Photo credits: EG News

About 200 friends, family, town employees and community members attended the inauguration of the newly elected Town Council, three new and one returning member of the School Committee, and the new town moderator at Swift Community Center Monday night. The Town Council convened briefly to elect leaders for the next two years – Michael Isaacs was voted in as president for the sixth straight term and Sue Cienki got the nod for vice president. Both votes were unanimous.

Color guards from police, fire and the Varnum Continentals started off the proceedings with a flourish of pomp that has become a hallmark of East Greenwich inaugurations, followed by the singing of the National Anthem by T.J. Cienki (son of Sue Cienki). Fr. Tim Rich of St. Luke’s gave the invocation.

The newly sworn in members of the School Committee are:

Also sworn in Monday was Chuck Barton as town moderator.

Before the evening ended, outgoing members of both the Town Council and the School Committee were given gifts of appreciation. Brad Bishop, Jeff Cianciolo, Mark Gee and Michael Kiernan stepped down from the council. Gee won the state Senate Dist. 35 seat; the others chose not to run for reelection. On the school side, David Green, Susan Records and Jack Sommer were thanked for their service. In a short speech, Deidre Gifford praised her colleague Green for his work as chairman of the School Committee for the past two years. Green and Sommer lost their bids for reelection; Records, who served two 4-year terms, did not run for reelection.

The new School Committee did not elect a chair and vice chair Monday night – that will take place Tuesday, Dec. 2, at their regular meeting.

Here are photos from the evening, which closed with a benediction by Fr. Bernard Healey of Our Lady of Mercy.

Chuck Barton, who has served on both the School Committee and the Town Council, is sworn in as Town Moderator.

Michael Isaacs commends Jeff Cianciolo for his four years on the Town Council.

Michael Isaacs thanks Mark Gee for his service. Gee will be sworn in as state senator for Dist. 35 in January.

Michael Isaacs commends Michael Kiernan for his six years on the Town Council.

School Committee vice chair Deidre Gifford thanks outgoing Chairman David Green for all his hard work over his four years on the committee but particularly for the past two as chairman.

Michael Fain, back left, and his wife, Bethany, with their family.

A young audience member enjoys some of the refreshments offered after the ceremony.

Mark Schwager talks to Fire Chief Russ McGillivray. Schwager had served on the East Greenwich Fire District before it was merged with the town in 2013.