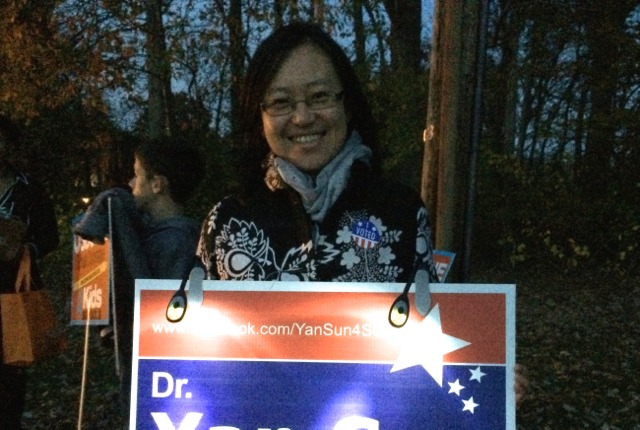 Sun, Osborne and Fain are all members of a group of parents who came together last spring after being frustrated with the current School Committee and have collected around a Facebook group titled “East Greenwich Parents for Excellence.” The parents were motivated, according to Rebecca Bliss, an unofficial leader of the group, by frustration over what she called the current School Committee’s “lack of transparency, responsiveness, and engagement of parents.”

Among the issues they wanted the School Committee to address were later school start times at the middle and high schools and the addition of all-day kindergarten – both of which are now being explored by ad hoc committees. In addition, they have questioned the School Committee’s strategic planning process.

Sun, the top vote-getter, made a point of telling voters in public forums she would respond “to every phone call and every email.”

“The message resonated with a lot of voters,” said Fain after the votes were counted, “particularly people with school-age kids. I think it went without saying they were looking for some changes.”

Green and Sommer were elected to the School Committee in 2010, with Green taking over as chair in 2012. Newcomer Christen Meyer (R) was the third candidate that fell short in the vote totals.