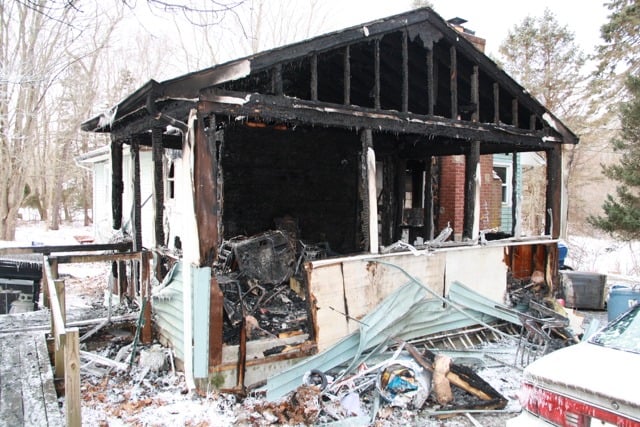 The scene at 1796 Middle Road the morning after a fire there caused significant damage.

The fire that displaced two people and caused significant damage to a house at 1796 Middle Road Saturday night started on the outside porch in the area of the washer and dryer, said EG Fire Marshal Steven Hughes Wednesday.

“We call it ‘undetermined,’” said Hughes, since without running extensive – and expensive – tests there’s no way to know exactly what caused the fire. A report that it was caused by a space heater is unconfirmed, he said. According to one of the residents, there was a space heater on the porch but Hughes said it’s not known if it was in use at the time of the fire.

While the exact cause had not been identified, it was not a suspicious fire, he said.

Fire damage was largely confined to the outdoor porch, but there was extensive heat and smoke damage throughout the one-story house.

“The guys made a great stop,” said Hughes. “They stopped the fire before it got into the area above the ceiling so the house was not a complete fire loss.”

Hughes did urge residents to take some basic safety precautions when it comes to dryers, like cleaning out the lint tray regularly. He said he cleans his dryer twice a year to get rid of any lint that may have escaped the lint collection tray.

“Lint is made up of parts of fabric, which can be flammable,” said Hughes. “It’s like a cotton ball, it would readily ignite if exposed to flame.”