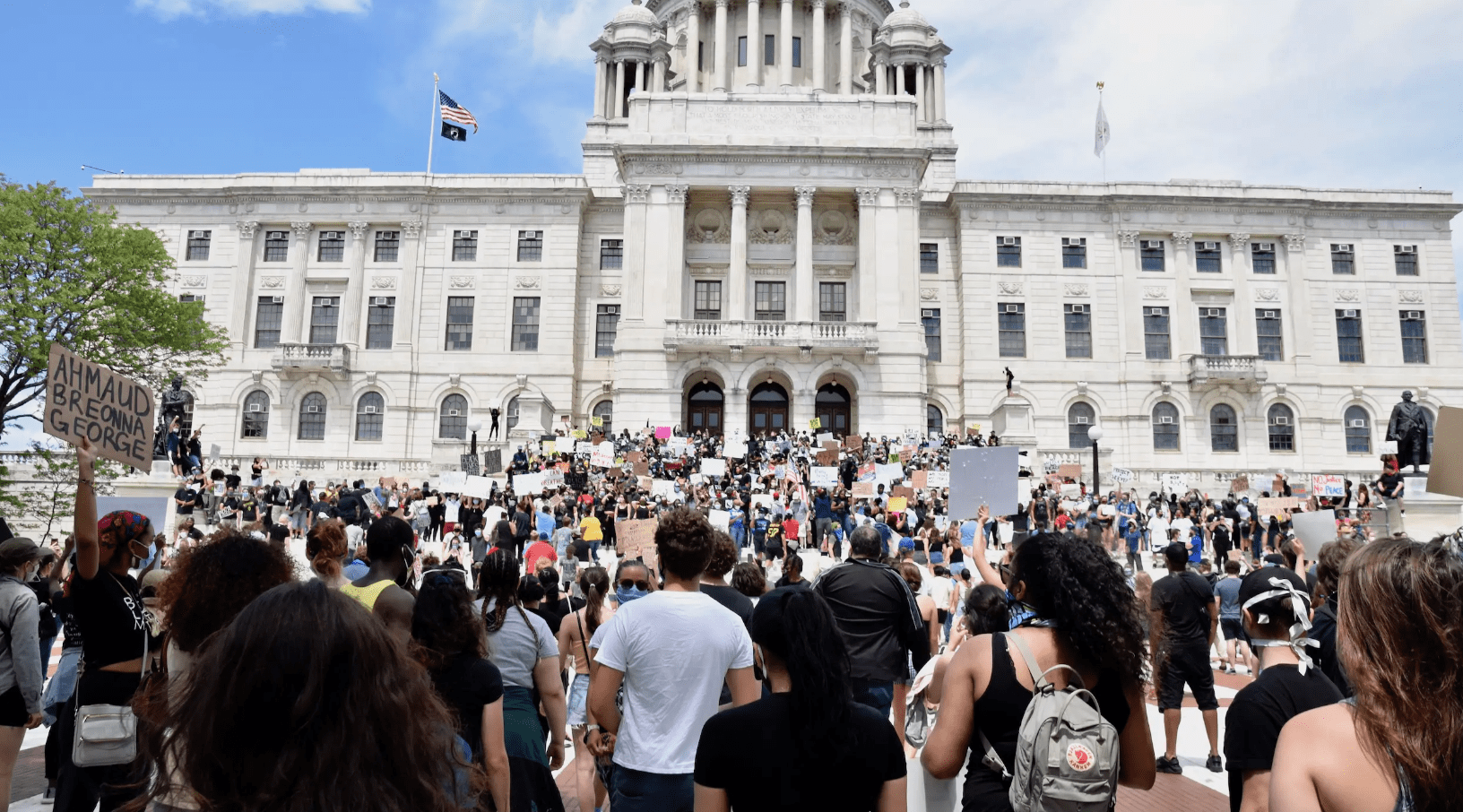 Above: A protest over the killing of George Floyd at the State House in Providence May 30. Credit: Uprise RI

The protests and violence that has risen across the country in the wake of the videotaped death of George Floyd under the knee of a police officer in Minneapolis on Memorial Day seem a long way from East Greenwich. But EG News checked in with a few people in town and learned the issue of racism and how the U.S. deals with race is heavy on people’s minds.

Police Chief Steven Brown said Sunday he didn’t anticipate East Greenwich would be a flashpoint of contention, but added, “As far as the [George Floyd] incident goes, yeah, it’s totally wrong. The officers have to be held accountable. All of them.”

Police were initially called to the scene in Minneapolis because of a suspected passed counterfeit bill. Brown acknowledged he did not know the whole story but he was able to give context to how such a call might be treated in East Greenwich.

“When we deal with counterfeiting, we normally don’t take them into custody. It’s a federal offense. The Secret Service handles that,” he said. “It’s a very minor crime.” He said they typically send whatever information they have to the Secret Service without pursuing an arrest.

With regard to Derek Chavin, the Minneapolis police officer charged with Floyd’s killing, Brown said he didn’t think it was a case of an officer losing his temper so much as an officer feeling the need to exert his control. “I don’t see the cop out of control. I just see the cop being stupid, trying to assert his control,” he said.

How often do the police in East Greenwich get called because of a “suspicious person” who happens to be black? A lot, said Brown.

“There’s a black guy walking down Main Street and a caller might say, ‘He’s acting suspicious.’ We tell our guys, ‘Do a drive-by first and if they’re just walking down the road, you keep going.’ Nine times out of ten, it’s nothing,” Brown said.

That’s a change from the practice 15, 20 years ago, he said. In those days, a police officer might stop the person and demand their ID. Nowadays, officers only ask for ID if they have “articulable suspicion,” Brown said.

“It’s really sad,” said Town Councilor Renu Englehart of Floyd’s death and the subsequent unrest. Englehart, who is of South Asian descent (her parents were from India), has spent most of her life as a New Englander and she’s used to be one of the rare brown people at a function, a school event, a government meeting.

“You’re always consciously aware that you’re maybe the only brown person in the entire room,” she said. “I’ve never felt discrimination but people will make comments about black people or hispanic people and you’re kind of caught in this place … your skin color is one thing you can’t change.”

Englehart said there are times when someone says something cringe worthy and she would “wish you had another person to commiserate and say, ‘Can you believe that person just said that?’”

“People are well meaning but they say things without realizing how it feels,” she said, adding, “I would like to see more diversity in East Greenwich.”

“We’re part of the same machinery that’s been unable to respond to this for the last 50 years,” he said. He said he recently watched an interview by Mike Wallace of 60 Minutes of Martin Luther King Jr. from 1966.

“It sounded like something that could have been done today,” Schwager said. “The climate is one that has promoted divisiveness. We’ve got a lot of ground to make up.”

What role can East Greenwich play? Schwager said he thought it began with housing.

“Issues of housing are very important to increase diversity and we’ve been working hard to meet our affordable housing goal,” he said of town government, particularly the Planning Department, through inclusionary zoning laws. By state law, communities are supposed to have 10 percent of their housing stock deemed affordable; EG right now has below 5 percent but there are developments on the books that would raise that to close to 7 percent.

“I do feel a sense of urgency. What’s happening in this country is tragic. It’s not new but it’s a new moment in time…. I think the local conversations are really, really important.”

Mark said the school district’s recent adoption of graduate standards – the “Portrait of a Graduate” – does some important work in this regard (read about that HERE).

“It’s about knowledge and competency but it’s also about connectedness and reflectiveness,” she said of the portrait. “It’s about being able to engage in conversation and be in relationship with people who are really different from you.”

People in East Greenwich may not see this is an issue that involves them. Mark disagrees.

“For so many people, they think the work is external, it’s over there… but so much of the work is internal because we all harbor bias.”

Pastor Linda Forsberg of the First Evangelical Lutheran Church in East Greenwich said she’d already recorded her sermon last Wednesday, after the killing of George Floyd but before the real unrest had begun.

Because it was for Pentecost – the arrival of the Holy Spirit in Christian religion – Forsberg, who also serves as pastor for Church Beyond the Walls at Burnside Park in Providence – said it was about the Holy Spirit as a violent wind. While she didn’t know what the next few nights would bring, somehow her sermon anticipated the tumult.

“Sometimes we need this strong wind to wipe things away so we can have a new beginning,” she preached. “We really need to wipe racism away.”

EG News wants to continue this conversation. If you would like to add your thoughts, let us know. We really want to hear from you. Send an email to [email protected]