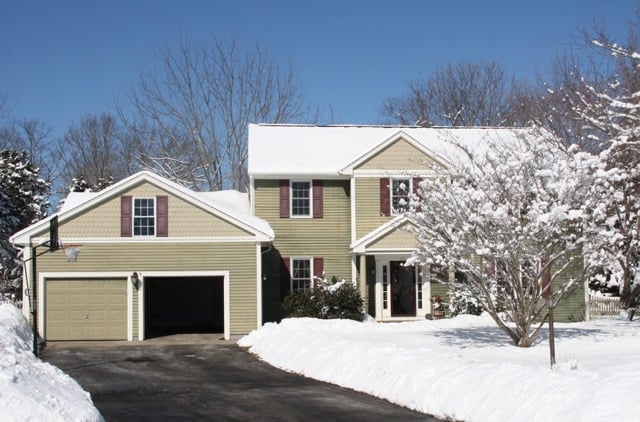 The homeowners who filed suit against the town, school department and others over damage they say was caused by construction of the new Cole Middle School, took centerstage at the jury trial before Superior Court Bennett Gallo this week.

“I was getting ready for work one morning and I was in the shower,” said Tom Hogan of 40 Sarah’s Trace on the stand Tuesday. “I felt this startling vibration. I thought I was going to have to run out of the house real quick…. I’ve never been in an earthquake, but that’s what I thought it was.”

That was the first time Hogan said he felt shaking in his house, in late November 2009. Hogan’s house abuts the Cole Middle School property. Construction on the new school, which was built next to the old school, began that same month.

According to Hogan, it was his partner, Cynthia Pelosi, who first noticed a crack they thought was caused by the construction vibrations, in the kitchen.

“It was quite obvious, a good-size crack that looked like it just happened,” he testified.

As the months went on, he said, they noticed cracks and gaps throughout their house and garage in walls, ceilings, cabinets and counters.

Hogan and Pelosi teamed up with next-door neighbors Chris and Susan Lamendola (at 50 Sarah’s Trace) – hiring the same lawyer and taking many of the same steps, including hiring the engineering firm Exponent to do additional property surveys (after two had been done by engineers hired by the town). Chris Lamendola testified on Monday and Susan testified Tuesday.

“He didn’t advise you to move out?” asked John Donovan, lawyer for construction company Manafort Bros., about the Pare engineer.

Pelosi also took the stand this week. She, too, recounted the initial vibration instances.

“How has this experience affected you?” said Maglio.

“I just feel these cracks were happening before my eyes and I couldn’t do anything to stop it,” Pelosi said.

Keith Amelotte, who lives at 35 Sarah’s Trace with his wife, Wendy, and their two children, testified they started experiencing problems he linked to the school construction in April 2010.

Amelotte said his garage, house and pool had been damaged, noting cracks in some places and unlevel flooring in others.

In cross examination, Manafort lawyer Donovan asked about the conditions of the house and property before 2009. He cited a sink hole near the pool and problems with the asphalt driveway, in particular, that were noted in the inspection before the Amelottes bought the house.

Donovan also asked Amelotte if he and his wife had been able to refinance their house recently.

Yes, Amelotte said, they had.

Testimony continues Thursday at Kent County Courthouse. You can find an archive of EG News stories about the homeowner lawsuit here.