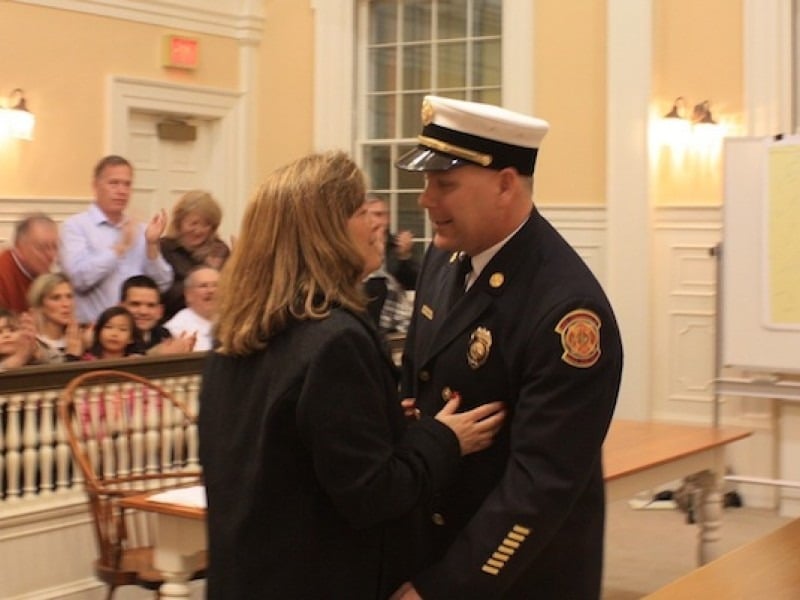 Kristen Henrikson congratulates her husband Peter after he was named chief in 2010.

Town Manager Gayle Corrigan has chosen fire clerk Kristen Henrikson as her new confidential assistant, replacing Michaela Antunes, who served as chief of staff until her departure in April.

It’s a remarkable turn in fortunes for Henrikson, who unsuccessfully fought the fire district, then the fire department (the town took over the fire district in 2013), in court for years over what she said was discrimination for not letting her move from her fire clerk’s position to that of firefighter. Starting in 2009, Henrikson had argued that as an existing employee, she was eligible to switch positions without taking tests including a physical performance assessment test, a swim test and a ladder test.

Henrikson lost before the state Commission for Human Rights, then sued the town in both state court (where her case was rejected) and federal court (where it was dismissed).

Henrikson went out on IOD (injured on duty) status in 2014. The town negotiated a settlement with her in 2016 in which she agreed to retire from the fire clerk job with a settlement payment of approximately $73,000.

Corrigan offered Henrikson her old fire clerk job in August 2017. Since then, Corrigan has increasingly relied on Henrikson, who has served as liaison for the ad hoc town manager search committee.  Now, as Corrigan’s assistant, Henrikson will have a central job in town government.

The Town Council is asked to approve the new pay scale at its meeting Monday at 7 p.m.. The Personnel Board is meeting at 6 p.m. to weigh in on eliminating the chief of staff position, replacing it with the confidential assistant position, as well as to approve a new pay scale for that position and three others (Standard Pay Scale 5-7-18 ).

The chief of staff position was short-lived.

Less than two weeks after she was hired as interim town manager, Corrigan laid off assistant to the town manager Pam Aveyard on June 30 (along with two other employees) and named Michaela Antunes chief of staff, paying her $72,500 – Aveyard was earning $53,354 at the time of her dismissal. (Aveyard is suing the town for wrongful termination.)

Antunes could not be reached for comment about her departure.

Meanwhile, Kristen’s husband, former Fire Chief Peter Henrikson has also seen his currency rise during the Corrigan era, serving as an unofficial advisor to Corrigan on all things fire department. Corrigan praised Peter Henrikson’s stewardship of the fire department in her analysis of the town’s takeover of the fire district (which she considers was ill-advised). Henrikson has also been involved in vetting interim fire chiefs.

The fire district became a town department in June; the firefighters union voted 36 to 1 no confidence in Henrikson the end of July (with Kristen the lone vote of support); and Henrikson retired in September. He had been out on medical leave since June.

“Given the acquisition of the Fire District and changes that that will bring, and also important changes in the benefits that will result from that, Fire Chief Henrikson expressed a desire to retire,” then Town Council President Michael Isaacs said at the time in an article on East Greenwich Patch.

Peter Henrikson may see his status change as well. Several people have said they expect Corrigan to offer Henrikson the post of deputy chief – she has said she will present a candidate to fill that position on an interim basis at the Town Council meeting May 14.

Sue Cienki pointedly told Corrigan during the Town Council meeting April 9 to choose a deputy chief from Rhode Island. The two interim fire chiefs have been from Massachusetts. Cienki said in August she would never want Peter Henrikson back in the fire department; in February, she said she had never met Peter Henrikson.