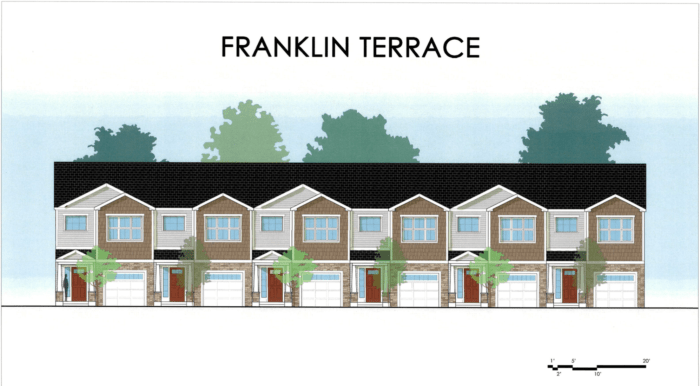 The Planning Board unanimously approved the initial master plan for a condominium project at 25 Franklin Rd., but asked that the developer address flooding and traffic concerns prior to the next hearing. 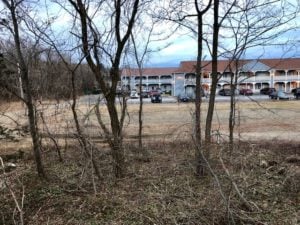 A view from Franklin Road of the proposed condominiums.

The project proposed by John Holmander of Pilot Properties includes 12 new two bedroom units split between two buildings. Three of the units would meet the state’s definition of affordable housing. Holmander previously wanted to build a microbrewery on the land, but after community pushback, that project was cancelled.

During the June 16 hearing, Holmander and others working on the project presented the board with numerous materials such as construction blueprints, photos of flooding and a parking study (Holmander Pre-Application and Plans).

One of the greatest concerns from abutters during the preliminary hearing was that the project would increase flooding that comes from a River Farm drainage swale. Holmander said that flooding was a concern long before he bought the land and that he did not believe the project would intensify it.

“The photos show our property neither contributes to nor is affected by the flooding.” Holmander said. “As the water flows from the drainage swale towards Post Road, it’s contained in or on the town road, and there’s pictures that are included that show that the width of the flooding was about 20 feet wide on a road it’s 36 feet wide…But the resolution to this problem will only come by addressing the root cause, which is yard debris from the River Farm area.”

Steve Cadorette, an environmental engineer on the project, described a conceptual storm water drainage plan for the project that would involve creating a grass swale running along the base of an embankment in the northwest corner of the property. He said the area would be grated so surface runoff would flow to the grass swale. Additionally, the northern property line would have a sand filtration area and detention basin. Landscape architect Ashley Cullion later said that the proposed landscaping and vegetation included in the project would function with the buffering.

Engineer Joseph Giordano presented the board with a traffic study analyzing current traffic patterns in the project’s proposed area, as well as a forecast on how the project would impact traffic.

“My findings and conclusions [are] that from a traffic operational perspective there will literally be imperceptible traffic impacts to the surrounding streets system from this particular proposed development,” Giordano said. “And from a safety perspective, we have all the adequate sight distance that we need for traffic to operate safely, both in and out of the project, and in and out of Franklin Road at Post Road.”

During the public comment portion of the meeting, multiple people said they worried the project could still increase flooding despite mitigation efforts.

“My eighth grader will tell you that if you make the surface impervious, you will have to drain somewhere, and the slope drains all the way onto Franklin,” nearby resident Ritesh Rathore said. “It doesn’t go on to Post Road, it doesn’t go towards the sand mitigation system that seems to be pretty fancy, but again, part of the drainage does go because of the elevation on to Franklin, no clear way around it.”

Thomas “Tex” Blankenship said he hasn’t seen support for the idea that “the flooding is due to the neighborhood’s inability to keep stuff out of the drainage.” Beth Hopkins added that she believed the flooding did not come from debris but instead from the Tanglewood Drive area.

Blankenship said he thought the project would lead to increased street parking that would congest the roadway or cause backups, particularly turning onto Franklin Road from Post Road. Holmander said that he does not think this would be a problem tied solely to the proposed project.

Although the board acknowledged these concerns, they unanimously voted to approve the master plan because, according to Planning Board Director Lisa Bourbonnais, certain factors can not be used in decision making until a later date per state law for comprehensive permits.

Getting master plan approval is just the first step in a three-step process before any construction can begin. Next up is getting “preliminary plan” approval, the developer must provide more substantial information, including complete engineering. But environmental impacts are not assessed until the third step, final approval.

“In a normal planning board process, if we were reviewing your ordinary land development or subdivision, we would be able to make findings about environmental impacts, at the Master Plan stage,” Bourbonnais said. “And those would be compelling grounds to reject an application. The comp[rehensive] permit process as designed by state law takes that privilege away from the town. We are not allowed to assess negative environmental impacts, until the final stage of review, and that’s probably a hard pill to swallow.” 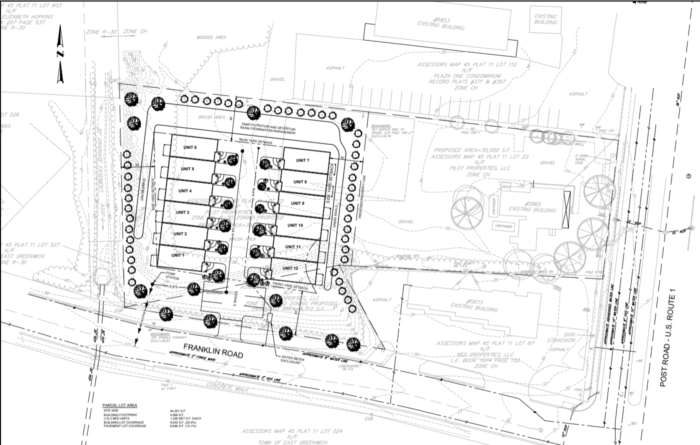