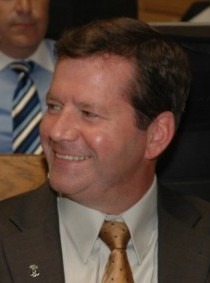 Bob Watson when he was still serving as a state representative.

The arrest comes after a string of arrests, beginning with a well publicized DUI in Connecticut in 2011. Although prosecutors never took Watson to court on that charge, the arrest did cost him his House minority leader role.

When police arrived, the homeowner and her grandsons were outside and Watson was inside. Because he was bleeding and did not respond to police questions, EGFD rescue was called. According to the police report, Watson became argumentative with rescue personnel so a police officer rode with Watson to Kent Hospital. After he was treated and released, police took him to the ACI because of a parole violation.

Watson sought treatment for drug and alcohol problems after he was arrested in 2012 for possessing marijuana. He did not run for reelection in 2012, after serving 20 years as a state representative (and two years, from 1988 to 1990, as a state senator). He was the only state representative in 2010 to vote against the state’s now-infamous $75 million loan to 38 Studios, a video game startup owned by former Red Sox star pitcher Curt Schilling that went bankrupt in 2012.

With reporting assistance from Bethany Hashway.