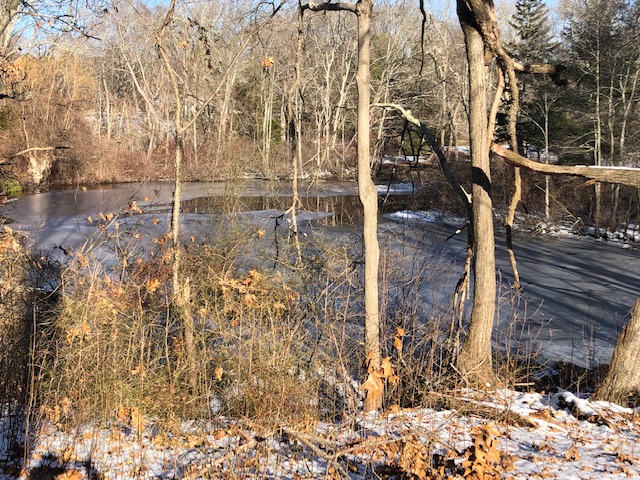 A veteran firefighter was bit in the face Sunday while rescuing a dog from the water at upper Bleachery Pond between Cedar and First Avenues.

The dog, belonging to a resident of Brisas Circle, fell through the ice and someone called 911. Before police and fire had arrived, however, the dog’s owner tried to rescue the dog and he fell into the frigid water too.

Police were first on the scene and they threw a rope to the man, who grabbed it and was pulled toward shore, where he could get out.

Wearing a cold water exposure suit, an EG firefighter, ventured into the water after the dog. The firefighter reached the dog, grabbed him and started towards shore, trying all the while to calm the animal. But the veteran firefighter was in water up to his neck, face to face with the frightened animal. The dog first bit the man in the lip. The firefighter kept hold of the dog and continued into shore. But the dog then bit the firefighter again, this time a much bigger bit into his lip and cheek.

Patenaude said, “If your pet goes into the water, call for help. If the ice can’t hold the pet, it can’t hold you. That’s the basic thing.”

He also said he’s ordered snare sticks for the department for future such rescues. The snare stick allows a firefighter to control an animal away from their body.

Coincidentally, Sunday was the second anniversary of another dog rescue, this one on Greenwich Cove. You can read about that here.