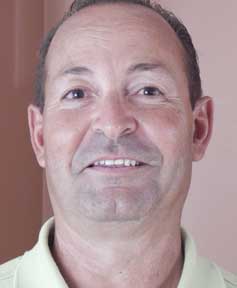 The charge of cyber harassment against former student resource police officer Humberto Montalban (aka Officer Bert) was dismissed in Superior Court Tuesday. Montalban was arrested by state police in July after a former girlfriend accused him of sending harassing texts.

Police Chief Stephen Brown said Montalban would be back on patrol duty Sunday. Montalban had been suspended with pay since his arrest, as dictated by the Law Enforcement Officers Bill of Rights.

“He wants to get back to work,” said Montalban’s attorney, Charles Calenda. He accused the prosecution as being “overzealous.”

“The state police charged this case on what I believe was very weak evidence,” Calenda said. “I had taken the position that there was no crime committed, that the allegations were not a crime as a matter of law.”

As to whether or not Montalban regretted his behavior, Calenda said, “If you were to ask the parties involved, would they behave the same way in the future, they’d probably both say they wouldn’t. Whether that rises to the level of a crime, we strongly disagree with.”

Calenda said the AG’s office tried to “extort a plea” from Montalban. “It amounted to a level of extortion that in my view was completely unnecessary.”

Montalban was accused of sending a number of texts over three days in June to an ex-girlfriend that she said were designed to cause her emotional distress, including a photo of a man and a woman having sex in the woman’s bedroom and a text that included her parents’ phone number.

Montalban, 58, was given a civil order to stay away from the woman for one year. Calenda likened the order, which is not criminal in nature, to one that might be ordered to feuding neighbors.