Council to Vote Monday on Corrigan as Permanent Town Manager 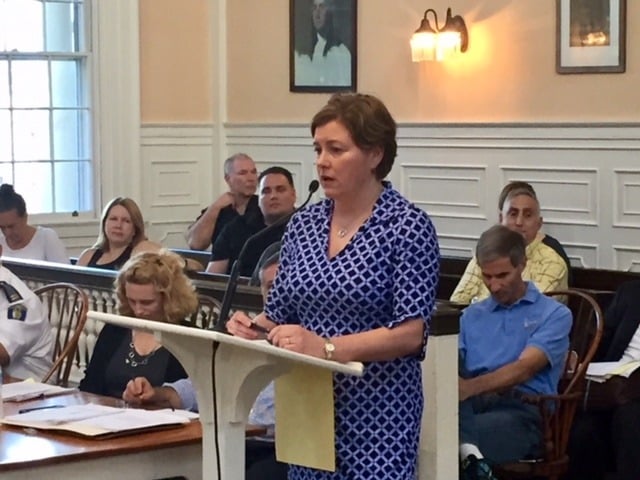 Gayle Corrigan, a lightning rod for criticism since her initial hiring one year ago, is the Town Council’s choice for permanent town manager. On the agenda for their meeting Monday, June 25, under “New Business,” is Corrigan’s appointment as town manager.

This is the culmination of the search for a permanent town manager that began in earnest last November, when the post was advertised. In total, the search yielded more than 60 applicants. The council winnowed that number down to 12 resumes that they passed on to a 6-member search advisory committee appointed in January. That panel interviewed 5 of those 12 applicants. The Town Council interviewed at least two applicants. Search coordinator Councilman Nino Granatiero declined to say how many. He also declined to identify the candidates as well as whether or not Corrigan had applied. 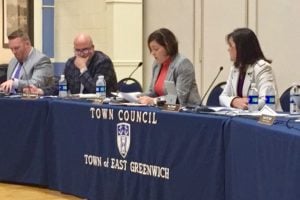 It became increasingly clear in recent months that Corrigan was the likely candidate, given the Town Council’s willingness to approve her proposals, including her unrelenting hard line against the firefighters;  merging the parks and rec and senior and human services departments; and an “all or nothing” approach to consolidation with the school department. Meanwhile, the majority of those who attend Town Council meetings have spoken out against Corrigan.

“The Town Council has said that a vote on the Town Manager will take place on June 25.  I hope that Gayle Corrigan will not be selected as Town Manager. There is now an opportunity to move forward past the polarization and divisiveness. The animosity that exists makes reasonable discussion and finding common ground on important issues very difficult.  This has hurt our community and our reputation in the state. Important fiscal issues need to be addressed but the way in which this is being pursued has become counterproductive. We need to continue to pursue cost efficiencies and consolidation and this can best be achieved with less acrimony and a new approach.”

The meeting includes an agenda item calling for appoint of Wendy Schmidle, the town’s IT director, as acting town manager for July 14-26, presumably a period when Corrigan plans to be away.

It is scheduled to be held in Council Chambers at Town Hall, even though the last time the council appointed Corrigan more than 500 people attended. That was after the original meeting – at Swift Community Center – had to be adjourned because so many people were unable to get in. Swift holds 253 people. The meeting was moved to the auditorium at the high school, which holds 700. Council Chambers holds fewer than 200 people.

A section at the bottom of the agenda mentions “in the event of an overflow crowd,” but there appear to be words missing after that phrase. It reads:

… In the event of an overflow crowd, Individuals requesting services for the hearing impaired must notify the Town Clerk’s office …

When questioned, Town Council President Sue Cienki said via email the meeting would be moved to Swift if there was an overflow crowd. She said it was left out by mistake.

Support local news – donate to East Greenwich News! Click on the Donate button below. We can’t do it without your help!