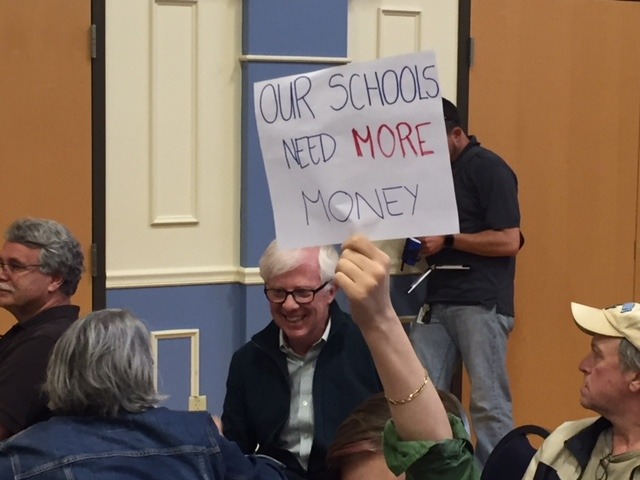 The council also approved, again in a 3-2 vote, implementation of a three-platoon, 56-hour work week for firefighters, effective June 3, unless Town Manager Gayle Corrigan decides to advance or delay the implementation. This time, the no votes were councilors Mark Schwager and Andy Deutsch.

The vote was taken without the benefit of a fiscal analysis of such a reorganization, which both councilors said they wanted.

The Monday night meeting started with a joint budget hearing with the School Committee that lasted until 11:30 p.m. and offered competing narratives. On the town side, Corrigan and members of the Town Council said they wanted to spend money on schools but harsh budget realities got in the way. Corrigan presented a 2.0 version of the budget she posted May 1 – including more information and revised revenue and expense lines throughout.

On the schools side, committee members – and several speakers during public comment – said Corrigan’s budget threatened not just the town’s reputation as a good for schools but also its very accreditation.

The reality is that Corrigan’s budget gives the schools $149,000 in additional revenue next year; the School Committee asked for $1.3 million in additional funds (for a total $39.1 million budget).

Among the highlights from Corrigan’s presentation: firefighter overtime put at $1.2 million (up more than $400,000 over current year, but without a complete explanation how that estimate was calculated); a $1.7 million settlement for a court judgment against the town dating back to actions by the former EG Fire District from 2003 to 2013; and increased pension payments.

Corrigan and Council President Cienki both said they might support shifts in the budget to give the schools additional money – in particular, moving a $350,000 payment for retiree benefits payment (OPEB) to the schools side).

But Councilman Nino Granatiero said  small fixes were not going to solve the real problems. Instead, he said, the town needed to look at privatizing, or merging services like fire with other communities.

Before the vote was taken on Peter Henrikson, firefighter union president Bill Perry warned the council against approving him. Interim Fire Chief Kevin Robinson said there were two applicants for the job, which was not posted. Robinson also said he hadn’t heard negative comments about Henrikson until Perry’s comments at the meeting.

Schwager said his vote against Henrikson was because of the deep animosity felt by the rank and file against him. Cienki joined Schwager in voting no because, she said after the meeting, she wanted to be consistent. Last August, she said she would not support Henrikson’s return.

Schwager and Deutsch, who both voted “no’ on the three-platoon, 56-hour work week, said they needed a financial analysis of the change before they could consider supporting it.

This was the first of two budget hearings.