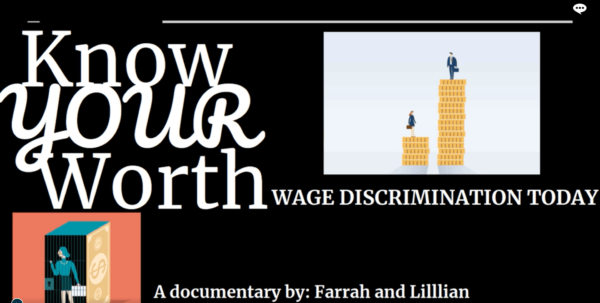 Four E.G. middle-school students – in two groups of two – entered a national documentary competition last September. Since this was their first year competing, the students didn’t really expect to win any awards. To their surprise, both groups were declared prize winners in mid-March.

The competition, called StudentCam, is hosted by C-SPAN and held annually for students in grades 6-12. This year’s prompt asked students to “explore the issue [they] most want the president and new Congress to address in 2021.”

Farrah and Dessa Molina Martins’ mom was searching online for competitions for her kids to take part in when she came across StudentCam.

“My mom is always looking for projects and opportunities for me and my sister to do,” said Farrah Molina Martins. “So once she heard about it, she told us about it.”

“We originally started with the topic of women’s rights,” said Ranney. “And we clearly realized that that was too broad of a topic…. So we kind of narrowed it down to sexism in the workplace. And then from there, we settled on the wage gap.”

In their video, Ranney and Farrah Molina Martins used clips from interviews they had conducted with R.I. politicians such as Rep. Justine Caldwell (Dist. 30), Sen. Gayle Goldin (Dist. 3) and Sen. Bridget Valverde (Dist. 35).

The video also included some history and statistics relating to the gender pay gap.

“We got a bit of our information [from interviews],” added Ranney. “And then we also looked on the internet. Census.gov was a really good page for all of that.”

Both Molina Martins and Ranney are proud of the work they did on the video, and for winning third prize.

“Since it’s our first time, “ said Molina Martins, “I knew it’s ok even if we didn’t win. “But once we found out we won third place, it was nice because we worked really hard. And I was proud of us because we did it all ourselves, and it was our first time doing video editing and stuff.”

“Farrah and I did this pretty much completely by ourselves,” said Ranney. “So we were pretty self-motivated. And we were just super excited to win because it was something that we had never tried before…. Research projects like this aren’t really things that we do in elementary school.”

The two agree that their participation in the competition has provided them with useful skills for the future.

“I gained a lot of knowledge when it comes to filmmaking, interviewing, and research,” said Molina Martins. “I think it’ll be valuable to continue the competition in future years.”

As third-prize winners, each sixth-grader will receive a cash prize of $750, as well as $125 for their school, Cole Middle School.

You can find Molina Martins and Ranney’s video HERE.

“Dessa and I decided early on,” said Rarick, “that we wanted our topic to be about teen mental health in the U.S. Our video is about some of the most prominent issues with our current systems and what happened under the last administration – just what we think should happen regarding teen mental health going forward.”

For their documentary, Rarick and Dessa Molina Martins set up interviews with representatives of NAMI, the National Alliance on Mental Illness. The two also spoke to R.I. Sen. Alana DiMario (Dist. 36), who works as a licensed therapist in North Kingstown.

“We reached out to people who had a lot of experience in the topic [of mental health],” said Molina Martins. “It was really interesting to hear from these different people and how passionate about the topic they were.”

Their video focused on social media, diversity, and disparities in mental health.

Both eighth graders hope to do more projects and advocacy relating to mental health in the future.

“I think it’s an important issue that should be talked about,” said Rarick.

“When it comes to teen mental health,” said Molina Martins, “I think it’s a topic that I want to continue discussing and working towards destigmatizing it in our society.”

Their honorable mention comes with an award of $250 for each student.

You can find Molina Martins and Rarick’s video HERE.