2 Coyotes, 1 Deer & A Rescue, Of Sorts, on Greenwich Cove 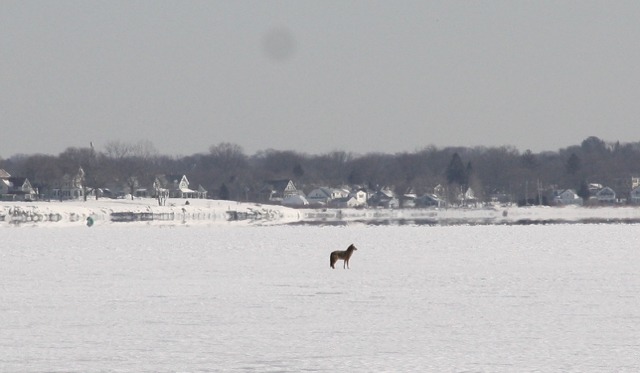 One of the two coyotes ran to the middle of Greenwich Cove after Warwick FD scared them away from the deer they had chased onto the ice .

To Joe Thornton and Geoff Blake of Norton’s Marina, it looked like maybe a person walking on the ice had fallen into the water with two dogs standing nearby Tuesday morning before 9. With air temperatures in the single digits, and water temperature just above freezing, they called 911.

A closer look revealed it wasn’t a person and dogs at all. Rather, it was a deer that had been chased onto the ice by two coyotes intent on a meal. The deer had fallen through the ice and was in the water with one of the coyotes starting to attack and the second coyote lying several feet away.

Warwick Fire arrived and a team suited up in red cold-water rescue suits took out over the ice toward Goddard Park.

“When we got close enough to scare off the coyotes, the deer got out by itself. The water’s not very deep there. The deer took off into the woods,” said Battalion Chief Miles Steere.

“We got the call as a dog rescue,” he added. “What we worry about with a dog, people tend to go out and try to save dogs and go in themselves. A dog rescue can become very dangerous very quickly.”

A photo taken by Geoff Blake at Norton’s of the coyotes on the ice with the deer in the water to the left, before Warwick FD arrived.

The coyotes continued to roam the ice on Greenwich Bay while the firefighters were on the ice, keeping their distance, but not going away. One kept circling closer to Goddard Park side, as if weighing another hunt for the deer.

“We just gave the deer an extra few minutes,” said one of the men in red as they returned to the Norton’s dock.