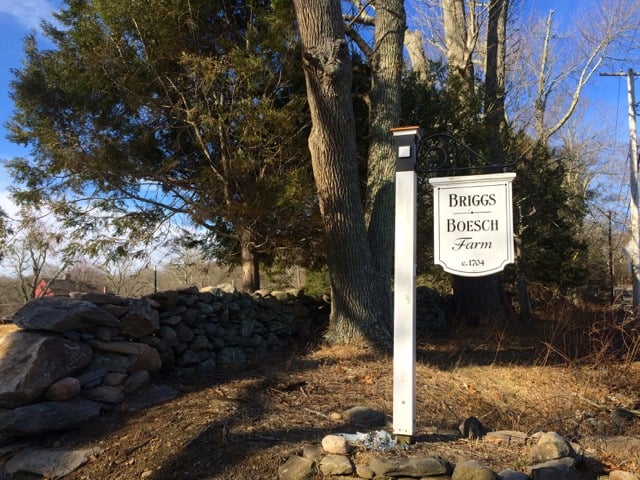 The controversial new well at Briggs-Boesch Farm that was dug in order to provide water for processing chickens at the farm.

When the town leased the Briggs-Boesch Farm to poultry and livestock farmer Patrick McNiff in 2011, it was with the understanding that McNiff would be able to process his chickens at the farm. That goal has been stymied by the state health department requirement that McNiff have a public water supply for the chicken processing and now the Town Council has to decide just how involved the town should be in the operations of a private farmer on public land.

The farm, on South Road, is part of the EG Municipal Land Trust and since McNiff moved to the property, land trust members (town resident volunteers) have been the liaisons between the farmer and the town.

McNiff and the Land Trust jointly paid for a well to be dug on the property. The Dept. of Environmental Management approved the siting of the well as did the state Dept. of Health (DOH), at first. But after the 300-plus-foot well had been drilled, DOH noticed a stream within 200 feet of the well that they had overlooked initially. DOH said having a stream that close to the well would require additional water testing going forward, adding cost and oversight duties.

With this creek a little more than 100 feet from the new well, Dept. of Health regulations require additional testing.

McNiff’s response was that he would take on the license for the well and the additional testing costs and oversight, but DOH said the town had to be the well’s licensee, since the town owns the farm.

“I didn’t want the town to have to be involved,” McNiff said Monday night, at a joint Town Council-Land Trust meeting at Swift Community Center. He said he had hired a professional wellhead operator, who would handle all the testing and maintenance issues.

At the meeting, however, council members had questions.

“I guess this is my concern: Are we in this business of farming?” said Town Councilor Sue Cienki.

“I think we still have some major issues to tackle,” said Councilor Mark Schwager. “The issue of the well was a trigger to look at the bigger picture of the Land Trust’s mission and how Boesch Farm fits in.”

Schwager was referring to the number of hours town employees were spending on Boesch Farm-related activities. Many of those activities had been done by former Planning Department employee Juliana Berry, who was laid off in September.

According to Town Planner Lisa Bourbonnais, if the Town Council allows the public well, town employees (mainly from Public Works) would spend an average of three hours a week on well-related issues.

“We need more oversight than just Pat’s well operator,” Bourbonnais said, saying that the town-employee hours cost out to about $4,900 a year. Maybe there’s a way to cost share with McNiff and the Land Trust, Bourbonnais suggested Wednesday. The Land Trust has its own revenue stream – income from the property currently leased by Happy Hearts on South County Trail.

Bourbonnais said additional oversight would be necessary for liability reasons. In other words, if a customer were to sue because of illness related to a Pat’s Pastured chicken, the town as well as Pat’s Pastured would very likely be targeted.

“Understanding the risk and then deciding if that risk is too great or not is the first issue at hand,” said longtime Land Trust member Doug Brown. “In fairness to Pat, he’s running a business. He’s counting on processing poultry on site – it’s always been part of his plan.”

Right now, McNiff transports his chickens and his mobile processing unit to Jamestown, where he can hook up to town water. That weekly fieldtrip takes more time and time, of course, is money.

“I don’t want to feel that I’m damaging Pat’s business directly,” said Schwager, however “it was not the strategy when Boesch Farm was purchased. It was to preserve the open space. It was to provide basic infrastructure for a farmer to come onto to the land.”

For Land Trust member Tracie Truesdell, however, a public water supply is basic infrastructure in the 21st century. She recalled that the former tenant, an organic fruit and vegetable farmer, had hoped to make jam to sell. Under today’s regulations, he would need a public water supply. And she argued that the well was for the farm, not the farmer.

The Town Council and Land Trust plan to meet again to further discuss the issue. No date has been set.