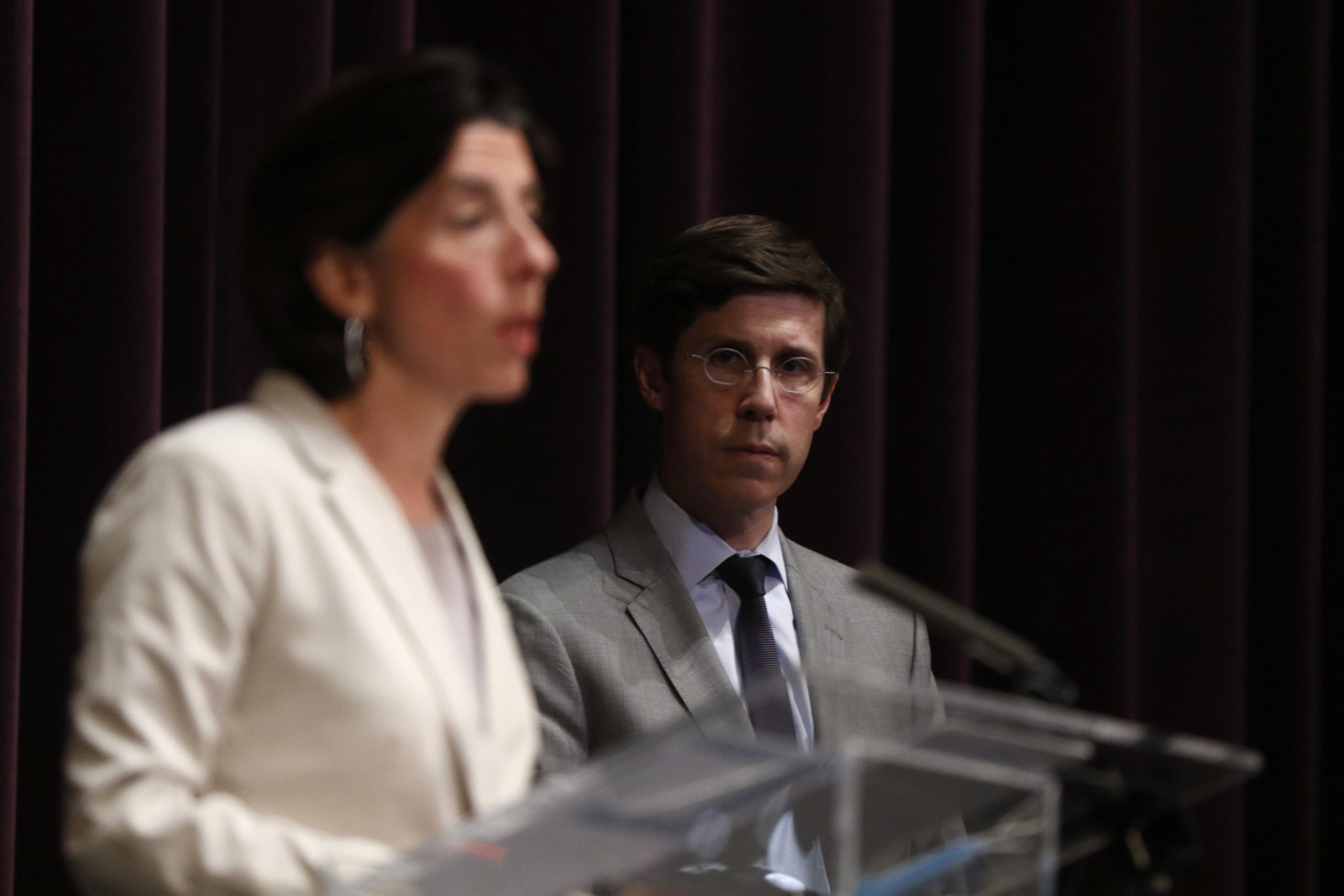 There were 107 new cases of COVID-19 in Rhode Island Wednesday, for a total of 15,219, and there were 10 deaths, bringing the death toll to 742 people. The number of people in the hospital with the virus continues to hold steady. The number of confirmed cases in East Greenwich – 70 – has not been updated since Friday. Find all the latest data on the DOH data dashboard HERE.

At Gov. Gina Raimondo’s press conference Wednesday afternoon, she announced that state executive branch employees would be able to participate in a federal “workshare” program, allowing the state to use federal CARES Act funding to save on personnel costs.

That’s important because the state is looking at a massive $800 million deficit over the next three years.

“If we were to have to close that deficit without additional federal aid, it will be devastating,” she said. “There will undoubtedly be layoffs, furloughs, extensively.”

Brett Smiley, acting Dept. of Administration head, said the funding is available to nearly all executive branch employees, union and non-union. The idea is employees who volunteer to participate in the 12-week program that starts June 15 would work 40 percent less (for a full-time employee, that would mean working three days instead of five). They would be paid by the state for the hours they work (60 percent of their regular work week) and they would receive workshare money – federal aid – for the hours they don’t (the other 40 percent).

The DOA is asking volunteers to step forward by Monday. Smiley said he hoped to see 25 percent to 50 percent participation. At 25 percent, the approximate savings would be $5 million.

Of the roughly 8,000 employees in the core executive branch, about half will be eligible; Smiley and Raimondo said they would like to see somewhere between 1,000 and 2,000 employees participate.

The program will run from June 15 to Sept. 6. Employees who sign up for the program are also be eligible for the $600-a-week supplemental unemployment pay Congress approved as part of the CARES Act through July 31. With that extra $600, employees would see significantly more than their weekly paycheck for the first seven weeks. From Aug. 1 to Sept. 6, they’ll make less than their weekly paycheck. Smiley said participation is required for the entire 12 weeks so that it balances out.

“In an era where we are looking at terrible choices and need to find savings anywhere we can, this is a good start while we wait for news about additional federal aid,” Smiley said. “We’re able to provide an option for our employees without impacting their life economically in a challenging time.”

Raimondo asked other branches of government to also consider leveraging the workshare program to cut their costs immediately. She said it’s a way to save millions of taxpayer dollars quickly while avoiding layoffs and furloughs.

The governor also addressed worries expressed by residents over the use of helicopters and National Guard in the streets seen Tuesday.

“I’m not gonna lie and pretend that there aren’t attacks being planned all around the country but I am gonna tell you we know what we’re doing, we are on it and I am prepared to do what is required to keep Rhode Island safe,” she said. Raimondo was referring to the looting and destruction in downtown Providence overnight Monday. Several cities in the state announced curfews Tuesday night but there were no flare ups of violence or destruction in the state overnight Tuesday. Brockton, Mass., however, did see extensive destruction Tuesday night.

Raimondo said she was happy to hear that Trump Wednesday signed a provision to extend the use of the Guard until Aug. 21.

“I think that’s great news,” she said. “We are relying heavily on our guard.”

As for the looting and vandalism from two nights ago, Raimondo said it remains an active investigation and they will continue to try to determine who organized the events, holding anyone involved accountable.

She also assured the small businesses that were vandalized or looted just as they were starting to fully reopen under Phase 2 that the Commerce Department was ready to help them with anything they needed.

“The visual of seeing the COVID plan or the, ‘We’re back open after COVID!’ and a smashed window is so difficult to see,” she said of the damaged businesses.

In order to enable health safety during upcoming protests, Raimondo said staff members from the Department of Health would attend the protests to provide information and resources about COVID to protesters. This will include encouraging social distancing rules, distributing masks and informing protesters about testing sites. They will likely be wearing t-shirts to identify them as DOH staff.

A prayer vigil is planned for Thursday at 4 p.m. on the State House lawn; a protest march is planned for Friday at 4:30 p.m. There’s also a protest planned in East Greenwich on Sunday at 1 p.m. at the corner of Cliff Street and First Avenue (read about the original protest HERE).

Raimondo also urged anyone who plans to attend but lives with someone who is older, sick or has an underlying health condition to consider the risk.

“Although I will never tell you to not protest and not exercise your rights, I am going to tell you this: I am begging you to exercise extreme caution out of concern for the loved one you have at home who could get very, very sick or worse if they get the virus,” she stressed.

She said she isn’t sure whether or not she will attend any protests since that would violate social distancing rules.

“I’m certainly there in spirit and vocally advocating that we take action to finally get rid of institutional and individual racism,” she said. “Maybe I will attend on the outskirts to show my support.”

Raimondo also said she met with Brother Gary Dantzler from Black Lives Matter in Rhode Island, noting her admiration for him and his work. She said she’s spending a lot of time listening to people in the community and listening to what they need.

“The people I’m meeting with who live in Rhode Island, like Brother Gary and others, they say please don’t mistake us for these folks who are coming in and looting,” she said. “We actually want to make change.”