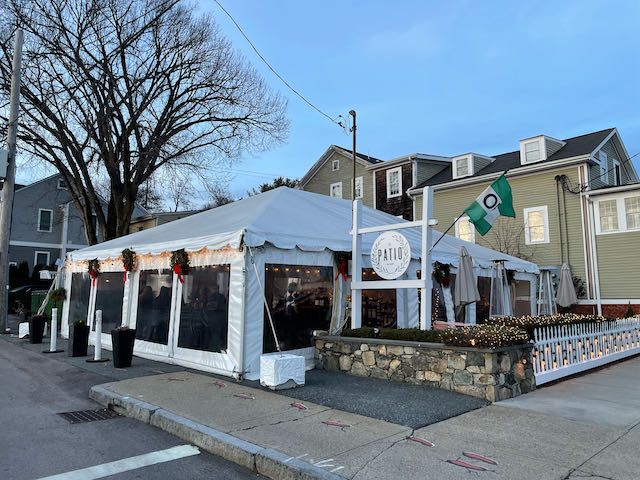 The Town Council ran through a final list of restaurants needing renewal of their liquor and/or victualing licenses Monday night – a yearly happening – approving all but the license for PB Bistro, which is closed and in receivership. That license now reverts to the town and can now  be sought by another business.

Low Key, a Main Street bar that opened earlier this year, had faced the possibility of a show-cause hearing Monday because of repeated license violations. But the council accepted a settlement put forward by Town Solicitor Andy Teitz requiring Low Key to pay a $4,000 fine and accept that it has two dings on its license (from three noise violations over a three-day weekend – to be treated as one – and one after-hours violation).

The longest discussion by far (lasting more than an hour) was about The Patio, which sought not just renewal, but an expansion of two aspects of their license. They asked  the town to allow them to offer entertainment and amplified sound seven nights a week, up from the two nights for which they currently have permission.

There were two main sticking points: tent size and the license expansion requests.

First, according to Teitz, the Main Street eatery was in violation of the town’s building code because its tent was too large. State law dictates temporary tents be no larger than 400 square feet and the tent that’s been up in the parking lot since summer 2020 is around 600 square feet. Teitz acknowledged the town did not enforce the building code initially, citing the extraordinarily dire business circumstances brought about by the COVID-19 pandemic. But, he said, that didn’t mean the town was in the wrong when it did notify owners Jason and Angel Winpenny about the violation in July 2021.

Teitz suggested the town allow the tent to remain but with The Patio only using 400 square feet of the space and blocking off the rest. Councilman Mike Donegan said the whole point of the rule on tent size (which comes from the state building code) was safety, particularly during harsh weather events. He argued that Teitz’s plan would still leave a fundamentally unsafe tent in place.

Meanwhile, Sean O’Leary, lawyer for The Patio, argued as he had on Nov. 22 that state COVID rules superseded town rules making the tent allowable until April 1, 2022.

“The General Assembly says we are still in [a] pandemic,” O’Leary said, so the emergency powers are still in place. He submitted a memo Monday stating his arguments: Memo Supporting Application.

But he also said discussing the tent should not be part of the business of this meeting, which was renewal of licenses. The town has cited The Patio over the tent and the matter will be heard in Municipal Court Jan. 19. O’Leary said debate about the tent should happen at that time.

After extended discussion, in which Town Manager Andy Nota said the town building inspector (who was not in attendance) did not find the tent posed an imminent danger, the council put off action on the tent pending the Jan. 19 hearing.

But for several councilors, the tent infraction seemed like part of a larger pattern of disregard for town ordinances. Teitz outlined violations for which The Patio had been cited in the past year in a memo to the Town Council, abbreviated below:

All of the violations have been resolved, save the tent size, but the sheer number of violations made councilors very reluctant to grant the restaurant license expansions.

Teitz suggested the council renew the licenses already in place, deny any expansions without prejudice and allow the owners to reapply for those expansions after July 1, 2022. He said that would give The Patio six months to show it was in compliance.

Angel Winpenny said they were very sorry about the violations and that they were done out of ignorance.

Councilor Mike Donegan took issue with that, saying, “Every business has to know the law.”

“This council and especially our town manager have done everything possible to help businesses in town,” said Councilor Caryn Corenthal. “Everyone else has complied. If you cared about the citizens of East Greenwich, you would have sought permissions. You would have checked before you [acted].”

“If this was just once or twice, that would be one thing … but this is one of the few [establishments] that I have seen over and over and over,” said Councilor Renu Englehart. “I want them to succeed. But any permission they ask for now, I do look at with cynical eyes.”

Council President Mark Schwager said he was in favor of Teitz’s recommendations. “In my mind, consideration of expansion of the license is [the restaurant’s] conduct. The recent action … would be [a strike] against expansion.”

The only councilor who was open to granting the expansions was Mike Zarrella, who suggested they could have the extensions at least until the municipal court date. However he acknowledged, “There’s nothing I want more than to get you guys what you want but it’s getting hard.”

Town Manager Nota said he thought it was a good idea for The Patio to wait six months before reapplying, and sounded an optimistic note: “There are a lot of applications that could be applied for. The applicant can still go to Zoning…. I think they’ve got lots of options.”

The council voted 4-1 (Zarrella casting the no vote) in favor of license renewals without expanded entertainment and amplified sound, through April 11, the date of the first Town Council meeting following the anticipated end of state COVID rules April 1.