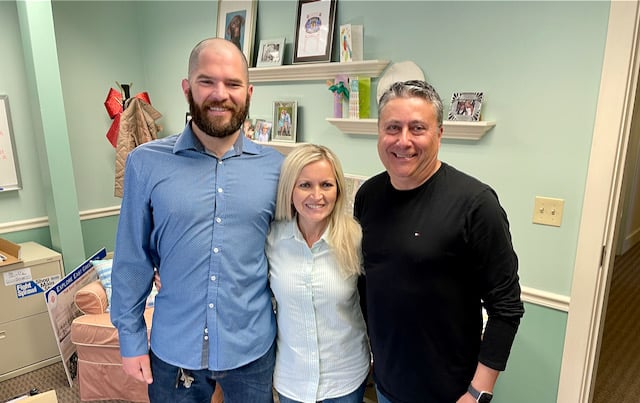 Just a few months after she was named town planner for East Greenwich, Lea Anthony Hitchen has taken that same job for her hometown of Portsmouth. Hitchen has spent most of her professional career in East Greenwich, having been hired in 2005 as EG’s land use planner. Her last day is Friday.

She was named interim town planner in November after the departure of longtime department head Lisa Bourbonnais. After a search, she was hired as the permanent town planner earlier this year.

“I’m taking this Portsmouth job for my own quality of life,” Hitchen said, noting her commute will go from 45 minutes each way to 5. Hitchen and her husband have two children, ages 9 and 4.

Her decision is not without regret.

“My favorite part of the job is my work family here – I really enjoy every personality in the DPW-Planning office,” she said last week.

Hitchen has long been the staff member for the Zoning Board and the Historic District Commission, a role she said she was proud of.

“I really enjoy helping residents through the HDC process, the Zoning Board process,” she said. “Going through the HDC or Zoning process can be like trying to learn a foreign language if you’ve never been through the process before. And I think I can pat myself on the back for getting people through that process. I’ve enjoyed doing that, helping people.”

Hitchen said she was also proud of her work getting the Historic Cemetery Commission up and running in 2013.

“I’ve participated in many of their cleanups and restorations. I think I’ve been to almost every one of the 95 cemeteries in town,” Hitchen said. “I’m really interested in the history of the town and being out in the field. I really like learning about the people that created this town and there’s no better way to learn about the history of the town than learning about the people who are buried here.”

Another accomplishment Hitchen is proud of was a $400,000 historic preservation grant she got for a new slate roof on Town Hall, which maintained the integrity of the historic building while saving the town a lot of money.

Having started in East Greenwich just a year after getting her masters in planning, Hitchen said she learned a lot and was given many opportunities early on for which she was grateful.

“Lisa Bourbonnais and Lee Whitaker were the best mentors that one could ask for,” she said – Whitaker was town planner before Bourbonnais. She said former Town Manager Bill Sequino helped her a lot too.

“I loved working with the HDC and the Zoning Board. They’re fabulous people. They’re efficient and knowledgeable,” she said. “And I really enjoyed working with everybody in this office. They have been an absolute pleasure and I will sorely miss them.”

The Planning Department is back down to two employees for now, with Planning Analyst Aaron Lindo – who has been with the department for several years – and new Asst. Town Planner Bruce Lofgren. Town Manager Andy Nota said the search is on for a new town planner.