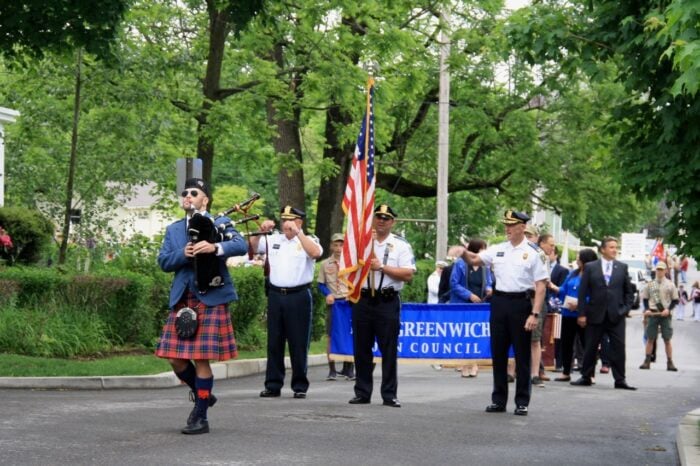 The Town of East Greenwich’s annual Memorial Day Parade will take place on Monday, May 30,  at 10 a.m.

The parade will step off from Academy Field and wind through the Hill and Harbor District by way of Mawney Street. It will then continue to First Avenue (Rt. 401) for a brief wreath-laying ceremony at the World War II Memorial on the corner of Cliff Street. The parade will then proceed north on Main Street to the Town Hall for closing ceremonies to conclude at about 11 a.m. Patrick Donovan, Curator of the Varnum Armory Museum, will preside as the master of ceremonies. The Grand Marshal is James R. Essex, former longtime scoutmaster for Troop 2 B East Greenwich, which is celebrating its 100th anniversary.

Spectators will be delighted by multiple marching bands and various local groups showing their patriotic pride. A few new groups are participating for the first time such as the Hill and Harbour Neighborhood Association and Set the Barre Performance Team. Closing ceremonies will include a recitation of the Gettysburg Address.

This parade, and the Town’s other parade on Veterans Day, is a longtime tradition by one of a handful of Rhode Island communities that continue to honor the living and the dead of past conflicts.

There is NO RAIN DATE. In the event of inclement weather, a ceremony will be held inside the Swift Community Center, 121 Peirce Street, at 10 a.m. including participants from Divisions 1 and 2. All are welcome as capacity allows for.

Originally established as Decoration Day in 1868 by General John A. Logan, commander-in-chief of the Union veterans’ group known as the Grand Army of the Republic, it was a time for the nation to decorate soldier’s graves with flowers, wreaths and flags. With that tradition in mind, residents are encouraged to show their patriotic spirit by decorating their homes with red, white and blue for all to see and enjoy.

Memorial Day is a day to honor and remember those men and woman who perished while serving in America’s military. It is a time to focus on patriotism, bravery and the American spirit. There is no better time than now for all East Greenwich residents to embrace the true meaning of Memorial Day in light of the challenges we are all facing.

On Memorial Day, the American flag should be flown at half-staff from sunrise until noon only, and then raised briskly to the top of the staff until sunset, in honor of the nation’s battle heroes.