Tale of Two Walkouts: One Sanctioned, One Not 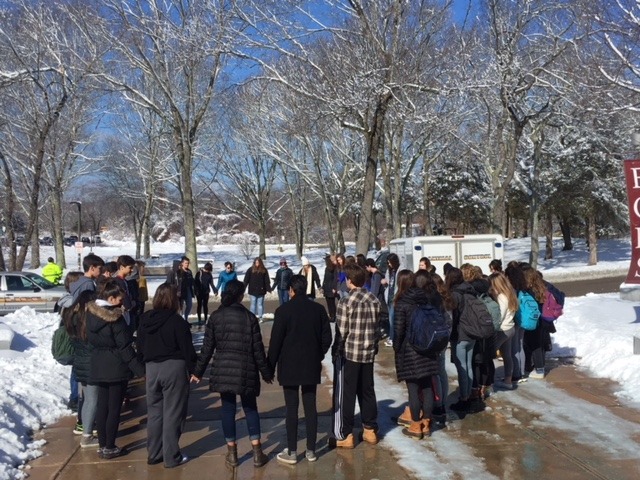 About 50 students walked out of the high school Wednesday morning to hold a 17-minute silent vigil to honor victims of the school shooting at Stoneman Douglas HS in Florida Feb. 14.

East Greenwich, R.I. – About 300 East Greenwich High School students took part in walkouts Wednesday morning, to honor those killed in the school shooting in Parkland, Florida, last month and protest school shootings. But it didn’t go quite as planned.

Some student organizers had agreed to hold the walkout in the auditorium Wednesday as per school administration wishes – as many as 250 students went to the auditorium during Advisory (a weekly free period during which special assemblies are held, and students can visit teachers or work on homework). But another 50 or so defied school officials and held their vigil in front of the school.

What started with just three or four students who left the building at 10 a.m. Wednesday grew as others walked out to join them. According to one student who participated, school administrators watched as they walked out but did not try to stop them.

The students stood in a large circle, holding hands in silence in front of the school for 17 minutes. School Resource Officer Bert Montalban stood nearby. Afterwards, as the students went back into the school, they were asked to sign in. Later, those students got an email from Principal Michael Podraza:

“This email serves as a reminder that if you have not received permission … you need to remain in the school building for the duration of the school day. After considering all the surrounding circumstances, you are being sent this email as a written warning alerting you to potential escalated consequence should you exit the building in the future without prior parental or administrative approval.”

Student sign posters of support for those who died in Florida Wednesday.

The students in the auditorium also held a silent vigil, heard from a variety of speakers, and learned how they could register to vote and contact their elected officials. Organizer Abby White was happy with the turnout and said it was a positive event.

She acknowledged that some were critical Wednesday of the auditorium “walkout” but thought the goal of student engagement was achieved.

“I think we made a strong message to students about them getting involved,” White said.

Some students said they felt trapped in the auditorium and were angry that they were not able to join the students outside.

One student said administrators funneled them into the auditorium.

Frustration had been bubbling up for many days, with some students unhappy after school administrators placed prohibitions on the walkout. Citing safety concerns, Principal Podraza said students could gather in the outdoor courtyard at the center of the school rather than in the front. Then, with Tuesday’s big snowstorm, the walkout was moved, again by administrators, to the auditorium.

Senior Zoe Pellegrino, one of the original organizers of the walkout, got frustrated when the student-led protest seemed to be taken away from the students.

“Having this organized just by us was important,” Pellegrino said Wednesday afternoon. She pushed back against the idea that going out to the front of the school provided a safety concern, noting that students are allowed to eat lunch in front of the school every day.

Pellegrino was among the students who participated in the vigil in front of the school.

“It was very, very powerful,” she said. “We all held hands for the 17 minutes, as silent as we could be.”

“My intentions and hopes … were to have as many people as possible … participate in 17 minutes of silence and solidarity…. Clearly, paths got crossed and a lot of confusion and fear of consequences arose. It is clear that two very different events took place today…. I’m extremely disappointed with the way our school and administration handled the idea of a genuine walkout.”

Another student who walked out said, via Facebook Messenger, “I walked out because the point of the protest was a ‘walk-out’ not a ‘sit-in.’ We as young adults are encouraged to take part in the world and have a voice…. Being outside with a fairly large group of my peers was amazing. It was very nice to see how many people cared about the cause and were willing to risk punishment.”

Freshman Jordan Kalinsky expressed her frustration with not being about to join the group out front in an open letter to Principal Podraza on Facebook: Dear Mr. Podraza.

In an email later Wednesday, Kalinsky said, “What matters now is what we’re trying to do to make sure the administration hears our frustrations about our right to protest and their lack of support.”

When asked for comment about Wednesday’s events, Podraza said this, via email:

“At the end of the period leading to advisory, all students were directed to go to advisory or to the optional event being run by the EGHS Civic Action club as would occur with any Wednesday advisory block where an optional event was occurring. However, some students elected to walkout of the building. No student has lost extra-curricular activities as a result of today’s events.”
While the two walkouts were different, leaders of both spoke of similar aims going forward.
“I hope people continue to stay involved, going to marches in Providence or doing things within the school,” Pellegrino said.
“We encouraged the students to stay engaged and involved,” Abby White wrote in a Facebook post. “We understand that passions were high and opinions were many, but we need them all to move forward and make real change.”
After this story was posted, Principal Podraza sent an email to the school community with his takeaways from Wednesday’s events. Here it is: Email from Mr. Podraza.