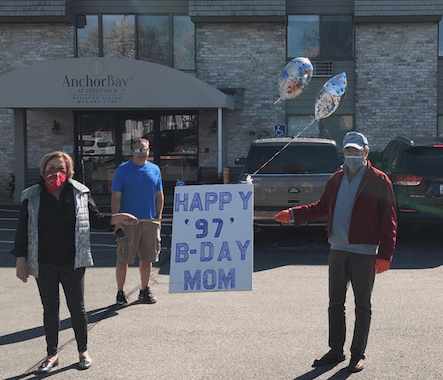 Above: Family of Gabrielle Rhault brought greetings to her on her 97th birthday: Daughter Denise Emery, Jeff Ferland, and son Robert Rhault.

No visitors, lots of health screenings, in aim to keep residents healthy

Nursing homes in many states have been hit hard by the coronavirus COVID-19. In Rhode Island, 17 nursing homes have had confirmed cases of COVID-19, according to the state Dept. of Health. Golden Crest Nursing Centre in North Providence has had more than 50 residents test positive and 12 had died as of Tuesday.

It’s the grim reality of facilities that care for people who are elderly and often have multiple pre-existing health issues. The residents can’t completely self quarantine – they need staff to help them with many daily activities. And the people who work in these centers spend the rest of their time outside.

In East Greenwich, St. Elizabeth’s Nursing Home has not had any confirmed cases of COVID-19, according to communications director Mary Rossetti.

“We started with just restricting time periods for visitors in early March. Then very quickly the state went to no visitors at all,” Rossetti said. They also began screening everyone who came into the facility – every day, every employee – checking temperatures, and asking a variety of questions: how do you feel today, do you have a cough, runny nose, body aches, etc.

A staffer at St. Elizabeth’s with the smoothie cart.

It’s a challenge for everyone. Rossetti said the staff has been working hard to keep residents connected with family, through videos, Skype, and Facetime calls. Some residents are still married and their spouses can’t come to visit – that’s really hard too, she said.

Tom Dresselhouse’s father, George, is a resident at one of St. Elizabeth’s “Green Houses,” the 12-resident buildings designed to replicate a home setting. Before the no-visitation rule, Tom visited his dad, who is 93, nearly every day.

“When the COVID-19 situation was unfolding, I tried to explain just how bad things might get, and that people in nursing homes were most vulnerable to contracting the virus,” Tom said. “I’m not sure he was able to comprehend what I was telling him.”

Tom said his father is beginning to understand that things are different than they were just a few weeks ago.

A photo of John Sullivan’s mother, Margaret, taken by a staff member at St. Elizabeth Manor in Bristol.

“Due to his military experience [during World War II, George was a radioman on a minesweeper in the Aleutian Islands], he is a rule follower and watches out for other people. I’m sure the staff has convinced him that this is serious and that visitations aren’t allowed for the benefit of all the residents.”

John Sullivan’s mom, 89, is at St. Elizabeth Manor, a nursing home in Bristol. She has some dementia so she is not fully able to comprehend what’s happened. The staff have been good, he said, sending texts and pictures daily.

“She looks happy and healthy,” Sullivan said. “You just want to hold her hand a little bit and talk to her. I understand the precautions, but it’s hard.”

Even with everything that’s been happening, St. Elizabeth’s is not closed to admissions.

“Someone could fall and break a hip and need emergency surgery and need to be sent to rehab and we have a rehab,” said Rossetti. “Anyone who comes from the hospital has to go into a 14-day quarantine upon entrance.”

A fact of life at nursing homes is that residents die.

Rossetti said if a person is dying during the pandemic, administrators at St. Elizabeth’s make a plan with the family. Depending on the situation (i.e. no infectious disease), family members could be present. “It’s case by case,” she said.

A sign on the front door at Anchor Bay Greenwich

Assisted living facilities are also having to cope with the threat of COVID-19. Visitors are not allowed and group meals – a hallmark of many assisted living communities – have stopped, with residents largely confined to their apartments.

At Anchor Bay Greenwich on Main Street, staff members are screened as they come in (temperature checks, health questions), then handed a mask to wear during their shift.

For Lindeow, the primary concern is keeping residents healthy and engaged, even if they can’t get out like they are used to. The staff comes by daily with smoothie carts and art carts and even the occasional candy cart (they stock diabetic candy too). And they’ve been letting residents use a stationary pedal exerciser and the Wii console (bowling is a favorite) in their rooms. After each use, the items are sanitized before being shared with another resident.

It’s hard on family members too, said Lindeow. “It has been quite an adjustment. We’ve been calling them frequently and they call us.”

Not surprisingly, she said, “it is very hard to not see your mom every day if that’s what you’re used to…. We take it one day at a time but we always look to fine-tune things. We keep going back to the drawing board: How can we better what we’re doing now?”

In some cases, it helps that the people in nursing homes and assisted living centers have already experienced a lot in their lives.

“They recall being put in similar situations when they were young,” said Lindeow.

Tom Dresselhouse said his father, who joined the Navy at age 16, seemed to be handling the crisis pretty well.

“He’s called me a few times since the no-visitation went into effect, and is in good spirits,” Tom said of his father. “He asked me if there is anything he can do for Pam and me! Truly a living member of The Greatest Generation!”