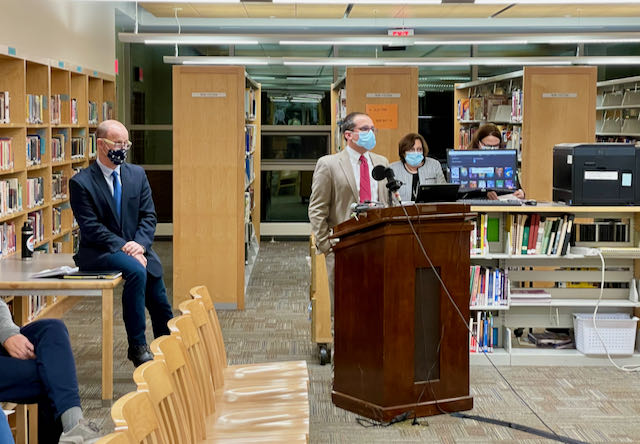 What do the results of the RICAS state standardized tests really say about students in East Greenwich and how the district is doing? Those are the questions school administrators tried to answer at last week’s School Committee meeting, presenting lots of data about the results and comparisons between groups of students. The RICAS tests were taken last spring by elementary and middle school students in grades 3 through 8.

High school SAT scores were more favorable – with EG students at the top of the state in both ELA and math, with 92.2 percent for ELA and 66.8 percent for math. The percentages for differently abled students were far lower (42.9 percent and 14.7 percent, but were also at the top in the state results; there was no data for economically disadvantaged students due to small sample size). 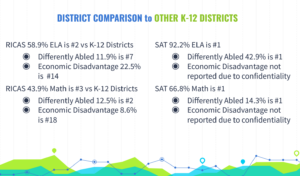 In terms of the RICAS scores, said Neil Marcaccio, former Meadowbrook Farms principal and now director of multi-tiered system of supports, “There’s nowhere to go but up. The things we’ve put into place these past three years will show up in the next three years.”

The biggest challenge for district is to help students with special needs and those from economically disadvantaged households to do better overall.

“We will never be able to close achievement gaps if we stick to low or even typical growth,” said Asst. Supt. Michael Podraza. EG was in the typical growth column.

“Seems we are under-delivering across the board in math,” said School Committeeman Tim Munoz. “Is there some root cause?”

Podraza said the curriculum had been inconsistent, COVID happened, and some of what was being tested was not being taught until after – for instance, there were geometry questions on the grade 5 RICAS but geometry wasn’t taught until later in the year.

Munoz expressed his frustration at what he saw as a disdain for standardized tests.

Quoting legendary football coach Bill Parcells, he said, “‘You are who your record says you are.'” He added, “It’s sobering data.”

During public comment, resident Peter Carney asked what was the district’s aim for a year from now.

“The point about standardized testing certainly not being the only thing … there has to be some detail and some measurements,” he said. “And we have to do better than this.”

“Part of the SIT process … will have them submitting RICAS improvement plans to RIDE,” she said. “They will be setting school-based targets.”

In an interview after the meeting, Meyer said, “There’s much to work on. [The results] certainly give us something to focus on and this district will do that.”