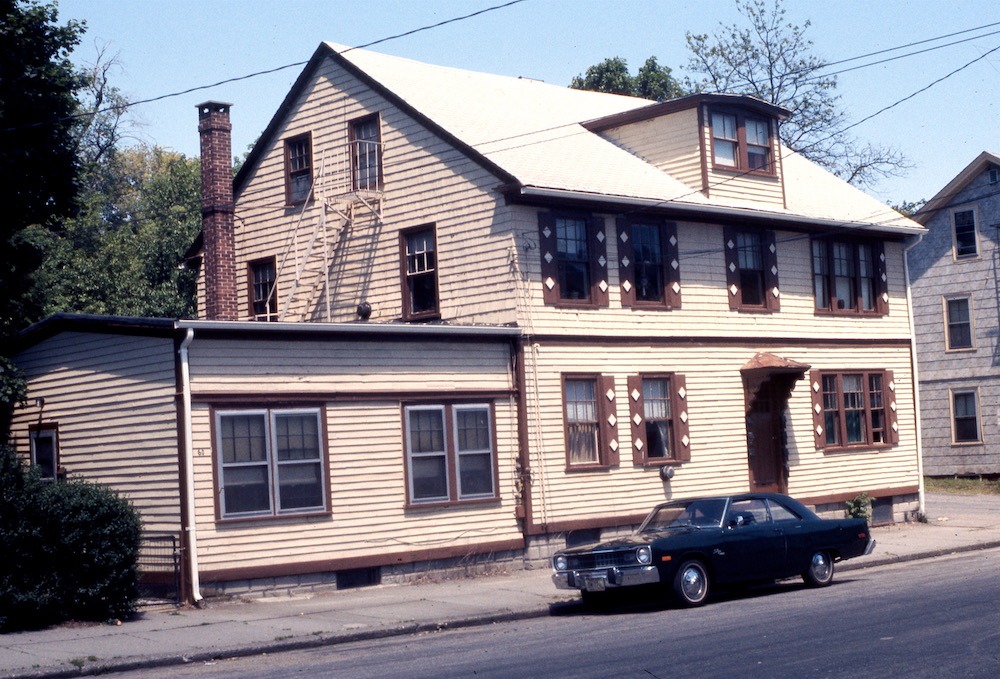 It’s the kind of one-two punch that wakes up even the soundest sleeper. “Fire!” shouted with an urgency from down the stairs of your rambling, all-wood apartment house, followed an instant later by the unmistakable smell of smoke. I’ll never forget that primal fear I felt early on Oct. 27, 1976, in my third-floor attic garret at 66 King Street in East Greenwich.

It happened again Saturday: same place, same freezing outside temperature, and almost at the same time of day. I suppose that, like the tides lapping at the shore of Greenwich Cove, just beyond the nearby 180-year old King Street railroad bridge, fires in old, ramshackle apartment houses are regular occurrences.

But that doesn’t ease the sheer terror you feel as you’re clambering out of your bed on a 24-degree morning and trying to remember basic fire-escape rules. You jump into some clothes while trying to keep your head low. Smoke is quickly filling the place you have called home for the past 18 months, and is blurring dawn’s grey light.

You shuffle to the locked door leading to the stairway, gingerly placing a palm on it. It’s definitely warm. Urgent shouts of “Get out!” are now coming from more than one voice down below. So you push open the door amid a flood of smoke, generated by tongues of flame, beginning to engulf the stairway. You crouch forward and run like hell down the twisting two flights of stairs, bursting through the front door and gulping gloriously fresh air once you’ve made it safely to the street.

Only then, still catching your breath, do you begin to hear the wonderful sound of sirens screaming north on Main Street and then east on King. The fire horn atop the station adds to the early-morning cacophony, sending volunteers to the scene of the conflagration with its numbered blasts.

Any first apartment packs a lot of memories. After snaring my initial post-college job, reporting for the Rhode Island Pendulum under publisher Bill Foster in 1975, I knew I had to find a cheap place to live. I’d grown up in East Greenwich, just off Middle Road near the new high school, but my parents had absconded to Connecticut while I was away at college. Somehow I learned that Joe Zenga, Jr., whose family ran Zenga’s Restaurant on Main Street for decades, was also a landlord who had bought 66 King Street in 1967 (and he still owns it today). So we met and I signed up for one of its two third-floor apartments for the princely sum (for a starting weekly-newspaper reporter, anyway) of $90 a month. 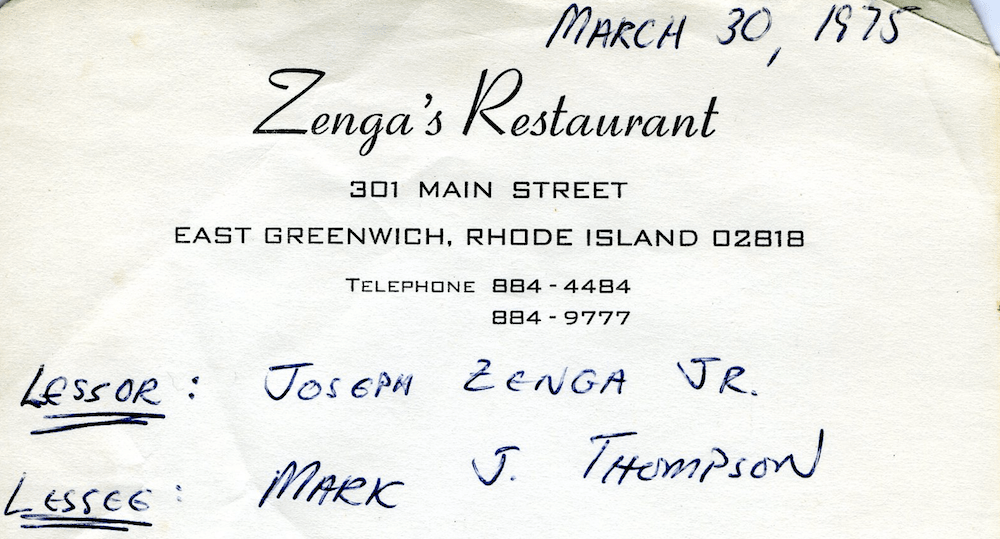 The old house was built by East Greenwich blacksmith David Pinniger, according to local historian Bruce C. MacGunnigle. Seems fitting that the guy who built it also worked with fire.

My cozy charmer was L-shaped, looking west up King Street toward the courthouse, and north into a back yard with a big tree. It was cramped, sure, but not as cramped as the turning stairway you had to climb to get to it. High-school pal Steve Tessitore and I had to amputate a pair of legs off my oak desk to get it up there. The desk was heavy—it began life at the Providence Public Library—and we grunted and groaned as we threaded it up and around the sharp stairway corners. We plopped it into place on the third floor after reattaching the legs with some metal mending plates.

The only space for a bed required a person to slide into it sideways: if you suddenly awoke mid-nightmare, you’d hit your head on the roof-sloped ceiling. There was a gas heater standing at one of edge of what passed for the kitchen-living room. Such a heater reportedly sparked Saturday’s fire. Mine, which I recall as more of a mini-furnace, would ignite with a mighty “whoosh!” when I turned it on. But that was rare, because I had to pay for the heat. Luckily, my Pendulum rounds meant I wasn’t there much. I never trusted it.

My fire 42 years ago had a more careless cause. It began shortly after 6 a.m., accidentally set by a fellow tenant smoking in his second-floor bedroom. It took four EGFD trucks, a brigade of firemen, and 1,200 feet of hose hooked up to a pair of hydrants, 20 minutes to douse the flames. “Dispatcher Fred Cookson and Deputy Chief Joseph Lawrence suffered burnt hands while putting out the blaze,” the Pendulum reported in its next issue. Thankfully, no one else was injured.

I also penned one of my few editorials during my 30 months at the Pendulum for that edition. “From purely a personal point of view, it’s reassuring to know that the Town of East Greenwich has dedicated policemen such as Thomas Joyce and Stephen Vander Pyl, who at considerable personal peril made sure the apartment building was vacant after arriving on the scene,” it read. “The 33 volunteers who extinguished the fire are to be heartily congratulated, for doing such a fine job on the coldest morning of the approaching winter. And, from a purely selfish point of view, we’d like to thank the Ladies’ Auxiliary of Fire Station One for brewing the best cup of coffee we’d tasted in a long time.” 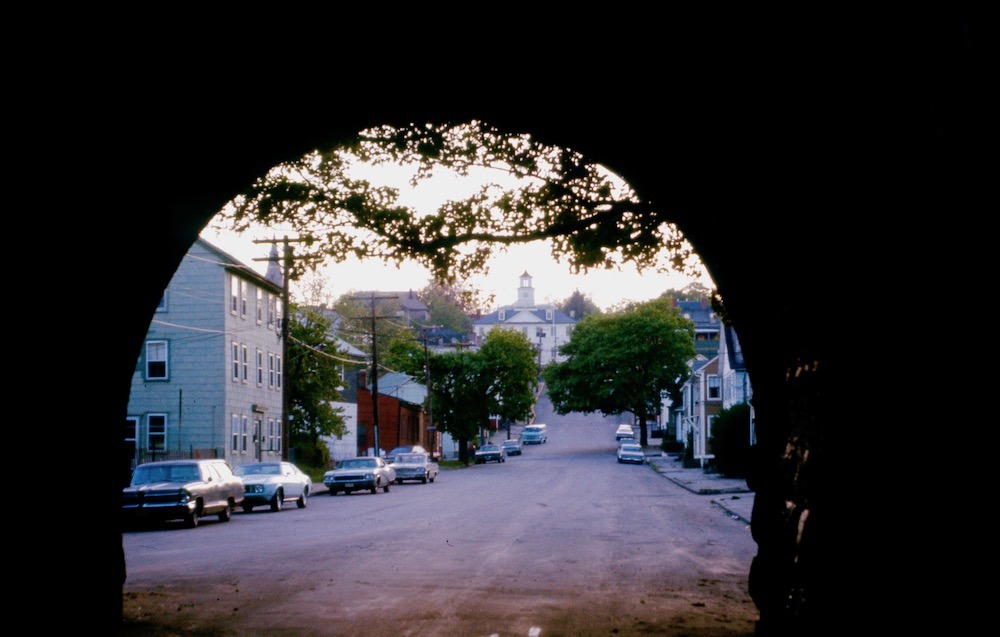 A day or two later, I returned to the apartment, which was reeking of smoke but otherwise OK. But the walls and ceilings of the stairway leading to it looked like the blackened inside of a creosoted chimney. On the outside of my Apt. #6 door hung one of those 1950s’ IBM “THINK” signs, given to me by my father (as suggestion or a joke, I never knew). It was now a charred ruin.

As a Pendulum reporter, I got to tour the fire-damaged place with Fred Miller, the veteran and much-beloved chief of the East Greenwich Fire Department.

“What’s this?” he barked at me after we’d entered my apartment. It seems my west-facing sleeping quarters on the top floor got so hot on summer days that I had installed an air conditioner in the only window leading to the fire escape that I might have needed to save my life. It was a big and bulky unit, which used to cool the Pendulum’s darkroom. Bill Foster had given it to me—I deemed it a bargain—but only then realized how much it might have ended up costing me.

Five of the seven residents, including me, had to come up with new living arrangements. King Street was just beginning its renaissance. One month before the blaze, in fact, Gilbert Hempel, running the town’s 300th birthday celebration from the old East Greenwich jailhouse at the foot of King Street, praised Zenga for slapping a fresh coat of paint on the place. “The eastern end of King Street,” Hempel said, “stands a very good chance of being upgraded.”

For a week I moved into to the Foster home on Howland Road, where Bill’s wife, Jane, generously and repeatedly laundered my clothes to minimize their smoky scent.

Zenga’s flat, while no palace, at least fit into the budget of a rookie reporter making $125 a week (before footing the weekly tab run up at the Kent Char-Broil, that is). But in late 1976, the fire seemed to have wiped out much of the town’s cheaper housing.

I had to move to Apponaug.

Top photo: The author lived in the apartment with the fire escape on the third floor at 66 King Street. That’s his 1974 Dodge Dart Swinger Special, bought in 1976 from East Greenwich’s Moone Motors for $2,400.