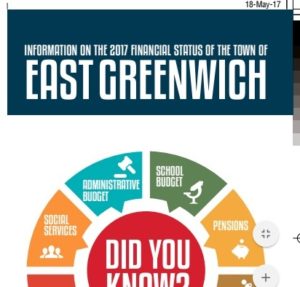 The first statistic that caught Eugene Quinn’s attention was the 51 percent listed in a flyer from the Town Council that went out to residents last spring. The flyer said property taxes had increased 51 percent since 2011.

“From what I knew from my tax bill, it wasn’t anything near 51 percent,” Quinn said in a recent interview. Quinn moved to town 40 years ago, but other than an unsuccessful run for School Committee in 2012, he’d remained largely uninvolved in local government. The flyer changed that. Quinn, an assistant professor of mathematics at Stonehill College in Massachusetts, became a member of the School Committee’s finance subcommittee. And he started attending Town Council meetings.

At a Town Council meeting in early June, Quinn got up during public comment to question the 51 percent calculation. Council President Sue Cienki said she would set up a meeting for Quinn with then-Finance Director Kristen Benoit, but that never happened.

By June 19, the town had a new town manager (Gayle Corrigan) and by June 30, it had a new finance director (Linda Dykeman).

On his own, Quinn got some information about the tax rolls from now-retired Tax Assessor Janice Peixinho, but it was when he got ahold of the tax rolls themselves that he really got busy.

The tax roll is a public record of every single tax bill in town. Quinn liked that the rolls were just the numbers – “no assumptions, no calculations.”

He converted the tax rolls from 2011 and 2016 into text files and wrote some computer code (Python, for those of you who know of such things) to get the numbers out of that.

Quinn produced a video to explain his work and asked the council to print a retraction. That did not happen.

In December, however, Cienki suggested meeting with Quinn to talk about that figure (as well as Cienki’s claim that the town’s unfunded pension liability is $86 million and Council Vice President Sean Todd’s assertion that the tax levy will be $100 million in 15 years).

In a statement issued last week by Quinn and Musella, they said Cienki said the town would publish corrected data on the tax increase between 2011 and 2016.

After the Dec. 20 meeting, there was some effort to agree on a joint statement that would highlight both where the two sides agreed and where they did not. However, according to Quinn and Musella, that proved impossible.

The three of us [Quinn, Musella and Peterson] could not come to a consensus on certain key issues, leaving us at an impasse before Peterson would provide complete comments. We have incorporated comments that Peterson did provide. We do not represent that the comments attributed to him fully articulate his position.

Those “key issues” are outlined in their statement here:

The major points of contention were: (1) whether we could all agree to accept as fact the pension documents prepared by Peterson (last spring for the teachers’ arbitration), and the data they contained without independent review; (2) whether we could accept as fact that projected expenditures will reach $100 million without complete supporting documentation; and (3) Peterson’s assertion that we agreed to have Cienki and Todd approve this joint statement before distribution.

In interviews last week with both Quinn and Musella, they said that Peterson and Cienki in particular were very unhappy with the teachers contract approved by the School Committee last spring after protracted negotiations.

“Their position was the School Committee absolutely gave away the store on the teachers contract,” said Quinn.

In that contract, teachers got no raise for the first year, a 2 percent raise in year two and a 2.25 percent raise in year three (in addition to previously negotiated step increases). But the teachers also agreed to health savings account (HSA) insurance, which is anticipated to lower health care costs for the district considerably.

Quinn and Musella said Peterson dominated the discussion on the tax levy and pensions. According to Quinn, Peterson arrived at the meeting with a stack of papers 18 inches high.

“Our intention was to understand the town council’s point of view, not Stuart Peterson’s,” Musella said.

Quinn said Todd’s assertion that the tax levy would jump to $100 million in 15 years was based on 4 percent tax increases (the maximum allowed) for the next 15 years. Tax increases in recent years (there was a tax decrease this year) have averaged in the 2 to 2. 5 percent range.

“I presented my argument that it wasn’t going to go up 4 percent every year,” Quinn said. To counter that, Peterson argued that deferred maintenance at the schools would increase the number. He also said interest rates would increase.

“We said, show us your computations,” Quinn said.

The unfunded pension liability discussion has centered on Cienki’s insistence that the state’s rate of return is too optimistic. But, Quinn said, if Peterson is correct that interest rates are going to go up, “that solves your investment return problem.”

“The meeting seemed to raise more questions than it actually answered,” Musella said. “Like, why did they invite Stuart Peterson to present this information instead of them?”

“At the end of the day,” said Quinn, “I would like to see policy driven by more careful analysis and more grounded in data. If we moved it a little closer to that [by meeting], it was worth it.”

A collection of documents and data referred to during the Dec. 20 meeting can be found here.