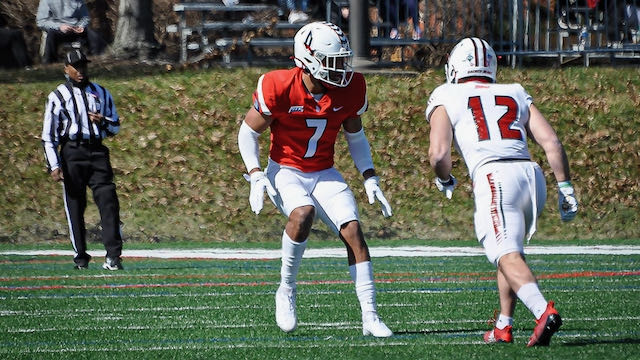 Above: Shea alum Leandro DeBrito, who plays for Duquesne, was named first team All Northeast Conference defensive back.

There’s motion. And then, there’s motion. Johnston High School got some attention on National news when Head Coach Joe Acciardo, sent player Joe Acciardo, Jr., in motion when the Panthers were knocking on the goal line door. Young Acciardo, an accomplished gymnast and dancer who has shared a stage with Justin Bieber, went into a spin of cartwheels, back flips and front flips hoping to garner the attention of Pilgrim Patriot defenders. While they were sneaking a peek at his antics, the Panthers went up the middle for a score and came away with a 29-12 Turkey Day win. The play captured national attention and also made internet news stories.

Leandro DeBrito (Shea) of Duquesne was named first team All Northeast Conference defensive back. It was his second such award. He finished the season with 56 tackles to set a record and also had several TFL’s, 2 interceptions and 3 pass breakups. He had a great game in the team’s opener against Texas Christian University, an FBS powerhouse, and recorded an interception along with 8 tackles.There should be more honors headed his way in the postseason.

Tre Jones (St. Ray’s) earned second team All NEC honors. The 6-3, 255 lb, LB was a first team choice in 2019, but had some injuries this year that curtailed his play. Still, the 2020 Pride of Rhode Island Award winner for the Providence Gridiron Club, did enough to grab second team honors. He and DeBrito may get a chance to go to the next level somewhere.

The Purple and White are 10-2 on the year and have two Rhode Islanders on the team. Cristos Argys (EG-Moses Brown) and Brian Vaganek (Narragansett) both have the thrill of experiencing playoff football at the next level.

While not making any ALL teams, Cameron Alves (Cranston West) had two catches for 55 yards and two touchdowns in Stonehill College’s season ending win over Southern Connecticut University.

Navy’s Loss! URI’s gain! Word out that LaSalle All Stater Nick Lombardo has opted out of his commitment to the US Naval Academy, and has transferred to the University of Rhode Island. If true, it is a great grab for the Rams. They have a good group coming back next year but could use some line depth both offensively and defensively.

License Please! Rumor has it that Nick Giorgio, D3 All American at Springfield College, and recently with the Orlando Predators of the Arena League, is going to be graduating from the RI State Police Academy in the Spring. Instead of putting the stop on opposing ball carriers, he will now be stopping speeders and assorted bad guys in the Ocean State. A great kid. Hope he remembers what I look like, though I’m too old to speed anymore in a car, or on foot.

He related a story from his high school days and how he has taken a mistake he made back then to guide the young boys from his Pop Warner teams to go on to play in college, if they have the chance. He related he has five grads from his program playing college football around the Northeast. That’s great! Remember, coaches, the young men under you have the same hopes and dreams you did when you played, and, one of your duties, whether you realize it or not, is to

help those young men realize those dreams. Hopefully, in the near future there will be some info in that area to help you do it.

Jake Picard (Bishop Hendricken) is a red shirt freshman at Villanova University in Philadelphia. The Wildcats are also in the FCS playoffs, representing the CAA and Picard, who saw duty in four games this year, will likely see some action in the postseason.

It was good seeing Xavier Truss on the field for the #1 team in the land, the University of Georgia Bulldogs. They play Alabama, lucky winner over Auburn in the Iron Bowl, for the SEC title. After that will be a possible CFP spot and one or two more games. Truss has been all over this year. Tackle, guard, tight end and special team blocker.

MVP Night Wednesday, Dec. 15, at the Quonset ‘O’ Club, 200 Lt. Brown Road in North Kingstown. The top offensive and defensive players from all 44 football playing schools will be honored that night. It is imperative that you have them and their family and friends there

to witness them receiving their honor. Photographs will be taken and distributed to the hometown papers of all the recipients. A first time, and, hopefully, permanent feature, will be a loop video featuring RI high school football stars, who have gone on to NFL, CFL and D1 programs over the years.

The 2022 winners of the Pride of Rhode Island and Home State Hero Awards have been chosen and they will be announced shortly. They will be honored at the Providence Gridiron Club’s Annual Awards Night next April. Also being honored will be last year’s winners, Kwity Paye (Bishop Hendricken-UMichigan), rookie for the Indianapolis Colts, who took the Pride Award and Matt Sylvia (EG-Salve) who won the Home State Hero designation. Both boys were shorted when Covid issues cancelled last year’s banquet.

Good old Bill Belichick brought in East Greenwich’s Nolan Cooney earlier this month to work him out as a kicker/punter. Cooney is just the sort of player the GOAT likes as he can hold down several positions at a low cost for the Pats. Nolan can punt, kickoff, kick FG’s and PAT’s and also hold for FG’s and PAT’s, all chores he handled at Syracuse University. The former Avenger, a testicular cancer survivor, won both the Jim DeRin and Brian Piccolo Courage Awards, while with the Orange. He was a free agent signee with the New Orleans Saints.

In a related issue, relatively speaking, Grandson Duncan (RI-CT-GCA-Presbyterian College) is LB Coach for Grey Collegiate Academy in Lexington, S.C. The War Eagles are 12-1 and go for the state title in 2A next week.

Their only loss was to a 5A team. One of their stars, Kz Adams, has accepted a full scholarship offer from Georgia State. Go to Adams-Grey Collegiate Academy-Hudl.com if you want to see some unreal running. Despite his star status, Adams played offense, defense and special teams, including kickoff. He is a great catch for GSU. Grandson Duncan leaves for Marine Corps Officer School, Quantico, in January.

It is no secret that UMass-Dartmouth likes R.I. football players. They have had particular success the last four years with Steve Gacioch (Tiverton) at QB, as he set multiple school records for passing. He got hurt and another R.I. product, Dante Aviles-Santos (Cumberland) stepped in, and won three Rookie of the Week Awards and also Rookie of the Year for the Mass. State College Conference. Word has it that Corsair recruiters are enmeshed with several Rhode Island high school stars, including 3-4 from EG and a couple from Pilgrim.

Congratulations to veteran Tiverton High coach Bob Murray, who is letting go of the reins after a highly successful 40-plus years at the helm of the Tiger program. I am sure they will give him a Golden Chair so he can sit sideline and watch future Maroon and Gold teams cavort on the field now newly named for him. Well Deserved! Good Luck, Bob, from me.

**** This release brought to you free of charge for the use of coaches, newspapers, TV/radio or anyone interested in the promotion of football in Rhode Island, by The Brooker Sports Initiative.