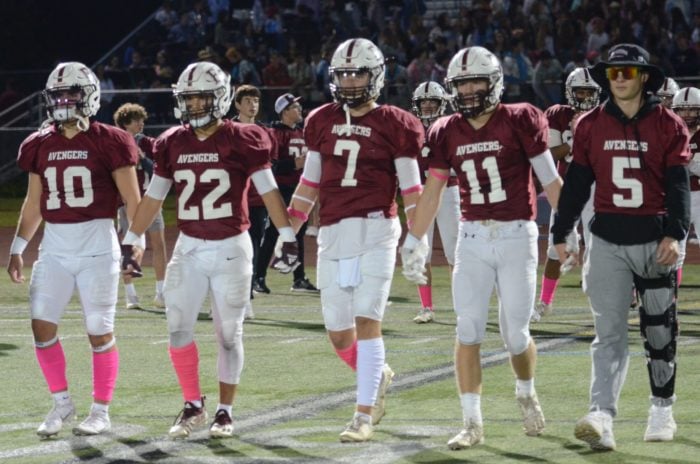 The Providence Gridiron Club is back in action and has released their event schedule for the 2022-2023 year, including their first dinner of the year on Tuesday, Sept. 21 (details below).

On Monday, Sept. 12, they held their annual fundraising golf tournament and word came back that it was a qualified success. Seventy golfers participated for a day of golf, camaraderie, gifts, prizes and food. The event is the main fundraiser for the club. It has encountered difficulties the last couple of years, but its resurgence will provide a big boost for the club in completing its task.

The club kicks off its annual spate of dinners on Sept. 21, at the Quonset ‘O’ Club, 200 Lt. Brown Road, North Kingstown. The first dinner will be Captain’s Night, with all 45 football-playing high schools in the state bringing their coaches and captains to the affair, where they will be introduced and feted by the club.

The rest of this cycle’s dinners are :

Meanwhile, here’s what’s been happening in the world of Rhode Island football:

NOLAN COONEY (EG-Bridgton-Syracuse) had a good pre-season punting for the Arizona Cardinals of NFL (53.7 Av.) and has been signed to a futures contract. Though waived for now, insiders say Nolan has a future in the NFL and possibly again with the Cards. The Indianapolis Colts might give him a look.

HARRISON LEONARD (EG-Jamestown-Avon-Notre Dame) has transferred to the University of Rhode Island, and is handling KO duties for the Rams.

JAYLEN SMITH (Shea-URI) has moved up the depth chart for the Rams. Starting as a fourth back his freshman year in 2021, he broke out the last four games to produce over 1000 yards total offense. This fall he is the Number 1 running back so far as Rhody has garnered wins over Stony Brook and Bryant and are in the top 20 of FCS rankings.

Rhode Islanders KWITY PAYE (Colts), KEN YEBOAH (Jets), THADDEUS MOSS (Bengals), TYNEIL COOPER (BC Lions -CFL), MOMODOU MBYE (Green Bay-IFL) were all on pro rosters as of this writing, with Paye holding a starting spot on the Colts. Mbye made All IFL Rookie team and 2nd team All IFL. No word on Kwity’s brother KOMOTAY KOFFIE, who was with Broncos.

XAVIER TRUSS (Hendricken) has started at left guard for the first two games at U-Georgia, the defending national champions. He looked very impressive in both wins for The Dawgs. JAKE PICARD (Hendricken) is slated for a starting spot at Villanova and SEAN COYNE (Portsmouth) is a top receiver going into his last year at University of New Hampshire. Twenty-three former RIHS gridders are on the roster of URI. UMass-Dartmouth has 24. Brown, 3, and Bryant, 4.

Coaches are urged to report their players who are doing well, especially those on the college scene as work to pick the 2022 Pride of Rhode Island and Home State Hero Awards is going on at this time.

Former Boston College Eagle, JAMES SULLIVAN (St. Ray’s in ’50’s) is running for School Committee in Chariho. Sullivan, who once held Rhode Island scoring and rushing records served once before (2010-12) for his community, and wants to serve again.

JOE RUFF, Avenger senior gridder, is on the ProJo RI’s list of players to watch. He had a good showing at the Kohl’s Professional Kicking Camp  securing a three star score as a kicker and a four point five as a punter. Overall he notched a 31 rank in the country. Some schools should be looking at him.

Answer to a past quiz: The five high schools in the state who have a one of a kind nickname, not used by any other school in the country (as of my research) are: Classical PURPLE; Coventry High KNOTTY OAKERS; East Greenwich AVENGERS; Mount Pleasant KILTIES (also Highlanders); Woonsocket VILLA NOVANS.

CARL GREENE ( EG-BH-URI-Cortland ) is on the move again and is most likely headed to UMD, where he will actually get three more years of college ball.

When is Rhode Island going to come into the modern age and rank football teams by size? Let them play in their “leagues,” but use the power point system for Super Bowls. It is more fair to smaller schools playing in “leagues” with larger & private schools and will keep larger schools playing down from getting into a Super Bowl. They may win their “league” but not have enough power points to qualify for their “size” Super Bowl.

Happened to Doug Flutie in high school. His team went 10-0, won their league but lost out for SB to a 9-1 team, which played a tougher schedule.

Writer’s Note: I am back with my Brooker Sports Initiative. Basically I will not be writing specifically for the Rhode Island Wave any more, though they have enough of my stuff to go on for another four or five months. They will be getting these releases and Ms. Grenier is savvy enough to get pics that will match the names with the stories.

Again, I need help from R.I. coaches. Let me know the names of your kids in college, going to college, and shining for you in the current season. Want to come up with my own BSI Top 33 Team! Plus more.

Bruce Mastracchio is a master of many things, including storytelling. One of his many passions is football.